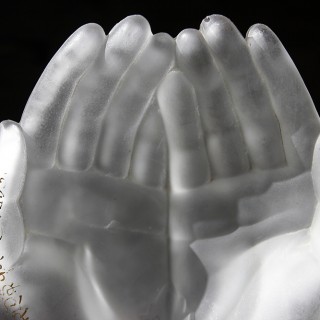 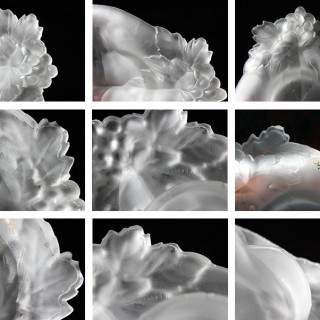 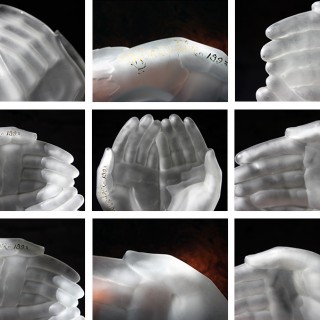 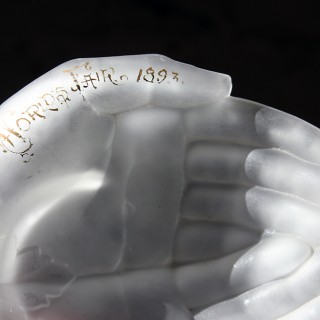 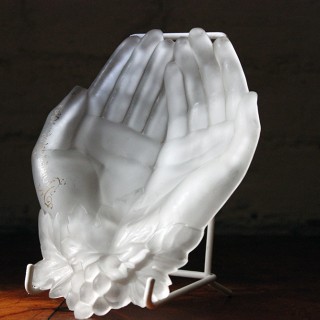 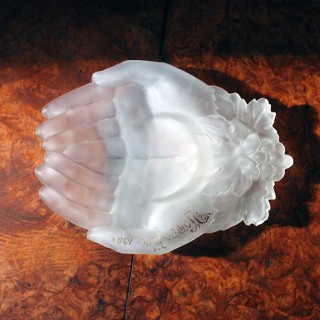 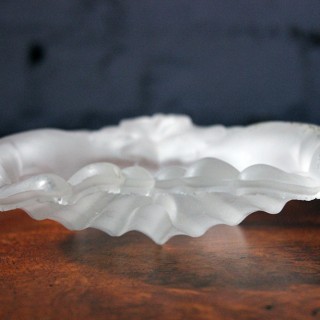 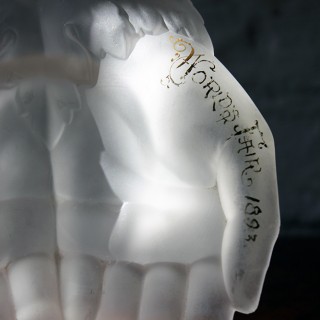 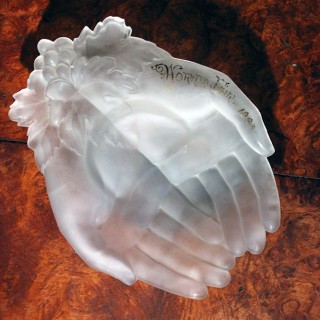 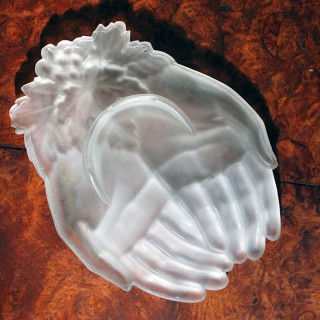 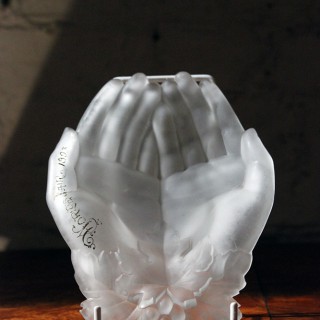 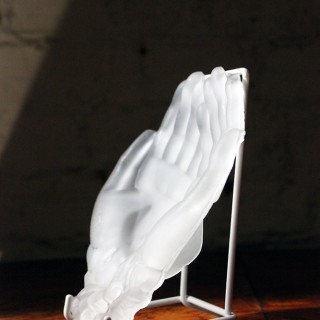 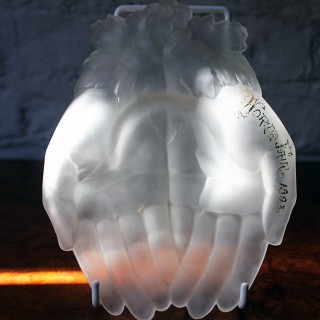 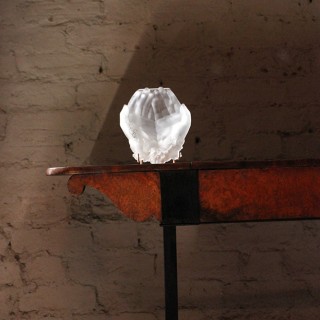 The fine quality clear frosted and acid-etched glass dish crisply modelled in the form of cupped hands or ‘gowpen’ with a cluster of grapes and leaves at the wrist, sometimes called “Queen Victoria’s Hands”, the base acid-etched with the ‘bee-case’ English Registry diamond mark for parcel 8, class 111, for the 25th of January 1876, with further stamps of the U.S. Patent date; ‘patent’ and the numbers 298609 and 31 1875 with a gilt-highlighted inscription for ‘World’s Fair 1893’ for Boston to the left thumb digit, survives from the last quarter of the nineteenth century crafted in the Holyrood Glass Works in Edinburgh, Scotland.

The design of this dish has been much replicated over the years, namely by Westmooreland in milk white. Copies of the same design abound in ceramic and metal, and in various sizes, but all are essentially replicas of the glass original; three companies, two American and one English, are known to have produced the cupped hands dish in the late 19th century. Hatch’s original designation as a “fruit dish” has almost been eclipsed by later appellations: a calling-card receiver; pickle, bon bon, candy, nut, mint or berry dish; even a flower float and, thanks to Avon, a soap dish. According to documents preserved in the Public Records Office of the Victoria and Albert Museum, an English Registry for the design was granted on Feb. 23, 1876, to William Ford, “trading under the name of John Ford,” the Holyrood Glass Works, Edinburgh.7 The cupped hands made by Holyrood have frequently been mentioned and pictured in books dealing with English glass.

Holyrood Glass Works, Edinburgh (built by William Ford in 1815), produced fine crystal. In 1839, his nephew, John Ford took on the business and in 1855 Queen Victoria granted him the licence of being “Glass Maker to Her Majesty” the place now assuming the title of “The Royal Holyrood Glass Works”. John Ford died in 1859, and his “prentice piece”, a cut glass fruit boat on stand in the “Irish Taste” can be seen at Huntly House Museum in the Canongate, At The Royal Holyrood Glass Works glassware of the finest quality was made and engraved by such clever artists as John Smith of Bangor Road, Leith, an expert in heraldry, and J. H. B. Miller, famous for his classic and sporting scenes.

Chicago’s 1893 World’s Columbian Exposition was particularly successful, and famous, thanks in part to a staggering array of cultural and technological marvels which debuted there, including some of the first demonstrations of electrical power, the world’s first Ferris Wheel, and the first servings of the candied popcorn that would later be dubbed “Cracker Jacks”. The fair’s Palace of Fine Arts, located in today’s Jackson Park neighborhood, housed over 10,000 artistic works from around the world; mostly oil paintings from across the United States and throughout Europe.

This fine quality dish would essentially have been an expensive souvenir at the fair in Boston where it was inscribed 18 years after it was actually made in 1875 in Edinburgh. From our research it seems not many were made or survived as we cannot find another marked in this way.

A beautiful and rare collectable, which has been on a fascinating journey (and amazingly survived two trips across the Atlantic ocean), and a memento with a stunning ethereal ambience.

Possessing a lovely tactile satin like finish, the dish is in near perfect order; with one small chip to the corner of one of the grape leaves, as shown, but otherwise no condition issues to speak of.