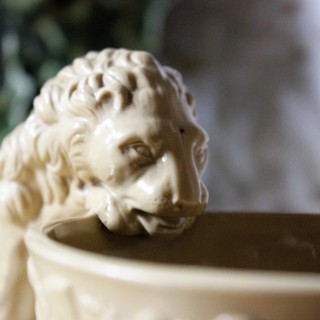 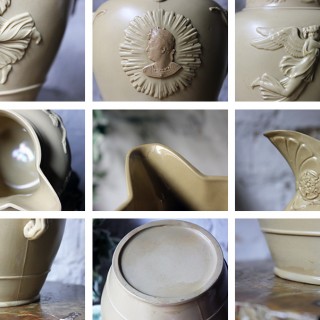 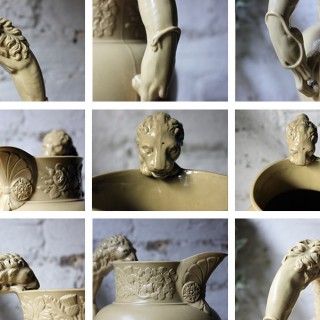 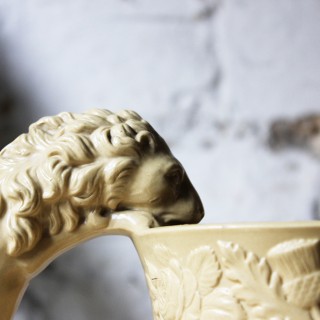 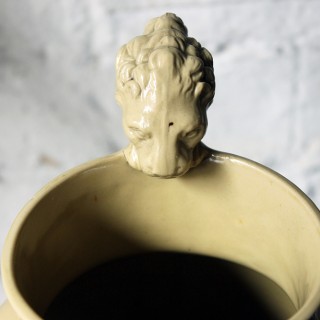 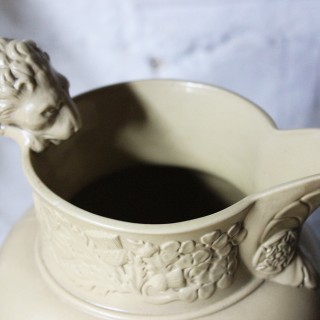 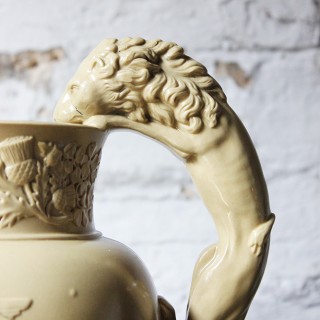 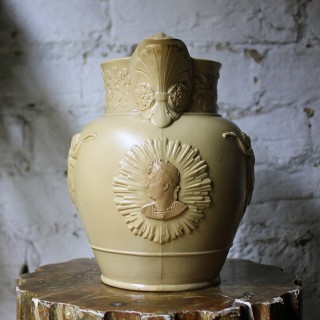 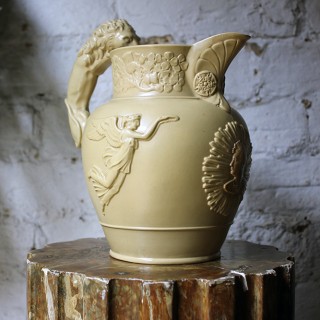 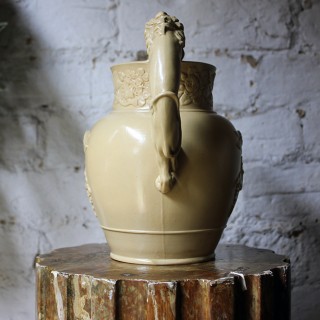 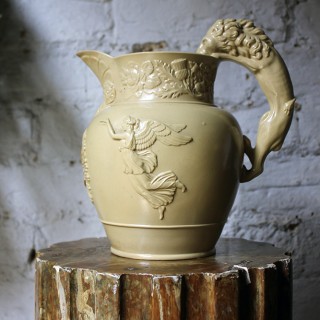 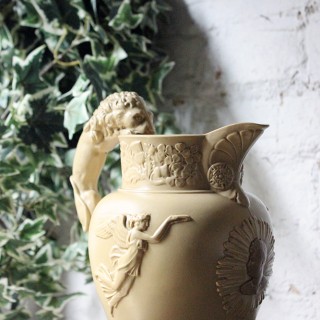 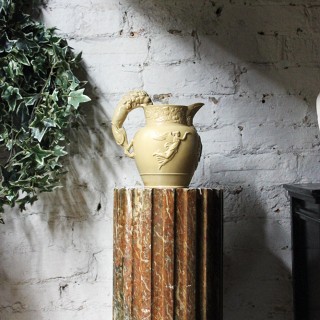 The rare relief moulded buff baluster form jug, in smear-glazed stoneware, made in 1830 to commemorate the death of King George IV, having a bulbous body, short straight neck, pinched spout and over-arching handle, standing on a thin foot-ring, the unusual handle moulded in the form of a lion, below the spout a bust of King George IV in profile facing dexter, imposed on a sunburst, flanked either side by a flying Victory holding out a wreath towards him. On each side of the neck are a rose, a thistle and a shamrock, with a two stylised rosettes around the spout. The interior glazed and glossy, the underside recessed and smear-glazed.

Relief moulded jugs (some with ceramic or metal lids), in a wide variety of design, were popular in mid-19th Century homes, where they were used for water, beer, milk and other liquids which might now be kept in bottles, cans or plastic jars. The smear-glazing makes the most of the way that colour-stained clays show off crisply-moulded ornament, whilst the stoneware would be durable in an everyday setting.

This is an early design and the animal handle is unusual. It was produced in at least three different sizes, though few examples have survived and none of them are dated. The George IV portrait is similar to medals made to celebrate his accession in 1820, so the jug may have been made at that time or more likely to commemorate his death in 1830.

A jug with a handle formed as a hound and hunting scenes, made by Phillips & Bagster of Hanley, has been dated by Henrywood to 1818-23, the earliest that such relief moulded jugs are known to have been made. Versions of that jug were subsequently made by John Denton Bagster, 1823-28, and by William Ridgway, though not until 1831 or after. All three operated from the same works at Hanley and employed James Leonard Abington (who later became Ridgway’s partner) as a designer and modeller. It therefore seems possible that this jug, made 1820-1830, was made by Phillips and Bagster, or J.D.Bagster, and perhaps modelled by Abington.

This jug is also illustrated in “British Royalty Commemoratives and Value Guide” by Douglas Flynn and Alan Bolton; p.163 with a value of £850 – £950.

A very scarce piece with such wonderful stage presence.

The jug has some restoration to the lip of the spout as per the photographs. Elsewhere there is a little discolouration to a small section to the base at one side but other than this there are no chips, cracks or damages to speak of. We have given it a light clean. These jugs are rare survivors with many breaking and discarded.