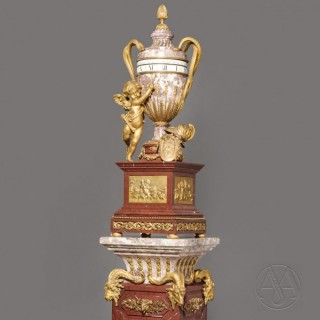 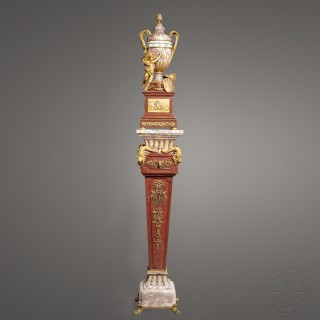 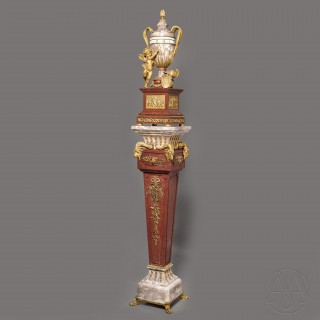 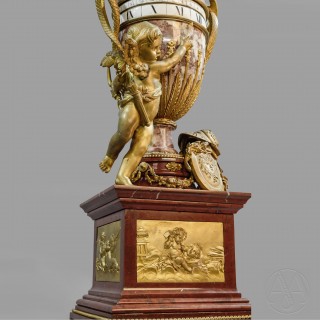 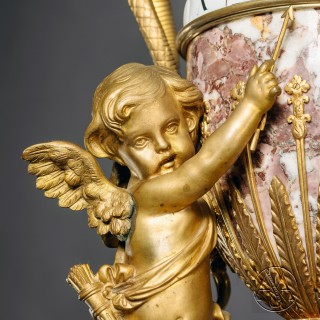 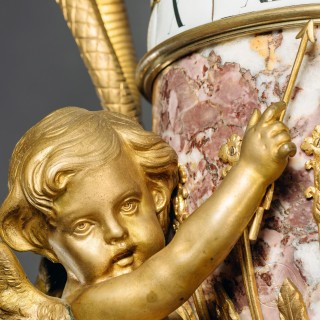 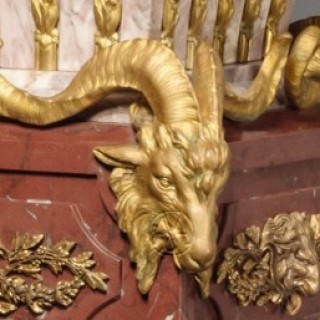 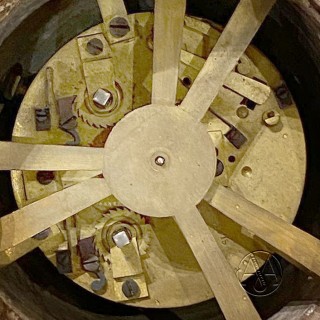 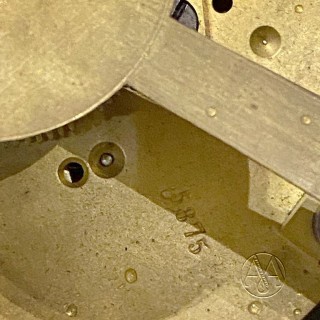 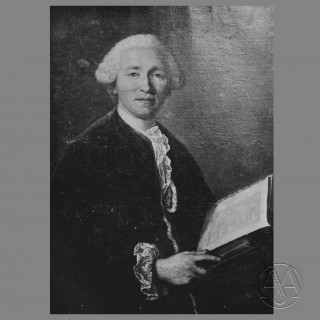 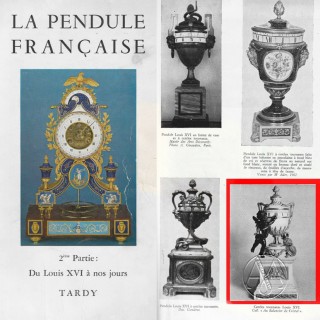 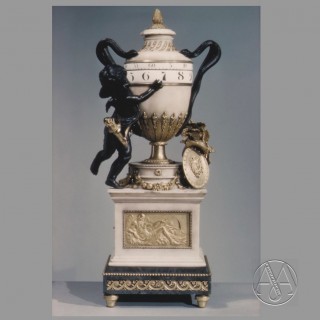 The eight-day twin-train movement with circular plates and lateral lever escapement on a gilt platform, with cut bimetallic compensation balance, flat balance spring and index regulator, striking the hours and half-hours on a bell.

The dial having twin revolving chapter rings with white enamel cartouches with Roman numerals on a revolving ring, with a revolving minute ring above with Arabic numerals, the time indicated by Cupid pointing with an arrow.

This fine annular dial or ‘cercles tournants’ clock with its integral marble pedestal is a particularly impressive and well-proportioned example with finely chased and finished gilt-bronze mounts.

Of Fleur de Pêcher marble, the body of the clock is of vase form mounted with gilt-bronze serpent cast handles, with twin rotating cercles tournant enamel cartouche chapter rings and flanked by a standing figure of Cupid with outstretched hand with an arrow indicating the time; the turned socle is on a square section Rosso Levanto marble plinth embellished with the shield and helmet of the Roman goddess Minerva, the patroness of wisdom, the arts and war, the sides of the plinth inset with gilt-bronze plaques emblematic of the arts ; the conforming Fleur de Pêcher and Rosso Levanto pedestal of tapering square section, the angles mounted with gilt-bronze rams head mounts, the front panel with an acanthus and laurel leaf festoon, raised on splayed paw feet.

The design for this exceptional clock is a variation on a model for an eighteenth-century ‘cercles tournants’ vase clock attributed to Jean-André and Jean-Baptiste Lepaute. An example in white marble dating from circa 1775-80, with patinated bronze handles and figure of Cupid, is in the collection of the Metropolitan Museum, New York (29.180.4); the bronze mounts possibly by Pierre Philippe Thomire and Louis Simon Boizot. A further example from the Au Balancier de Cristal Collection is illustrated in Tardy: ‘La Pendule Francaise’, p. 288.

The celebrated clock maker Dufaud is known to have produced a small number of these important clocks towards the end of the 19th century and known examples are recorded with identical Fleur de Pêcher and Rosso Levanto vases and conforming gilt-bronze mounts to the present example.

This celebrated dynasty of horlogers was founded by Jean-Andrè in 1740. Settled in Paris and appointed Horloger du Roi with lodgings in the Luxembourg Palace, his innovative ideas, such as the échappement à repos of 1753, as well as his writings, including an impressive Traité d’Horlogerie, published in 1755, earned him the title maître and lodgings at the Louvre by 1759. His brother also became horloger du Roi and succeeded him in the Galeries du Louvre lodgings in 1775. The next generation of Horlogers strengthened the reputation of the Lepaute Dynasty. Henry Lepaute and his cousin Pierre-Basille bought, then subsequently divided, their uncle’s company, creating the signatures ‘Henry Lepaute à Paris’ and ‘Lepaute Oncle & Neveu’. This latter line of the dynasty continued to prosper, Pierre-Basile and his son employing the signature ‘Lepaute & à Paris’, and during the Empire they became the main supplier of clocks to the garde-meuble.