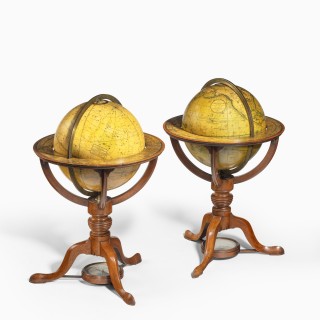 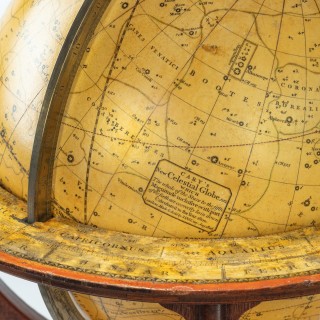 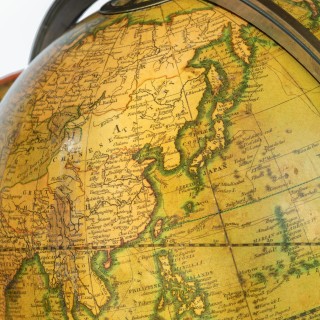 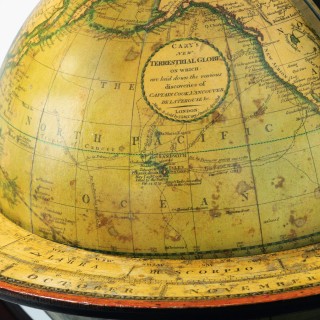 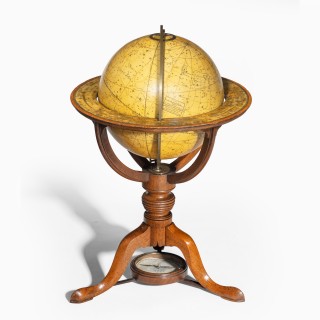 A rare pair of 9 inch table globes by Cary, each dated 1816. These globes are by John and William Cary and show the geographical and political borders drawn up following the Congress of Vienna. Each one is surmounted by a brass hour circle, within a calibrated full brass meridian, and a horizon band with an engraved paper calendar and zodiac. Each turned mahogany stand has three legs joined by the original compass rose. The terrestrial globe shows geographic entities shaded in faded tones of blue, pink, olive, green, some with red or green outlines, and dark green coastlines. The celestial globe is cream coloured, with constellations shown by curved boundaries rather than as mythological or astrological figures. Stars are shown to the fifth magnitude. Both are dated August 1816.

The Congress of Vienna was an international diplomatic conference to reconstitute the European political order after the downfall of Napoleon I. The objective was to provide a long-term peace plan for Europe by settling critical issues arising from the French Revolutionary Wars and the Napoleonic Wars.

The celebrated Cary family of cartographers and globe makers produced some of the best late Georgian globes. The firm was started in London in the late 18th century by John Cary (c1754-1835), an engraver and dealer in maps, who often worked in partnership with his brother, William Cary (c 1760-1825), a scientific instrument maker. John Cary concentrated on geographical excellence rather than on decoration. In about 1820, the Cary brothers moved their business to 86 St. James’s Street, leaving the premises at 181 Strand to John Cary’s son, George, (c1788-1859) and John Jr. (1791-1852) who traded as G. & J. Cary until about 1850.