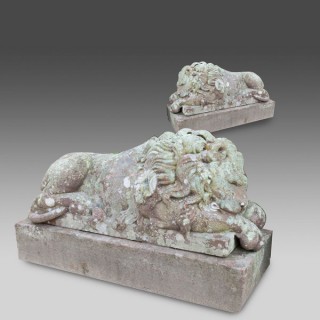 Antonio Canova, Marchese d’Ischia ( 1757- 1822 ) as you know, was an Italian sculptor, one of the greatest exponents of Neoclassicism. Among his works are the tombs of popes Clement XIV (1783–87) and Clement XIII (1787–92) and statues of Napoleon and of his sister Princess Borghese reclining as Venus Victrix. In 1775 Canova set up his own studio in Venice. In 1779 he sculpted Daedalus and Icarus which had been commissioned by Pisani, procurator of the Venetian republic; it was Canova’s first important work In 1783 Canova received an important commission for the tomb of Pope Clement XIV in the Roman church of SS. Apostoli. That same year he was commissioned to execute a tomb in St. Peter’s to Pope Clement XIII. Completed in 1792, it shows a more developed understanding of the classical aesthetic of antiquity than his monument to Clement XIV. The Lions on the monument became known as the Canova Lions & are arguably the most famous of Lion sculpture ever made. In 1805 he was appointed inspector general of fine arts and antiquities of the papal state. In 1810 he was made president of the Accademia di S. Luca in Rome. He sculpted his well-known Three Graces from 1812 to 1816. After having visited Paris to arrange for the return of Italian art treasures plundered by the French, he went to London ( 1815 ) to give his opinion on the Elgin Marbles. The success of his mission in Paris led to the reward of the title of Marquis of Ischia by the Pope. While in London, the Prince Regent, later George IV, commissioned a life-size group of Venus and Mars. Other late commissions included the Stuart monument in St. Peter’s ( 1819 ), the alteration and completion of the equestrian Napoleon into Charles III of Naples ( 1819 ), and a monument of George Washington idealized in Roman costume, erected at Raleigh, N.C., in 1821. Canova’s domination of European sculpture at the turn of the 18th century and the beginning of the 19th is reflected in countless adulations in memoirs, poems, and newspapers. “Sublime,” “superb,” and “marvellous” are adjectives frequently found describing Canova’s work in his lifetime.