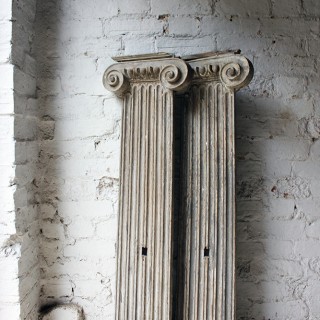 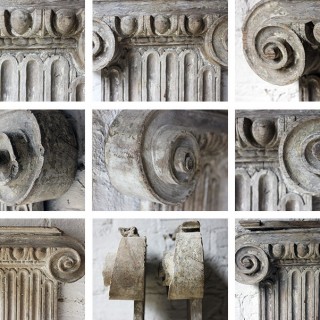 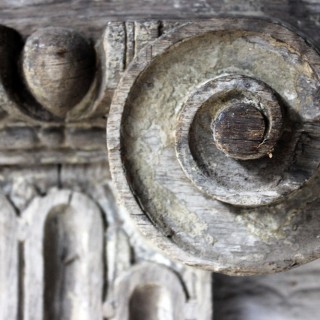 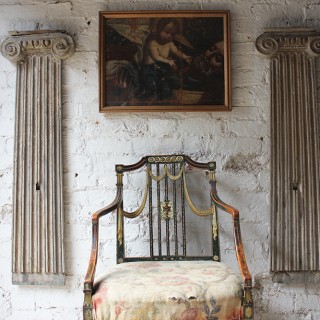 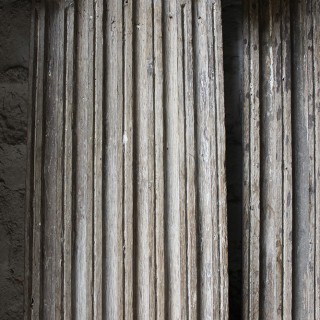 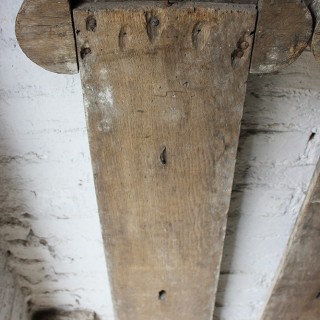 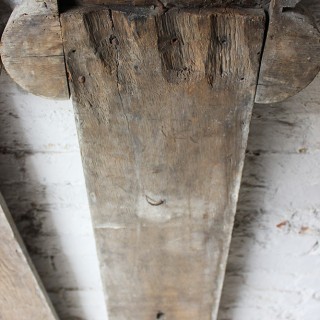 The rare and beautifully aged carved oak wall pilasters both topped by an Ionic capital, with slender abacus and spiralling volutes, above an echinus ornamented with egg-and-dart, all above slightly broadening stop-fluted shafts surviving from the first quarter of seventeenth century England.

The overall condition of the pilasters is good considering their substantial age with the oak taking on the beautifully dry patination that one finds on oak of this age with traces of possible painted decoration to each. One of the capitals to one of the pilasters has movement. There is some small amount of worm to the very tops of each which is old and dead. They both have general movement to the joints but nothing one wouldn’t expect.

The lengths of the supports suggest they are originally from a fireplace surround, being two opposing pilasters either directly alongside the grate or positioned further away as part of the overall composition panelling (see comparable photographs of Billesley Manor). This comparison to the interior of the Hall at Billesley Manor, Warwickshire is an important one. The interior is clad in panelling of the early 17th century, and adorned with very similar Ionic pilasters. See H. Cescinsky & E. R. Gribble, Early English Furniture & Woodwork (1922), Volume I, p. 310, Figure 351.

Exert from the Wood Panellings And Mantels. Part 14: “The pilaster of East Anglia and the Home Counties in the first years of the seventeenth century is usually much less ornate than the West-country style, with capitals either of plain mouldings or simple flat Ionic form. The shafts are generally carved with a flat strap-work pattern, similar to an applied fret, with little or no undercutting. The general characteristics of early-seventeenth-century East Anglian and Home County panellings are simplicity and lightness of mouldings and general refinement of details. That from the Palace of Bromley-by-Bow, Figs. 327 and 328, may be taken as a type of this kind. This woodwork is an instructive example in two ways. We know its actual date, and it is certainty local in make. The panel-arrangement, of a central upright rectangle surrounded by oblong panels, two vertically and two horizontally, with four squares, one in each corner, is, apparently, an obvious one, but is by no means usual in panellings of the seventeenth century. A similar pattern will be noticed again, later on, in an example from Billesley Manor. The mouldings of the pilasters, returning on the upright styles, indicate an early-seventeenth-century detail, as a rule.”

Pilasters themselves have a numerous deign benefits. Strong vertical lines of the pilasters adding stately look to the interior as well making the room appear higher. Projecting face and structural appearance of the pilasters add extra layer of architectural details to the room.