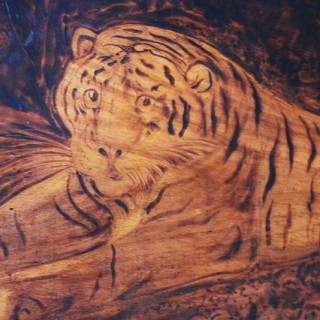 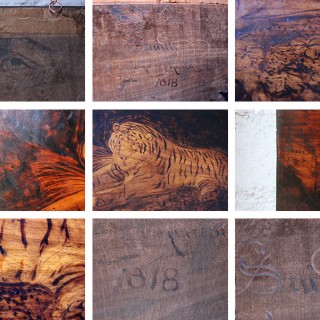 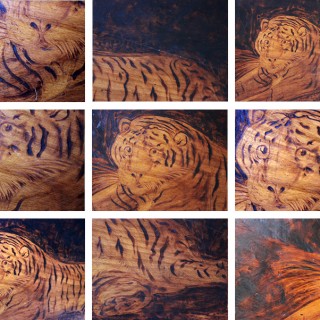 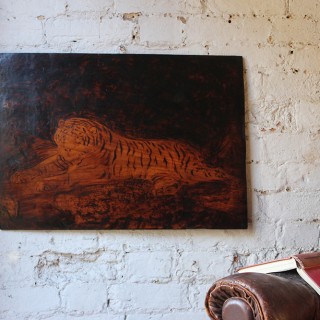 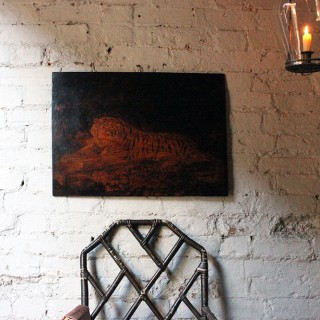 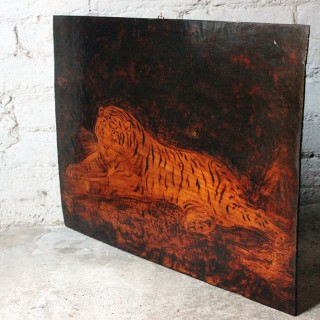 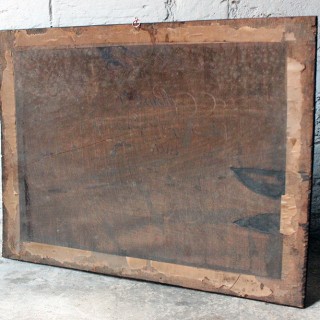 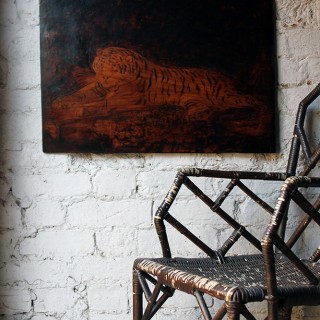 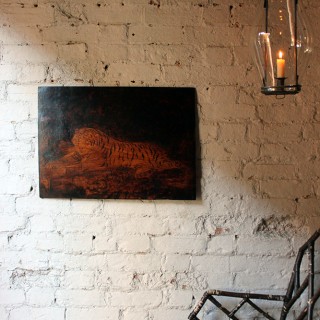 The finely-observed stained ‘pokerwork’ or pyrography panel by Joseph Smith of Skipton, north Yorkshire, depicting a tiger, after the oil by George Stubbs ‘The Portrait of the Royal Tiger’ c.1770, the sycamore (?) panel signed and dated 1818, inscribed ‘Smith, Pyrographist’ and then dated again and branded with eye motif verso, surviving from George III period England.

Poker work, or pyrography as it is now known, literally means “writing with fire” and is the traditional art of using a heated tip or poker to burn or scorch designs onto natural materials such as wood in this instance, or perhaps leather. The process has been practiced by cultures including the Egyptians and some African tribes since the dawn of recorded time. In the late 19th century, a Melbourne architect by the name of Alfred Smart discovered that water-based paint could be applied hot to wood by pumping benzoline fumes through a heated hollow platinum pencil. This improved the pokerwork process by allowing the addition of tinting and shading that previously were impossible.

English artist Joseph Smith is a rather elusive figure but a number of works by Smith have surfaced, variously dated from 1810 through to 1824 and mostly of a religious theme but also including a portrait in the Pinto Collection at Birmingham City Art Gallery. Most panels bear the same motif of the’ all seeing eye’ burnt on the back and the name Smith, Pyrographist, with others also bearing the address of 4 Medcalf Place, Pentonville, 1821 which indicates that Smith was working in a different location from what he inscribed on other panels, which was often Skipton or Skipton Castle. This particular work does not have an address inscription but it is certain that it would have been executed either in Pentonville or Skipton.

Late nineteenth century notes on the works, techniques, and tools of the artist Joseph Smith reads; “the greatest of the poker-picture makers on record was named Smith. He was a native of Craven, in Yorkshire, whose wood-drawings exhibited a high degree of originality and power. One of the best of these was a really fine portrait of Oliver Cromwell, after the famous picture by Cowper; another example being a head of our Saviour marked “Smith 1818” (the same date we see on our picture). Perhaps his best known work was that on the subject of the Annunciation, which hung for many years in the gallery of the fine old church of Skiption-in-Craven. Genuine Smiths fetched good prices in the London shops”…

A beautifully executed and finely observed work by a very intriguing artist.

The picture remains in original order overall and has a good patination across the surface with no interference or restoration to note. The board is warped and there is a horizontal crack across the front middle section from one edge to the centre due to the board being warped over time which is stable but could be restored if so desired.