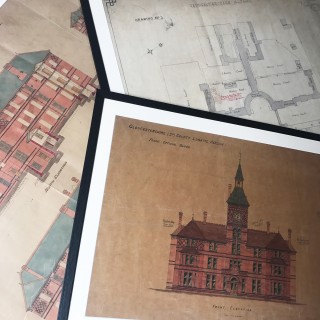 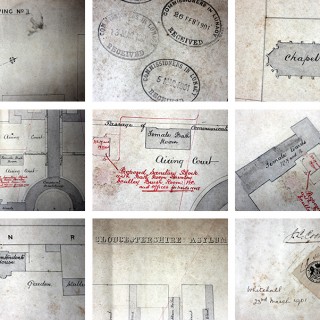 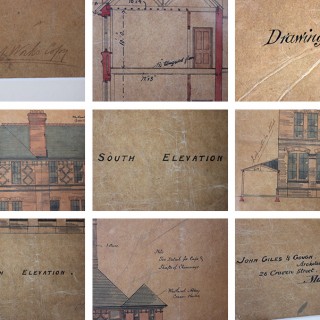 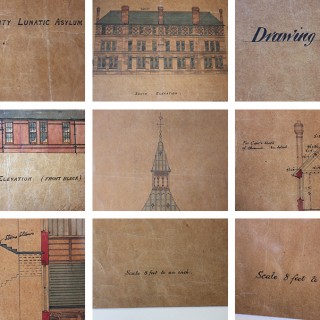 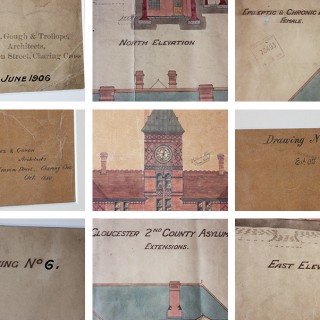 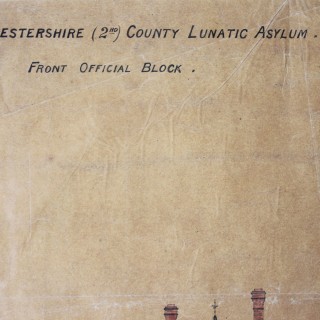 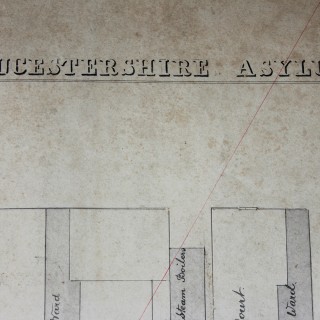 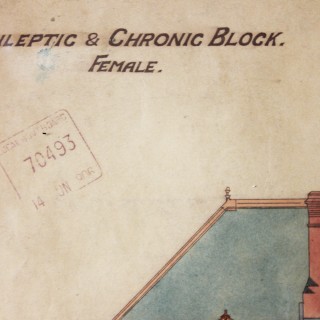 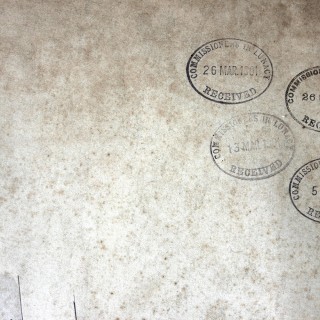 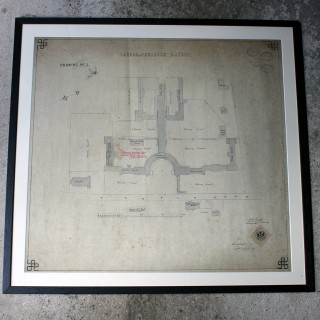 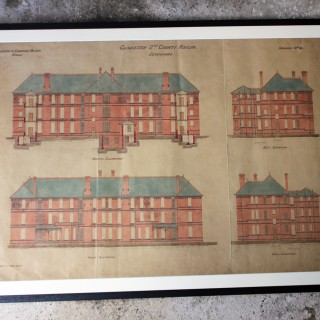 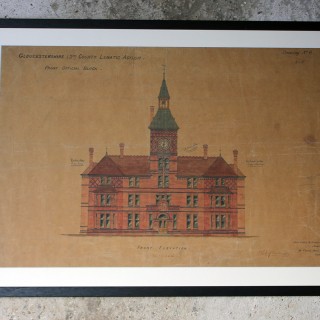 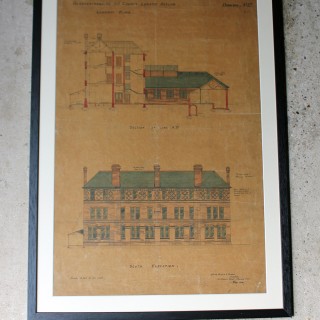 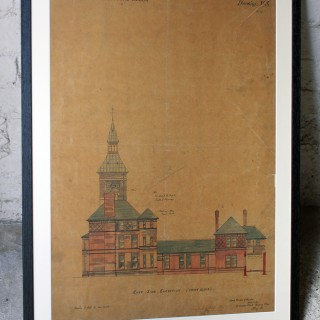 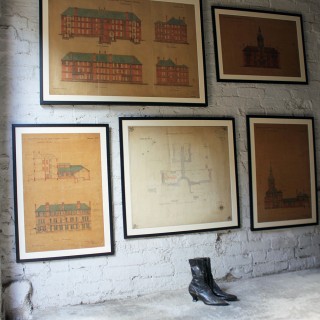 The decorative group of four large architects drawings and one site plan, of mixed sizes, each framed and glazed, comprising three drawings dated 1880 and one dated 1906, all by Giles, Gough and Trollope architects, with the site plan inscribed J C Cooke, Clerk of Works, May 6th 1889, each surviving from the late Victorian and Edwardian periods.

The five plans offered are as follows:

The Horton Road First Gloucestershire County Lunatic Asylum had a fund started for its creation in 1794. In 1812 the County and City of Gloucester and subscribers formed a union to provide an asylum. Designs were provided by William Stark in 1813 (the year he died), work was carried through by another architect and it was not completed until 1823. It held 120 patients, 24 opulent, 36 charity and 60 paupers and finally opened on the 17th July 1823, some thirty years after the project had commenced and even nine years after construction started. Sir George Paul had not lived to see his influence come to fruition having died in 1820.

The design for the Second Gloucestershire County Asylum was to be considered even more revolutionary, being the first to adopt an echelon layout, itself derived from the pavilion plan. Between 1879 and 1883 plans such as these offered here were submitted for the design of the asylum via a competition and the architects of John Giles and Gough were selected. Giles and Gough were already established institutional architects having produced works for the Poor Law Unions, Metropolitan Asylums Board (as Giles and Biven) and as designers of County Asylum had already produced an experimental Corridor-Pavilion layout for the East Kent Asylum at Chartham. John Giles was a British architect, active in the latter part of the 19th century. Giles worked with associate Albert Edward Gough (died 1908) from premises at 28 Craven Street, Charing Cross, London. They designed the extension wings to the Georgian workhouse in Cleveland Street, London in 1873 and Cavendish College, Cambridge (now part of Homerton College) in 1878. Giles and Gough also worked together on Hillfield House in Denmark Road, Gloucester as we see here and, in London, on Christ Church, Gipsy Hill and New End Hospital, Hampstead.

The male and female three storey ward blocks were to be arranged to either side of a central service and administrative area in pavilions linked to the main single storey corridor network by short spur corridors. Each block of the three blocks leading away from the centre was set back from the first, and otherwise fully detached from each other and set in their own airing courts. to the rear a further linear corridor crossed between male and female sides via the service area onto which two further ward blocks were sited. Each of the blocks was to be designated for a specific management class of inmate including, sick and infirm, acute and recent, working chronic and epileptics. Each block was constructed with red bricks, with the uppermost level decorated with blue brick diapering giving a Tudor appearance. The diapering extended to the clock tower and water tower, the latter also featuring lancet windows. Roofing on the original blocks was predominantly slate. Above the main entrance porch the legend “Anno domini 1883 “, “Bear ye one another’s burdens” was embossed onto a stone tablet and provided a prominent feature of the administrative block.

The second asylum was closed in 1994 with partial demolition in 1995 and sadly a large arson attack in 1999, which left remains in the form of a burnt shell. Since closure, little remains of Coney Hill Hospital. The lodges, staff housing, farm, ward blocks and the Twvyer Unit have all been demolished. The entrance gateway from Coney Hill Road is no longer recognisable as such and now forms part of the road junction providing access to the housing estate.

Rare, imposingly decorative and hugely interesting artefacts from a time when mental health was understood as an altogether a different proposition than how it is today.

The plates are in good overall order and are well presented and in tact with no significant losses. There is some expected light discolouration to the page edges in places but the diagrams and annotations remain in tact so this only serves in adding some more character. There are fold creases to each and the largest plate has losses to its edges. The frames are contemporary and effective.