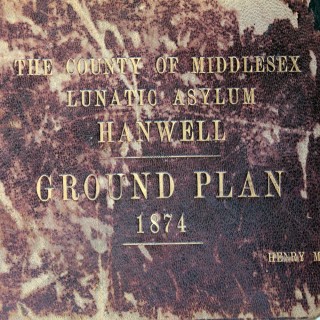 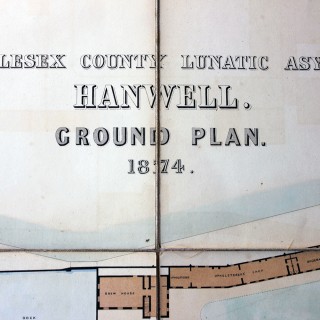 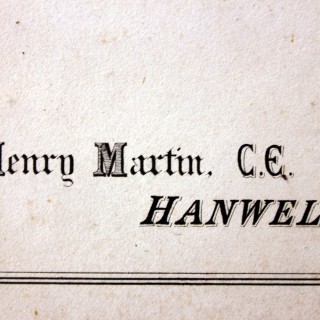 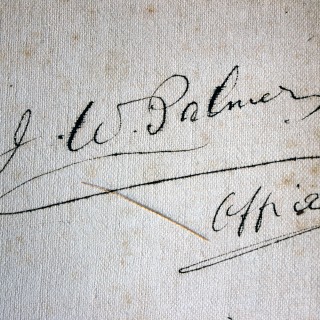 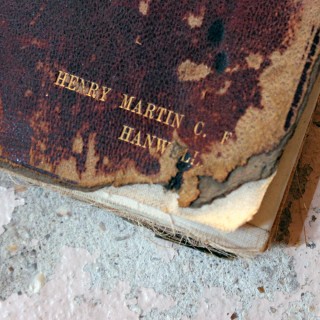 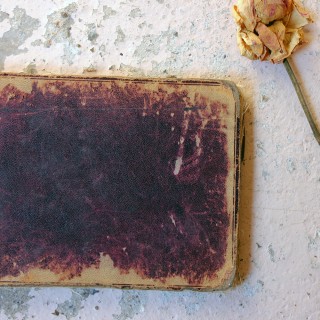 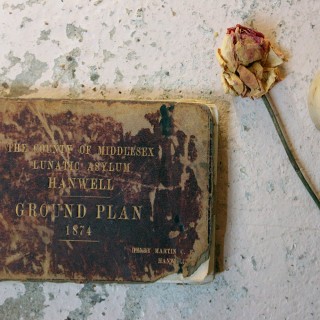 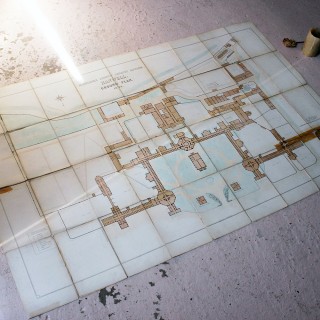 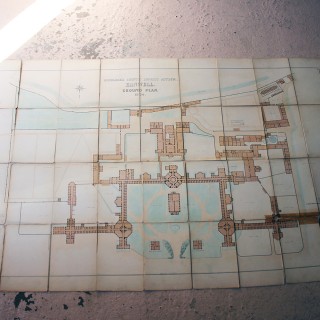 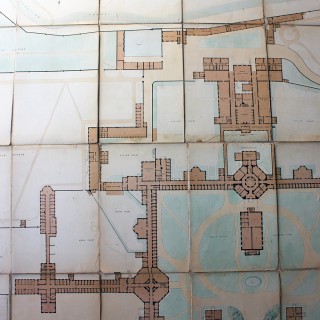 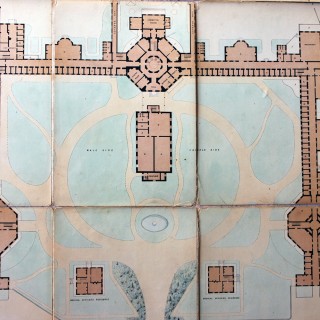 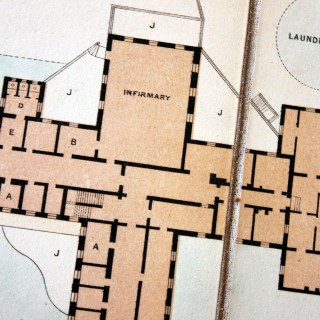 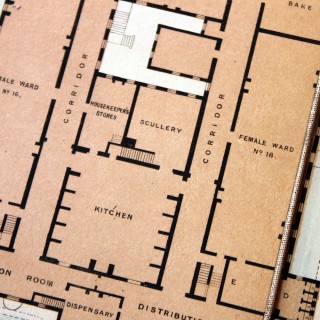 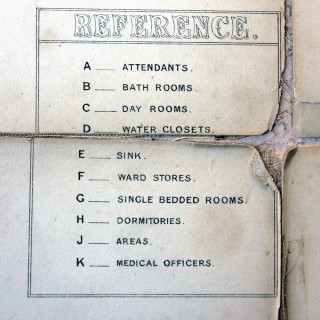 The large and scarce folding architects site plan, in 36 sections, opening from a tooled leather cover inscribed “The county of Middlesex Lunatic asylum Hanwell – Ground Plan 1874 – Henry Martin C.F. Hanwell”, in a colour wash and showing the plan of the ground floor with an array of wards, interesting rooms and wings, surviving from the mid-Victorian period and printed by Waterlow & Sons, Lithographers, London.

The construction of asylums was widespread in Britain following The Lunacy Act of 1845, which resulted primarily from the work of John Connolly and Lord Shaftsbury. This act professionalised the asylum and ensured that each institution was mediated by the local authority. It marked a paradigmatic shift, wherein ‘lunatics’ began to be considered as patients instead of prisoners.

Henry Martin was the asylums resident engineer who built the chapel on the site in 1870 and this plan shows rooms such as ‘Tinman, ‘Infirmary’, ‘Chaplain’ and “Seed House’ to name but a few. Independent of the wards of the asylum, there are the kitchen, sculleries, larder, dairy, washhouses, and laundries. The out-offices are, bakehouse, brewhouse, and general store-room. The clerks’ office is at the entrance of the asylum. There are separate workshops for the various trades, namely, upholsterers, printers, tailors, shoemakers, carpenters, tinmen, plumbers, and smiths. There is also a steam-engine for raising water into the building, and gas-works for lighting. To the reverse of one of the leaves is pencil signed “J W Palmer Office” – this is for a James William Palmer who was a clerk at the asylum.

The Hanwell Asylum, aka the Middlesex County Asylum, is probably better known as St Bernard’s with St Bernard’s Hospital, part of West London NHS Mental Health Trust still very much active today. It was the first purpose-built public asylum in England and Wales, and it opened as the First Middlesex County Asylum in 1831. When it opened it was built originally to take 500 patients, but the building was enlarged in 1831, 1837, 1857 and 1879 to cope with the increasing demand for beds. In 1888 the Asylum had 1891 patients. In 1889 the Asylum was taken over by the newly formed London County Council and became the London County Asylum, Hanwell. In 1918 it became a County Mental Hospital. In 1937 its name was changed to St Bernard’s Hospital.

A quote from Hanwell earlier in the Victorian period sheds light on the non-restraint tactics used;

“Among the indoor recreations for the patients during the winter days and evenings, music is the greatest favourite. There are three pianos; flutes, clarionets, and violins have been brought for patients who could play. Some of the attendants are tolerable musicians, and a small band has been formed, which contributes much to the enjoyment of the winter evening parties. It is by no means uncommon, on approaching the wards appropriated to the more troublesome patients, on the male side of the asylum, to hear a lively performance on the fiddle, and to find patients dancing to it.”

It goes on to say;

“They assembled in the number of about 250, in the gallery of No 9 ward, and in the adjoining tower, both of which were tastefully decorated with evergreens; coloured lamps were suspended from the ceiling, and the gas burners were altered so as to appear like ornamental fan-lights; and many devices and mottoes were placed on the walls. At about half past four o’clock these patients partook of coffee and cake in the above apartment, and all the others were similarly regaled in their respective wards; after which some danced, others sang, some played on various instruments, others amused themselves with cards, draughts, dominoes, bagatelle, etc. At eight o’clock a supper of roast beef and vegetables was served to them, with an allowance of beer and tobacco. At the conclusion of this repast they again engaged in amusements till about half-past nine, when, after singing the National Anthem, they retired to bed in tranquillity and order. Good humour and mirth prevailed during the entire evening, not a single circumstance occurring to mar the happiness which all appeared to enjoy. The attendants were most zealous and assiduous in contributing to the festivity of the patients; and their exertions were, in the highest degree, praiseworthy. All the officers of the asylum, and several of the Committee of Visitors, were present.”

A fascinating and important piece of social history and possibly the only surviving example of its type.

The plan is complete but is in well-worn and loved condition. There are splits to the folds with some sections detached, worn leather boards and a few tape stains. The plan could be framed though one would not be able to see the front tooled cover if this was done.