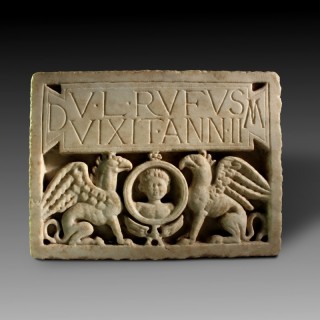 This is an impressive and rather moving commemorative plaque, rectangular in shape and made out of marble. It is dedicated to the memory of a young child, who died when he was only two years old.

In the centre of the stone we see the boy’s portrait, enclosed in a circular, medallion-like object. He is guarded by a griffin on either side. Above is an epitaph of two lines reading V L RVFVS VIXIT ANN II. To the left the letter D is written and to the right the letter M.

The first line contains the name of the boy depicted below: Vibius Lucius Rufus.

Early Roman names usually consisted of a praenomen (a first or personal name, given by the parents, identifying the individual) and a nomen (nomen gentilicium, indicating to which gens or clan a person belonged; a gens was a group of families who shared a common nomen; membership of a gens was hereditary). Later, from circa 100 B.C. onward names usually had three parts (tria nomina), adding a cognomen (a family name within a gens).

Praenomina often had a standard abbreviation, unique to that praenomen. In this case V is used for Vibius, a praenomen that has never been very common, although it does appear in a number of Roman families and gave rise to the patronymic gens Vibia. The meaning of the praenomen is unknown.

The second element is the nomen Lucius, indicated on this plaque by L. Lucius was one of the most common praenomina, giving rise to the patronymic gentes Lucia and Lucilia. However, there were also Romans who bore Lucius as a nomen, the most remarkable one being a writer who flourished in the reign of M. Aurelius; he was born in Africa on the borders of Numidia (see Good a.o., s.v. Lucius). As a nomen Lucius was common in Latium and Campania (Lomas, p. 191; p. 323). Rarely Lucius also occurred as a cognomen, being found only in Pompeii (see Lomas, p. 191).

The third element, the cognomen, could refer to a person’s appearance, job, place of birth or a distinguishing element of the first person bearing that cognomen. In this case we have Rufus, which means “Reddish” or “Ginger-haired”.

The second line in the text makes this object especially moving, because it tells us that the person to the memory of whom the plaque was dedicated was still a young child when he died. The text translates as “he lived two years”.

The letters D M on either side of the main text are an abbreviation, standing for “Di(i)s Manibus”. This expression, or its longer variant DMS (Di(i)s Manibus Sacrum) can be found on many Roman graves. It can be translated as “To the spirit-gods of the dead” and “Sacred to the spirit-gods of the dead”, or more loosely, “To the memory of”, followed by a personal name. Variants of the phrase also occur, such as “D M et perpetuae securitati”, “D M et in perpetuo securitatem” or “Dis Manibus et memoriae” (for an overview see Tantimonaco, p. 262).

The Manes were the spirits of the dead or more generally chthonic deities, associated with the Lares, Lemures and other deities that belonged to “the gods below” (di inferi). In this context it is interesting to quote the early church father Aurelius Augustinus, bishop of Hippo (Algeria, northern Africa, 354-430 C.E.). In his De civitate Dei contra paganos, book 9, chapter 11, he refers to the Platonist philosopher Apuleius (circa 124-170 C.E.) who said, in the words of Augustine (as translated by Marcus Dodds): “That the souls of men are demons, and that men become Lares if they are good, Lemures or Larvæ if they are bad, and Manes if it is uncertain whether they deserve well or ill.” The Romans often considered the Manes as dangerous and for that reason appeased them by offerings and rites; were these omitted, then the Manes could turn into dangerous Larvae or Lemures. It has been put forward that the word Manes probably has its origins in Latin manus or manis, “good” or “kindly,” and that the expression di manes was used euphemistically when speaking about the di inferi in order to avert any harm of fear that these may cause.

Griffins were considered guardians in classical antiquity. They were mythological creatures with the wings and head of a bird of prey, and the body and tail of a lion; their legs were sometimes shown as those of a lion, and sometimes the front feet had the talons of a bird. Pausanias (Description of Greece, I, 24, 5-6), speaking about the gold and ivory statue of Athena in the Parthenon, mentions that “on either side of the helmet are griffins in relief (…) The gold which the griffins guard (…) comes out of the earth (…) Griffins are beasts like lions, but with the beak and wings of an eagle.” The history of the creature goed back in time several millennia. They were depicted already around 3000 B.C. in Iran, soon afterwards in Egypt, and toward the end of the third millennium on Mesopotamian seals. The Greeks took over the idea of the griffin in the late eighth and seventh century B.C. (Harper a.o., p. 320). 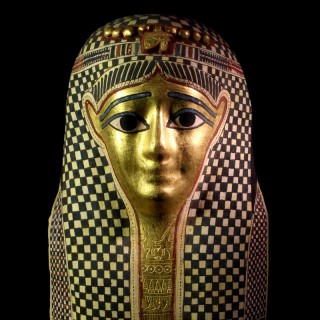