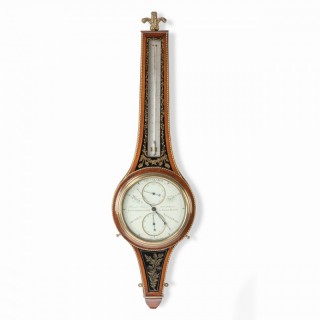 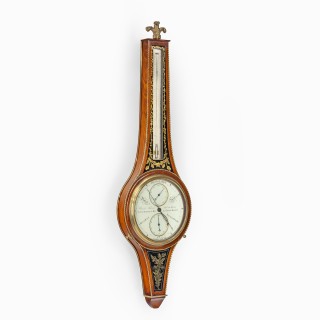 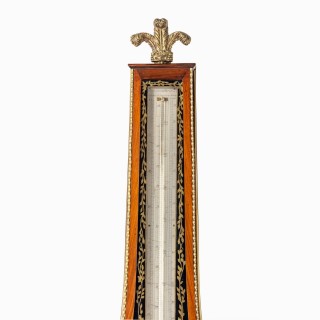 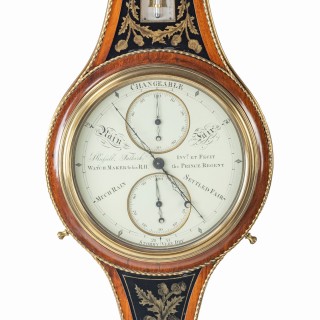 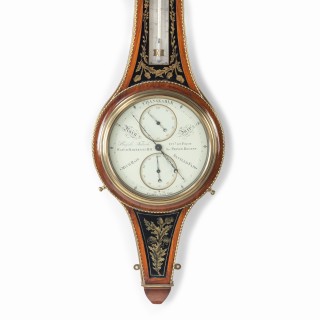 A ‘Royal’ barometer by John Russell, Watchmaker to the Prince Regent

This superbly crafted wheel barometer and thermometer has a mahogany case surrounded by twisted brass stringing and central panels of foliate tendrils above Russell’s signature thistle motif in black and gilt verre églomisé. It is surmounted by a brass Prince of Wales feather finial. The long, rectangular thermometer plate is inscribed ‘Thermometers: Beaumar, Fahrenheit, Royal Society of London’, the latter being an early attempt to standardise temperature measurement. The circular dial is inscribed ‘Changeable, Fair, Settled Fair, Much Rain’ and ‘Rain’ and signed across the centre ‘J Russell, Falkirk, Invt et Fecit, Watch Maker to his R.H the Prince Regent’. The reverse has a paper label ‘Russell, Iden Collection Inventory 1896’. Scottish, circa 1815.

These ‘royal barometers’ were so named because John Russell of Falkirk gave one each to George III and the Prince Regent (later George IV). A contemporary account in The Edinburgh Evening Courant of 6 July 1812 states ‘On Monday, Mr. Russell of Falkirk, waited on his Royal Highness at Carlton House, when he had the honour of delivering a superb gold chronometer of his making, according to H.R.H. gracious order. His Royal Highness, with his usual condescension, was pleased to declare his satisfaction with this specimen of Mr. Russell’s workmanship’ [sic]. There is an invoice from Russell in the Royal Archives for a chronometer and two barometers for £153 6s. John Russell (1745-1817) was one of the best Scottish clock and watchmakers of his time. He was appointed Watchmaker to the Prince of Wales in 1811 and is also famous for his wheel barometers. Other examples can be found in the Victoria and Albert Museum, London, and the National Museum of Scotland.

An interesting modern footnote is that Garrard, the Crown Jewellers at the time, commissioned O. Comitti & Son to reproduce this barometer, as a limited edition of 200, to commemorate the Royal marriage of Charles, Prince of Wales to Lady Diana Spencer in 1981.

A ‘Royal’ barometer by John Russell, Watchmaker to the Prince Regent