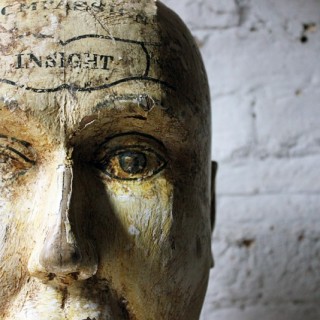 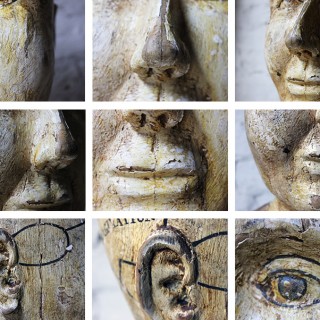 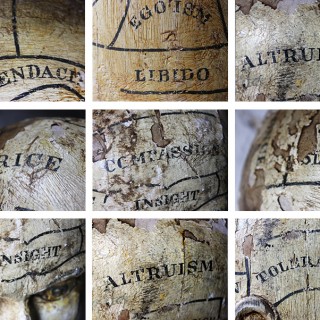 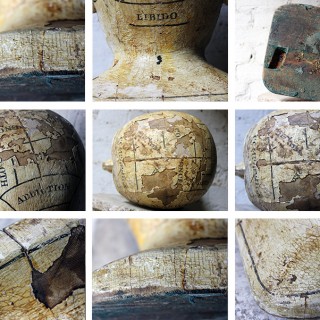 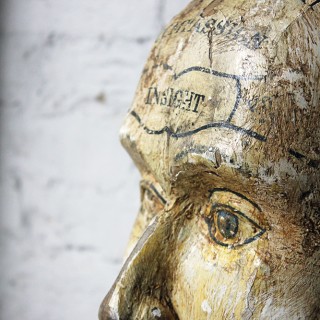 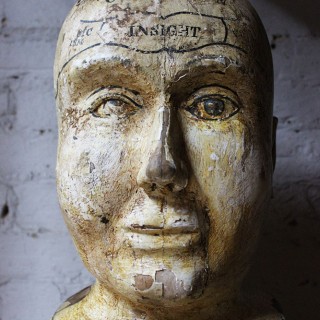 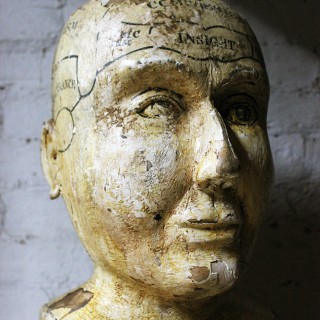 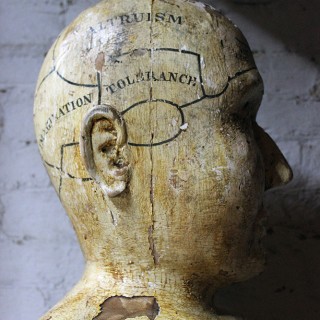 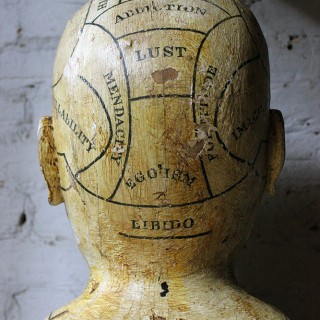 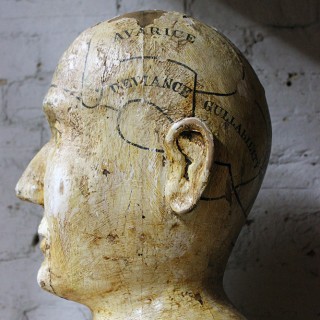 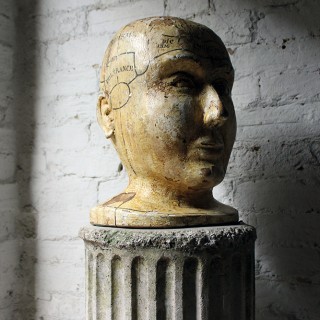 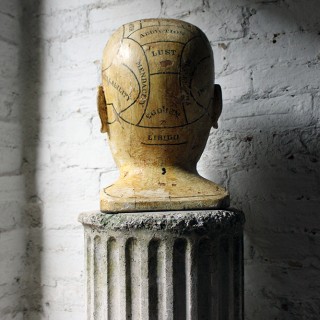 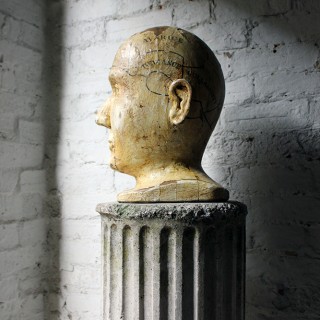 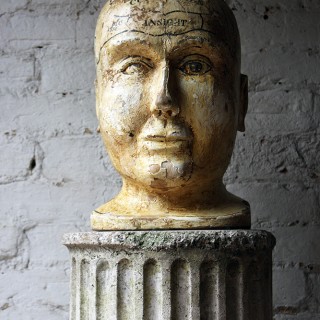 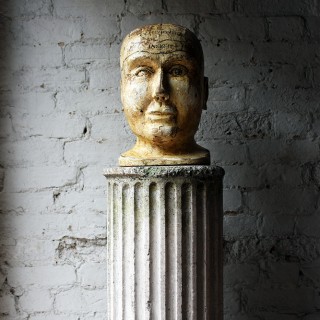 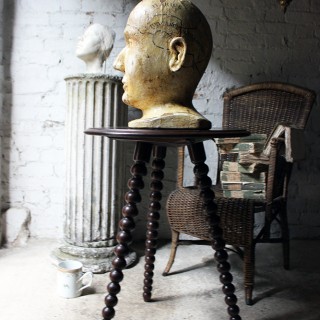 The folk art hand-painted and carved pine phrenologist bust of generous proportions, being disproportionate and larger than life in size, on a shaped base, mapping the labeled regions of the human brain, such as ‘lust’, ‘addiction’ and ‘gullibility’ with each section painted within black and cream outlines on an ochre base, the whole in unrestored condition with a superb craquelure and patination, and surviving from the middle of the nineteenth century, probably from America.

Derived from the theories of the idiosyncratic Viennese physician Franz Joseph Gall (1758-1828), phrenology was a faculty psychology, theory of brain and science of character reading, and what nineteenth century phrenologists called “the only true science of mind”. Gall made morality approachable and definitive by labeling regions of the human brain, as we see here, which would swell or deflate according to their prominence until adulthood when the cranial bone fused into indelible proof of ones abilities and shortcomings.

Based on his observations, from the late 1700s Gall claimed that the brain contained “inner senses” whose development determined the shape of the brain and ultimately, the shape of the skull. It became especially popular in England, where Gall’s supporter Thomas Forster named the new discipline “phrenology” – meaning ‘science of the soul’. In the early 1800s, all kinds of people, with little or no medical training, liked to engage in phrenology using (usually plaster) phrenological heads like this one as maps for reading skull shapes.

Early heads are plaster (more commonly) or pine, rarer, like this one, with ceramic models then becoming the norm and more popular in the late nineteenth to early twentieth centuries as they were less prone to damages and labels rubbing off. Phrenological heads cast in plaster or ceramic became commonplace adornments in American homes in particular; according to an article in the Boston Christian Examiner in 1834, “Heads of chalk, inscribed with mystic numbers, disfigured every mantelpiece.” Many phrenological busts found today invariably bear the label “L. N. Fowler”; being the famous touring Americans, these examples being late 19thC. The latter phrenology movement was largely responsible for the anthropometric (head reading) craze of the latter 19th century and its well-known anthropological and racial concerns.

This particular bust has a distinct folk art feel to it, provincially made, and it proves an early example which we feel is probably more likely American than English. The proportions are unusually large, probably for teaching aid purposes, and the style is primitive. Being in carved wood in the round it has a pleasing weight and presence.

Not only a hugely decorative interior element but one with rarity; and beautiful texture and patination that proves to be a timely reminder to the earlier chapters of human medical history.

The condition of the bust is fair to good with some surface chipping to the top surface in a few areas, please see the photographs for full visual reference. The extremities have some damage such as the nose. The piece is beautifully decorated and has not been interfered with in any way with many of the inscriptions are still clearly decipherable. There may at some stage been a makers label or inscription but we cannot see one present now. There is some remains of baize to the base.