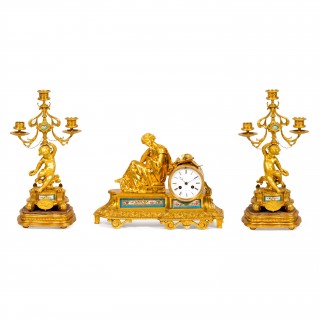 Comprising a central clock and a pair of flanking candelabra, the clock with a seated female figure representing exploration, with the circular dial to its right signed ‘Raingo Fres a Paris’, set on an ormolu base with florally decorated panels, the pair of three light flanking candelabra each centred by a putto and upon wooden plinths

Raingo was a French clockmaker and bronzier working since the late 18th Century. He apprenticed in Paris circa 1790 and moved to Belgium, circa 1800, probably for political reasons, and from the signatures on some of his clocks, it is known that he worked in Gand and Tournay. Later, in 1823, he is recorded as being clockmaker to the duc de Chartres. The company itself became Raingo Frères in 1825 and thereafter clocks bear their signature with various Paris addresses. The four Raingo brothers were first recognized as clockmakers, but in 1841, they added art bronzes and furnishings to their repertoire. The firm exhibited at many of the important exhibitions of the second half of the 19th century and was known for the fine quality of its ormolu. In 1860, the Raingo house furnished bronzes to the Emperor and Empress, and owned an important store of exhibition pieces as well. Among the artists whose work was cast by Raingo Frères are Pradier, Carrier-Belleuse, and Auguste Moreau.