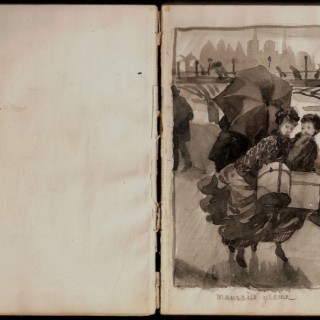 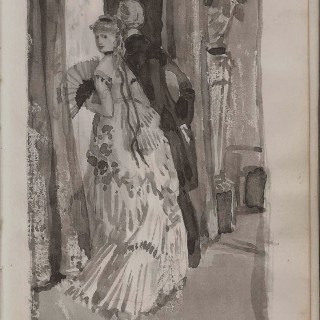 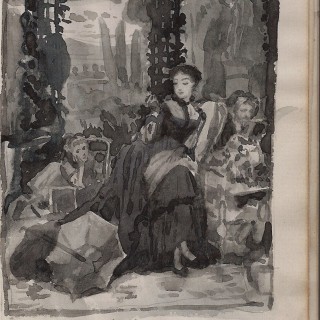 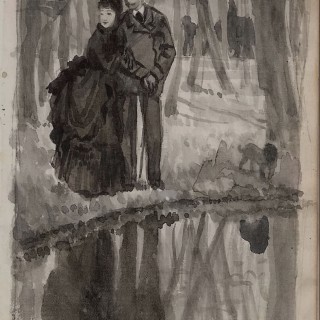 Tissot is famous for his exquisite paintings of beautiful English women and most people think he was English. In fact Jacques-Joseph Tissot was born in Nantes, then a thriving port on the Loire estuary in western France. He adopted the name James as an anglicised form when living in England.
His friends were Manet and Degas, with whom he shared a teacher in the painting school in Paris. Not a lot is known of his personal life except that around 1876 a mysterious attractive lady begins to appear in his pictures. Her identity remained a mystery until well into this century. Her name was Kathleen Newton, née Kelly.
In 1876 Kathleen Newton and her two children moved into Tissot’s house and remained there until her death from consumption in 1882. She was only 28. For Tissot, the time spent with Kathleen was the happiest period in his life, and one, which he was to look back on longingly for the rest of his days.

Finding the thought of life in London intolerable without her, he decided to leave at once. Within only five
days of her death he abandoned the house, leaving his paints, brushes and some unfinished canvases behind him, and returned to Paris. Later he sold the house to his friend Alma-Tadema.
He carried on painting the fashionable society for three years after arriving in Paris, but from 1885 until his death in 1902 became very religious and spent the last 17 years living as a recluse, painting religious pictures.
During his eleven years in London Tissot enjoyed great artistic and financial success and produced most of his finest work. Unlike some of the artists whose talents are only appreciated after their death, Tissot’s pictures were loved and bought by his contemporaries and sold for very high prices.
Despite his success in England, however, the French persisted in regarding him as a minor artist and dismissed his work as being “too English”! And curiously, he is one of the few painters who has not “gone out of fashion”. He appeals to us today as much as he did to the people who saw his pictures at his first exhibitions.

He painted beautiful society ladies taking tea in conservatories, having picnics by ornamental pools, taking trips on boats and going to balls and concerts.
Kathleen Newton was a model for many of his paintings. We can see he adored her totally and loved to
paint not just her pretty face, but also to dwell on her dresses, pleats, ribbons, bows and hats. He had not only a great artistic talent, but also an eye for style and a feeling for chic.