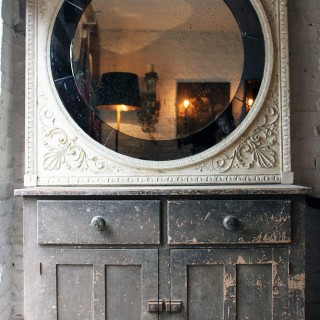 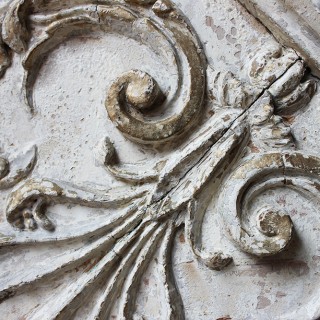 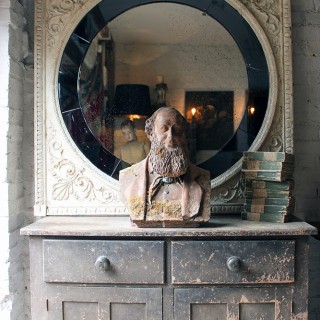 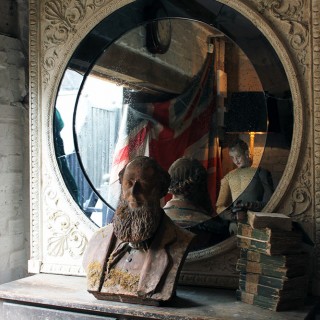 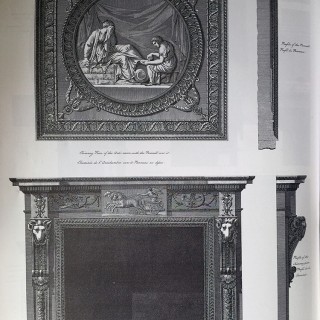 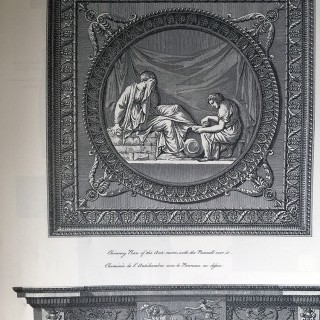 The large square chimneypiece panel now as an overmantle mirror, the surround dry-scraped back to the original ivory paintwork with traces of gilding to the Robert Adams spandrels, the border of egg and dart design, the centre panel once occupied by artwork, now housing an early twentieth century circular mirror with segmented smoked glass border, the frame surviving from an important Georgian country estate.

The plate glass has some foxing but just the right amount to serve for character with a good spread of sparkle. The outer smoked glass segments are mainly in good condition and are all original though two have hairline cracks through them. There is some small losses to parts of the panel but nothing of real note. The piece came to us with several layers of thick later paint which we have painstakingly removed over several hours to reveal the original paintwork and traces of gilding underneath. She has four mounting brackets for fixing to a wall though would benefit from support underneath at the same time.

A very similar panel can be seen pictured in “The Works in Architecture of Robert and James Adam” (Dover Books on Architecture) and Plate 70, in the designs for Sion House which was the seat of the Duke of Northumberland in the county of Middlesex which shows the ‘chimney piece of the anti-room with the panel over it’ – (see photographed scan). This chimneypiece is comparable in design showing the similar spandrels, the same proportions but with the art work in the centre as opposed to the mirror plate.

The Palladian style dominated British architecture for most of the 1700s, until the rise of the Adam style, which held sway for the final decades of the eighteenth century. Brothers Robert and James Adam were almost single-handedly responsible for infusing Georgian architecture with the sensibilities and elements of classical Hellenic and Latinate design. Their elegant, sophisticated form of Neoclassicism affected architecture, but also interior design, furniture design, and landscaping.

This panel would have been made for and placed in a resplendent country house estate, as intended over the accompanying fireplace, and would have been incredibly expensive at the time. It is pleasing that the panel has in part been saved and can be enjoyed today as a stunning centerpiece.

A sublime and unique statement piece of rare form and of important historic merit.