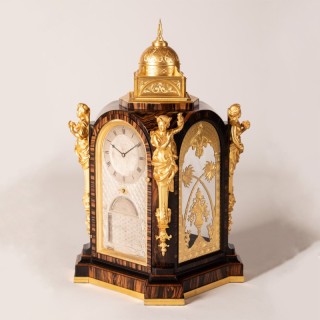 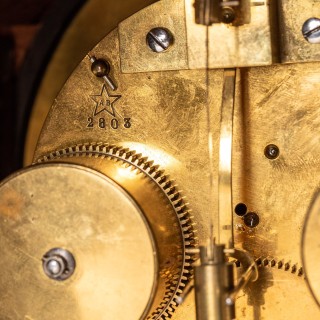 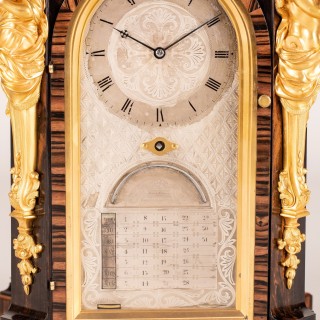 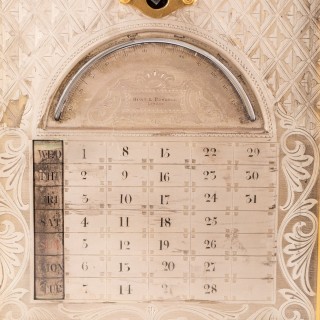 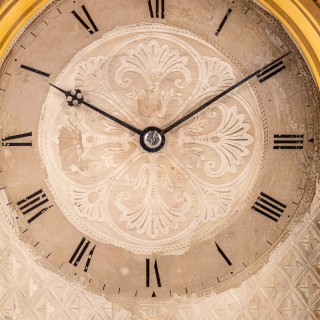 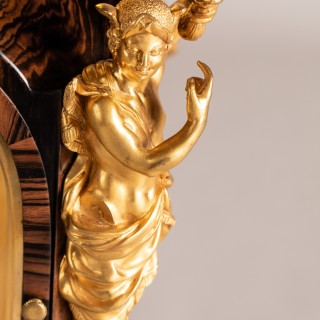 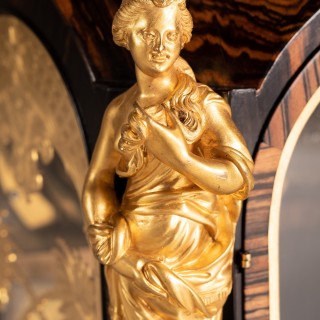 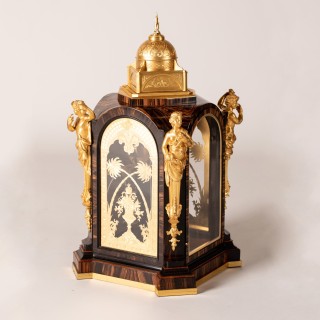 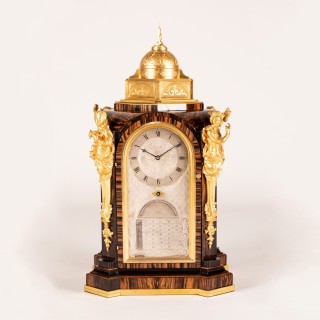 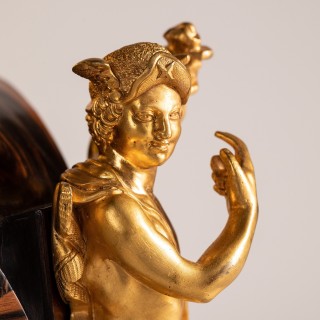 The case constructed of very well-figured Coromandel giving the maximum amount of decorative effect, with gilt bronze accents; the plinth base of rectangular form, with everted stepped corners, and precisely chased gilt bronze figures, two representing Mercury-the god of travel and merchants  with his winged helmet and coin purse in hand; the others representing Fortuna-the goddess of luck; the sides glazed, with mooresque arcaded pierced mounts enclosing a vase, in gilt bronze with overlapping palm trees above: the top of domed form with an octagonal platform, surmounted by an architectural dome, its engraved detail and structure reminiscent of Byzantine prototypes. The silvered chapter ring with Roman numerals for the hours, and within an arabesque dial divided into quadrants, with the key aperture at 6 o’clock. Below, the manual calendar, and a semi-circular thermometer. The dial signed by the retailer “Hunt & Roskell / London.” The mechanism replaced with a one-year duration movement by Achille Brocot.
English, circa 1860

A closely related clock, by Thomas Cole, though not bearing his signature, with a case of identical form and differing bronze decoration, previously with Butchoff. A third known coromandel-veneered example, also unsigned, is discussed by John Hawkins in his authoritative book on the maker. It is equally featured on the cover.

Son of Thomas Cole Snr, a Somerset clockmaker, Cole is known as a specialist in making decorative timepieces of the highest quality. He exhibited at the Great Exhibition at the Crystal Palace in 1851; he warranted an ‘honourable mention’ in the Paris Exposition universelle of 1855 and the London 1862 International Exhibition, where he was awarded a medal for ‘excellence of taste and design’. He was elected to the Royal Society of Arts, and the British Horological Institute. He executed commissions for the leading London retailers, including The Goldsmiths Alliance, Garrards, Asprey, and Hunt & Roskell.

The trademark on the movement is that of the firm founded by Achille Brocot whose innovations include the anchor escapement, the adjustable pendulum suspension and perpetual calendar that all bear his name. While a replacement mechanism, this movement, a very advanced five-barrel mechanism, enables the clock to run for a full year. Brocot and Cole were contemporaries, and following his participation at the 1844 Paris exhibition, he was invited to London where he established important commercial relations from 1845 onwards. He is listed as a London maker in the compiled dictionary authored by Brian Loomes.