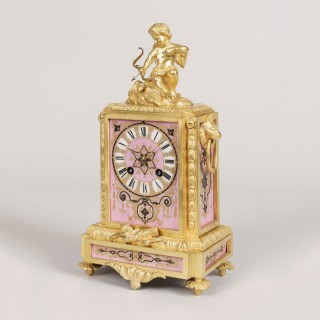 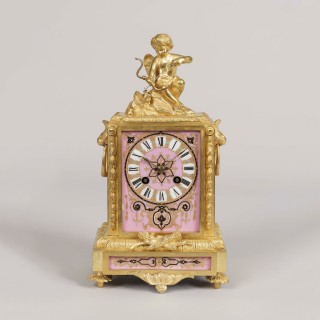 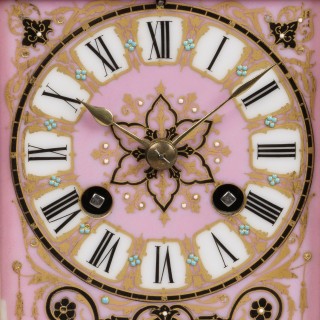 The finely chased ormolu case encompassing pink porcelain panels decorated with beads to the face and sides; the whole surmounted by the figure of cupid and his bow. The decorated dial having the hours marked with Roman numerals atop the emblematic quiver, bow, and torch. The 8-day movement striking the hours and half hours on a bell. The two-train movement signed “Japy Fréres et Cie” and the retailer “Jos Penlington Liverpool.”
French, Circa 1890

Frederic Japy (1749-1812) was apprenticed in Montbeliard to his clockmaker uncle, and returned to his home town of Beaucort, setting up as a clockmaker, and an organiser of local clockmakers into a company – the company expanded and were medal winners at many of the International Exhibitions throughout the 19th century under the aegis of his sons, eventually closing after the First World War.

Joseph Penlington is recorded as working from Church Street, Liverpool between 1818 and 1834 and from St. Georges Crescent North 1848-1903.