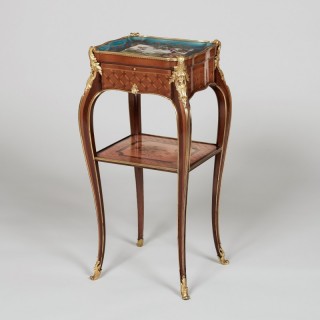 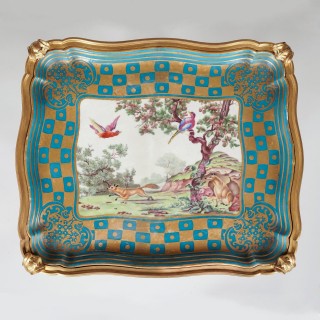 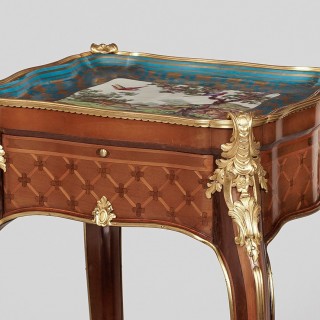 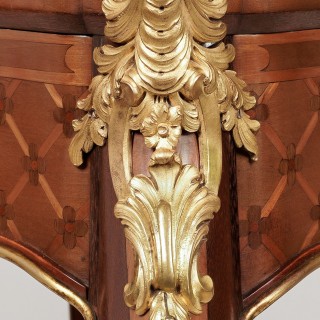 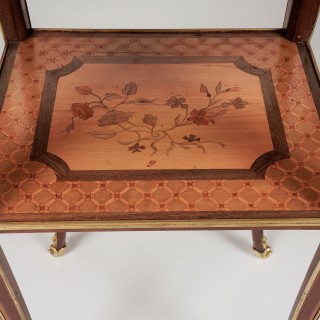 Constructed from bois satiné, partridge wood and various specimen woods including stained sycamore and tulipwood throughout, rising from cabriole legs dressed with gilt bronze sabots and espagnolettes, joined with an undertier inlaid with floral marquetry, the porcelain ‘Sèvres’ top tray mounted within a serpentine brass border with a trellis marquetry frieze below.
French, circa 1860

This table is an example of the small pieces of furniture that proliferated in the middle of the eighteenth century in France to make the domestic interior more comfortable. Known as a chiffonnière, it was suitable for moving around a room and could be used for placing things on, such as a cup and saucer or some needlework. Boucher’s portrait of Madame de Pompadour in the Alte Pinakothek in Munich shows her sitting at a similar table, albeit without a porcelain top, using it as a book-rest, candle stand and writing table. Tables like this are very characteristic of the work of Roger Vandercruse (1728-1799).