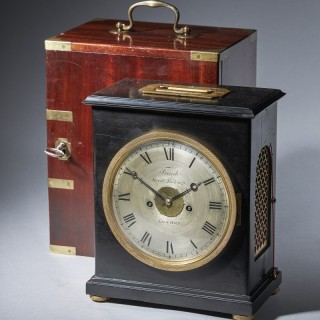 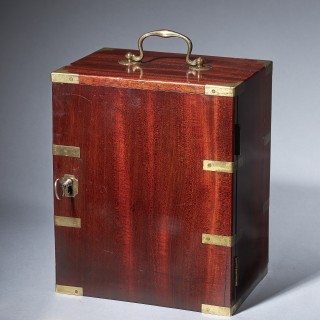 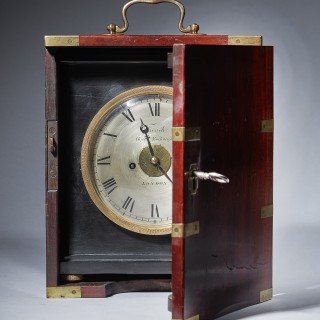 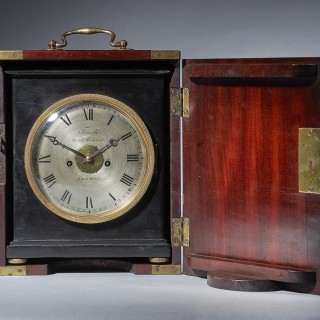 A unique early ninetieth century travelling clock signed on both the silvered dial and the backplate French Royal Exchange LONDON.

The small ebonised rectangular case has a circular silvered dial to the front, protected by a convex glass set in an engine-turned gilt brass bezel. There are red silk-back arched gilt brass sound frets to the sides, while the backdoor has an elaborately pierced similarly backed gilt brass panel. The case is surmounted by a countersunk gilt brass carrying handle and the clock rests on four gilt brass engine-turned feet.
The fine circular silvered brass dial has a Roman chapter-ring, surrounded by a minute track with five-minute divisions. There is an Arabic brass alarm disc in the middle, behind a fine pair of blued steel hands. At the top is a strike/silent lever S/N.
The eight-day twin fusee plated brass movement consists of going and striking trains, as well as an alarm. The going train has a most unusual construction. The centre arbor protrudes through the backplate and engages with an extremely fine gilt brass watch-like sub-movement mounted with two screws and positioning pins on the backplate. It has lever escapement with a fine jewelled hairspring balance and regulation on a silver graduated segment. The striking is regulated by a rack and snail system and sounds the hours on a bell. In addition, the movement has pull quarter repeat on two bells differing in pitch. Finally, the clock has an alarm activated by pulling a cord, the alarm time is indicated by the tail of the hour hand on the alarm disc.

The whole can be put in a fine brass-bound mahogany travelling case, the bottom having a semi-circular cut-out to facilitate removing the clock from the case. It is surmounted by a shaped brass carrying handle.

Note: Given the quality of the clock, particularly of the travelling case, the clock could have been for campaigns as an officer’s clock.

The maker, French, was a clock and watchmaker at Royal Exchange. Loomes gives the dates 1810-1911.