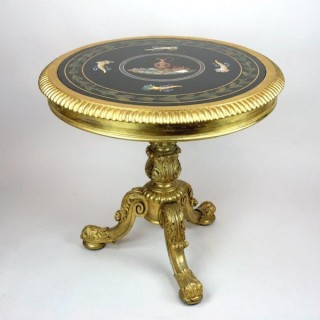 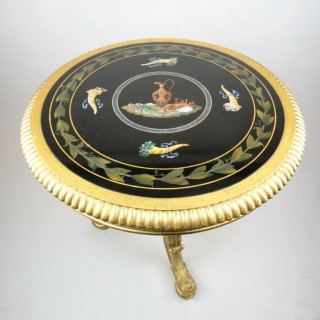 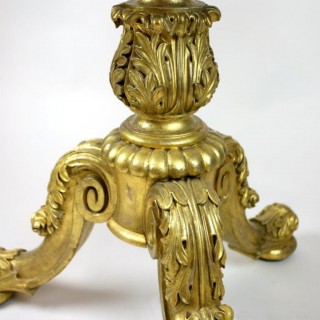 The central turned baluster supported on tripod feet, carved in high relief with acanthus leaves and deep scrolls, the solid gilt frieze with a gadrooned edge enclosing a black ground marble top with a central Grecian vase, a string of pearls, shells, a branch of coral and some flowers all within a band of lapis lazuli, surrounded by a further of four cornucopia and an additional laurel border, the marbles including malachite and other semi-precious agates. lapis lazuli.

The form of this table with its carved cabochons on the foot and gadrooned edge is typical of the designs of Gillows of Lancaster. For comparison see Susan E Stewart, Gillows of Lancaster of London 1730-1840, 2008, 2 vols, vol 1 pg 268. For further comparisons with the top, see Anna Maria Massinelli, the Gilbert Collection, hard stones, 2000 pg 109-110.

The cabinet-making firm of Gillows was founded in 1728 by Robert Gillow (1704-1772), who was not only a joiner and cabinet maker but a jack of all trades; architect; house-carpenter and contractor; funeral director; and West Indies merchant. He laid the foundations of a successful firm which retained the Gillows family name for over two hundred and fifty years, and became one of the leading English furniture making firms, and the only firm of its kind to span two centuries and retain branches both in the provinces and the capital city. The firm is however unique in two other respects: firstly, though incomplete, a high proportion of the Gillow Archives have survived including estimate sketch books, letter books, and other business ledgers dating from circa 1730-1930. Secondly, some of their out-put was stamped ‘GILLOWS LANCASTER’ a practice which began about 1790 and enables some of their products to be identified. A few were also signed (and sometimes dated) by the journeyman cabinet maker who made the piece, and occasionally it is even possible to trace the name of the original owner. This of course adds interest and value to a piece of furniture.

In 1757 Robert Gillow’s eldest son Richard Gillow (1734-1811) joined his father as an equal partner in the firm of ‘Robert Gillow and son’. He set to further developed the firm, he made new furniture based on London designs, took on apprentices and supervised their training, and ensured that they used only the best timber and other materials despite their cost. 1769 was an important year for the firm. Robert Gillow retired from business leaving his share to his second son Robert Gillow (1747-1795) who joined his elder brother in partnership as ‘‘Richard and Robert Gillow’’ the same year their cousin Thomas Gillow, founded the Oxford Street shop which became known as ‘‘Gillows & Taylor’’ and although the London partners were upholsterers and furniture makers from the onset, they also purchased furniture made in Lancaster because it was cheaper to employ journeymen outside London.

The Gillow brothers also expanded their overseas trade during the second half of the eighteenth century. Shortly after the death of William Taylor (d. 1775) in January 1776 Robert Gillow (1747-1775) went to London to run the Oxford Street shop. During the last two decades of the 18th century Richard Gillow’s three sons George, Robert and Richard, and his brother Robert Gillow of London’s son also called Robert, all became partners and between them they ran both the London and Lancaster shops. Gillows as upholsterers provided the sort of services offered by an interior decorator today, they supplied and fitted carpets, made up and fitted curtains, supplied wallpapers and men to hang it, in addition to making all sorts of furniture. However, the sudden and unexpected death of two partners at the end of the eighteenth century plus Richard Gillow’s retirement; and a failure in the West Indies trade which led to bankruptcy amongst Lancaster merchants meant that the Lancaster branch fell on hard times at the turn of the century. These factors plus the third generations ‘upward mobility’ in society may well have resulted in the Gillow family’s decision to withdraw gradually from trade. In 1813 the new partners were Redmayne, Whitesides, and Ferguson who gradually bought out the three Gillow brothers George, Robert and Richard, in several instalments lasting over many years.