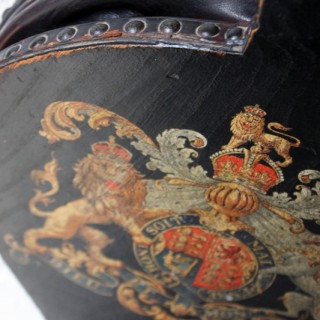 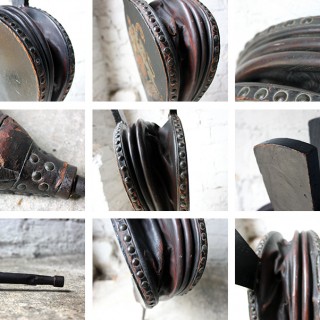 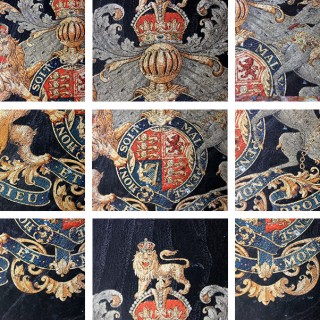 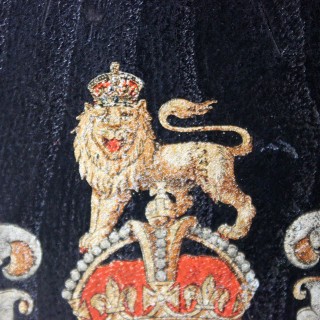 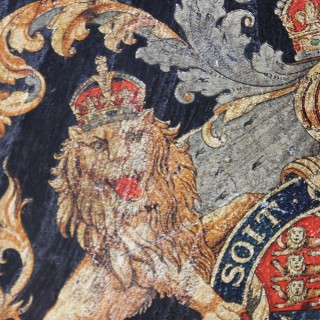 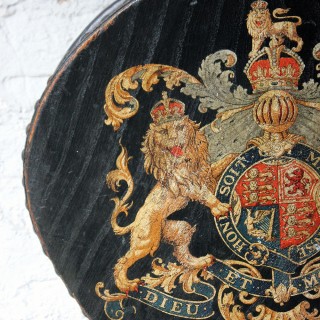 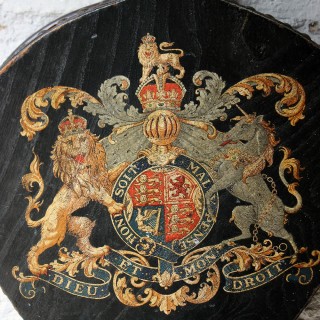 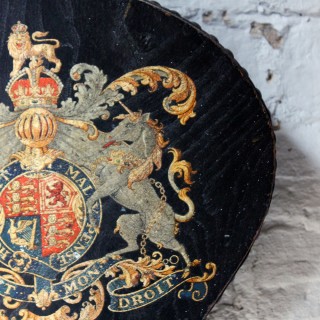 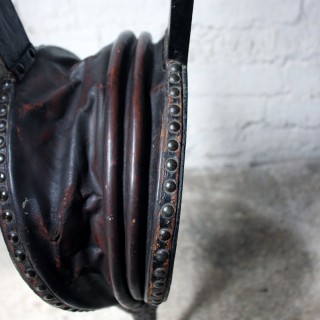 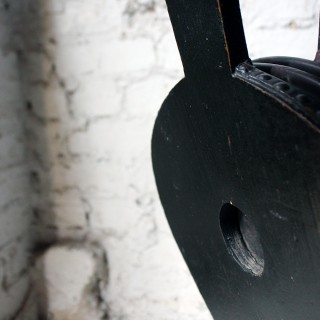 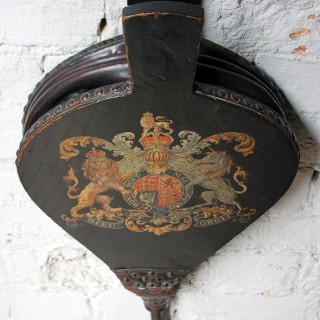 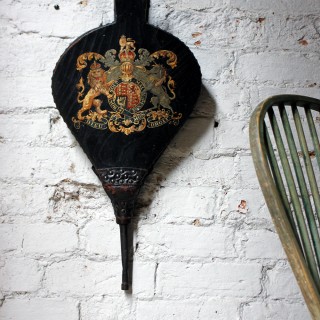 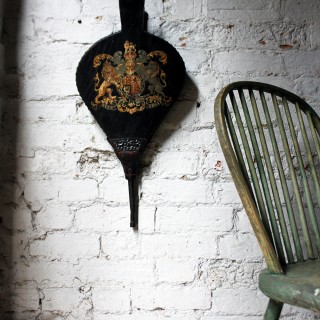 The Victorian period hand-painted and studded leather bound wooden pair of bellows of typical form with iron nozzle, the main body beautifully decorated with a polychrome Royal Coat of Arms Cypher on a black ground, now acting as a decorative piece of wall art and surviving from the fourth quarter of nineteenth century England.

The Royal coat of arms of the United Kingdom, or the Royal Arms for short, is the official coat of arms of the British monarch, currently Queen Elizabeth II.
The Royal Arms we see today have evolved over nine centuries, since Richard 1st (the Lionheart) chose a shield of three lions to represent the three areas England, Normandy and Aquitaine – which were associated with the English crown.

The shield is quartered, depicting in the first and fourth quarters the three passant guardant lions of England; in the second, the rampant lion and double tressure flory-counterflory of Scotland; and in the third, a harp for Ireland. The crest is a statant guardant lion wearing the St Edward’s Crown, himself on another representation of that crown. The dexter supporter is a likewise crowned English lion; the sinister, a Scottish unicorn. According to legend a free unicorn was considered a very dangerous beast; therefore the heraldic unicorn is chained, as were both supporting unicorns in the Royal coat of arms of Scotland. In the greenery below, a thistle, Tudor Rose and shamrock are present, representing Scotland, England and Ireland respectively. The coat features both the motto of English monarchs, Dieu et mon droit (God and my right), and the motto of the Order of the Garter, Honi soit qui mal y pense (shame upon him who thinks evil of it) on a representation of the Garter behind the shield. The final significant change occurred when Victoria became Queen in 1837. As a woman she could not succeed to the throne of Hanover, so the shield of pretence was omitted from her Arms. Apart from changes in the initials of the Sovereign, the Royal Arms have remained the same ever since.

The Royal arms were created in various mediums including, textile, wood, stone, plaster, cast iron, paint and glass, and unusually as we see here, leather. The earlier Arms were often painted on wooden panels, but by the eighteenth century they were more likely to be on canvas. They were often painted by local sign writers and very crude. However, Arms could also be of very fine and high-end craftsmanship, particularly when they were specifically designed as part of new architectural schemes. This particular example is well painted especially considering the object they are painted upon, We have seen one or two other examples of bellows being painted in this way, and also leather fire buckets.

A more decorative pair of bellows, you will not find.

The bellows do operate, however, whether or not at peak efficiency is unknown as we are unsure of any leaks. The leather is worn and cracked, split and missing in places and with various scratches, scuffs, marks, and chips. The handle at the back is now detached and missing whilst the nozzle is present but bent, dented and rusted. There are some holes to the body of the bellows. Overall the piece is wonderfully original and there hasn’t been any restoration or meddling with so to speak and she serves as a very decorative piece of artwork, though could be restored and be used as intended if so desired. We have oiled the leather and waxed the wood.