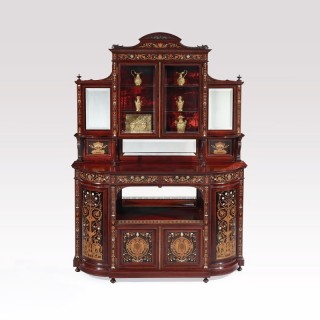 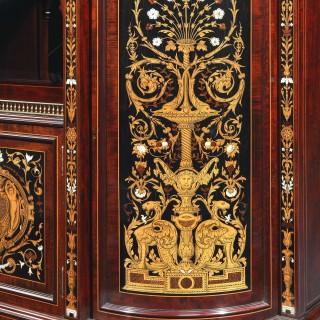 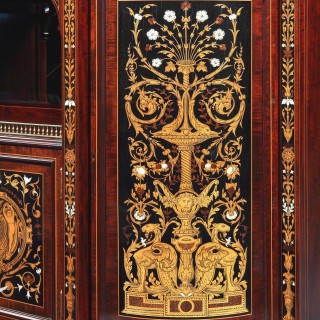 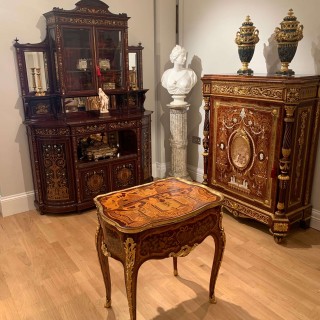 A Very Fine Display Cabinet by Hampton & Sons of London

Constructed in a beautifully figured ‘Plum Pudding’ Cuban mahogany, adorned with complex and etched inlay work in the Renaissance Revival manner, utilising ivory, satinwood and bois de rose.Rising from toupie feet, the cabinet is of arc-en-arbalette form, the central panelled lockable doors housing cartouches dressed with putti, and the flanking bow ends decorated with a stylised ‘Tree of Life’ pattern; a bevelled mirror back aperture has a running brass arcaded gallery; the two mahogany lined drawers, constructed with quadrant mouldings, are dressed with highly decorative swan neck handles. The upper section, supported on fluted columns, having two glazed display windows with a vertical brass guard trim, flanked by bevelled mirrors, supported by carved spandrels, housed with a framework of complex conforming inlays, and capped with turned finials, and the whole is surmounted by a domed pediment with addorsed stylised dolphins. One drawer stamped ‘Hampton & Sons L777’Circa 1885

Their commissions included, inter alia, the furnishing of the Royal Yacht Britannia, the liners Queen Mary and Queen Elizabeth, the Theatre Royal in Drury lane, and the palaces of the Nizam of Hyderabad and the Maharajah of Kashmir. An incendiary bomb destroyed the building in 1940, after which they moved to Kensington High Street, where they traded until 1960.

A Very Fine Display Cabinet by Hampton & Sons of London