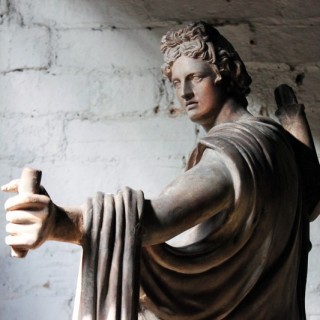 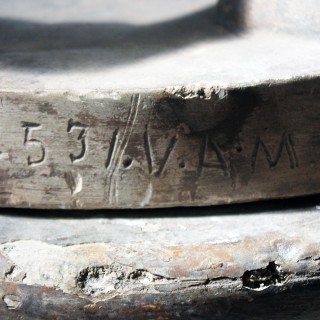 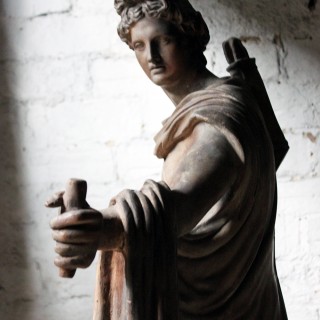 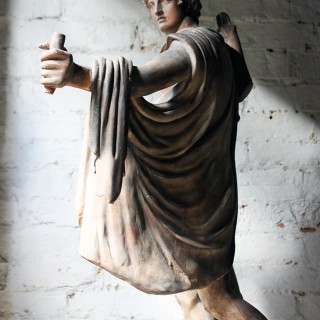 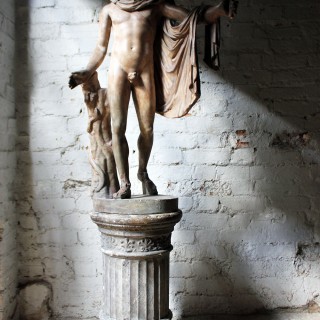 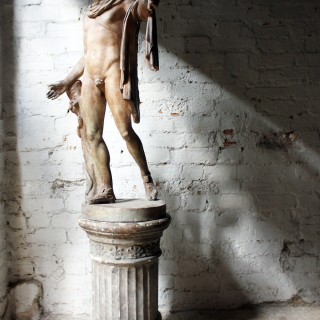 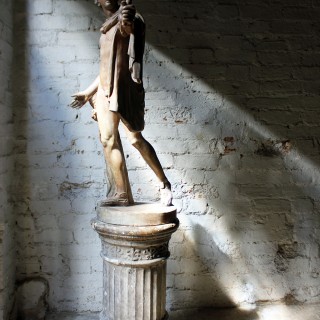 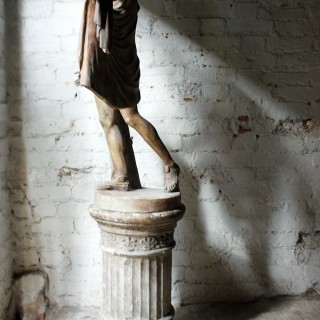 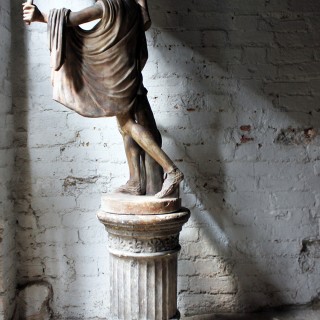 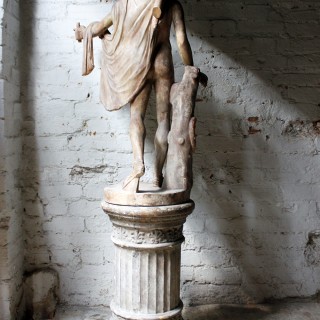 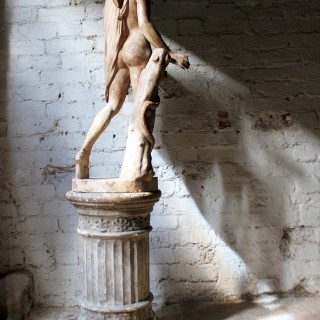 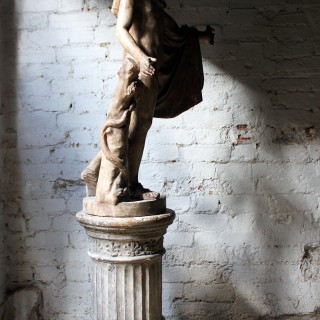 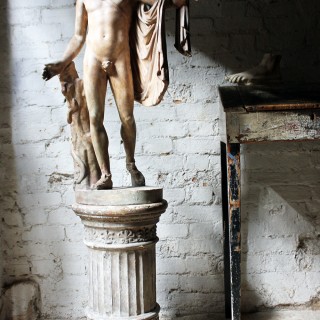 The very finely cast plaster study of the Apollo Belvedere, after the antique, cast in half-size by D. Brucciani & Co under the auspices of the Victorian and Albert Museum, London, the whole mounted on a circular fluted plaster plinth with floral decoration, and surviving from 1930s England.

In our research of this beautiful cast we spoke to the Victoria & Albert Museum’s sculpture department and they have confirmed that the 1939 Brucciani catalogue lists the Apollo Belvedere with this index number of ‘2531’. It also confirms that casts, life-size at a height of 7 feet 9 inches, were sold for £24 in 1939, but then the price (handwritten in the catalogue) increased to £50 8s. Smaller versions at 3 feet high could be bought for 4 guineas, which then increased to £8 16s. 6d (again handwritten in the catalogue); which amounts to approximately £600 in today’s currency.

We do not believe that this particular plaster cast was ever a V&A object per se, but was rather sold when Domenico Brucciani operated under the auspices of the V&A. This still makes the piece highly desirable and very few have seemingly survived. We believe this cast was first taken in 1851, and had been admired at the 1851 Great Exhibition: see Ian Jenkins, ‘Acquisition and Supply of Casts of the Parthenon Sculptures by the British Museum, 1835-1939’, Annual of the British School at Athens, 85 (1990), pp. 89-114; see also Droth, ‘Minton & Co. […] Greek Slave, 1848’, Sculpture Victorious, p. 414.

Domenico Brucciani (1814-80) was the son of Vincenzo Brucciani, and christened Domenico Antonio Brucciani. Born in Lucca in 1814, he set up business in London, establishing a Gallery of Casts in Covent Garden by 1837. In the 1851 census, his age was recorded as 33 and his occupation as ‘Professor of Modelling in Clay’. Brucciani worked as a modeller for the South Kensington Museum (now the Victoria and Albert Museum) and the British Museum, taking casts of items in their collections and supplying other casts. He described himself as ‘Formatore [i.e., maker] & Modeller to the Science and Art Department’, as well as to the British Museum and the Royal Academy of Arts, on his handsome blue invoice paper. His most illustrious commission for the South Kensington Museum was the casting of the Pórtico de la Gloria, the 12th-century façade of the cathedral at Santiago de Compostela, which he did in 1866. Brucciani died at the age of 65 in 1880, leaving a personal estate of under £4000.

By the time of the First World War, as the demand for plaster casts declined, the company found itself in difficulties, as was reported in 1916 (The Times 26 December 1916). In response to the threat that their unique collection of plaster moulds and casts might be dispersed, a petition led by Sir Edward Poynter PRA, that the Government should purchase the collection, was addressed to the Prime Minister but without success. The ship owner, Sir William Petersen, then supplied the means for the company to carry on during the war. The business went into liquidation in 1921 (London Gazette 15 July 1921).

The company was taken over by the Board of Education and run by Paul Ryan for the Victoria and Albert Museum as a service, renamed the Department for the Sale of Casts, until financial losses forced its closure in 1951. The moulds were transferred to the British Museum in 1955 (Clifford 1992 p.49). The Department for the Sale of Casts, ‘in succession to D. Brucciani & Co’, produced illustrated trade catalogues of reproductions, the earliest apparently dating to October 1922, with 29 pages and 27 plates of illustrations.

The Apollo Belvedere, at 7.3 feet high, is a Roman copy of a lost bronze original dated c. 350-325 BC by the Greek sculptor Leochares. The figure represents the Greek god Apollo after his defeat of the serpent Python using a bow and arrow. The figure’s taut muscles indicate that he has just released the arrow.

This sculpture has inspired artists’ anatomical learning since its rediscovery in the 15th century. The figure’s contrapposto pose, a standing position whereby the figure has most of its weight on one foot so that its shoulders and arms twist off axis from the hips and legs, has been endlessly copied ever since by artists interested in giving their figures greater animation. Albrecht Dürer used the pose in his 1504 engraving of Adam and Eve. Michelangelo is said to have been so impressed with the torso that he based some of the characters in the Sistine Chapel on it.

A rare survivor and a sublime cast and work by an instantly recognisable artist under the guises of one of the worlds greatest museums.

The figure is in mainly good overall order with expected wear and small losses due to the medium used. There is an old repaired crack to the plinth with chips, cracks and patch repairs. There are scuffs and abrasions to the whole making it very decorative. Apollo’s head shows some small chips and losses, as does his drapery and folds. There is seemingly a terracotta wash over the figure, and a repair to one of the hands and fingers. The base has numerous small chips and is dirty as does the plinth. There is an inscription to the base reading ‘2531 V.A.M’.