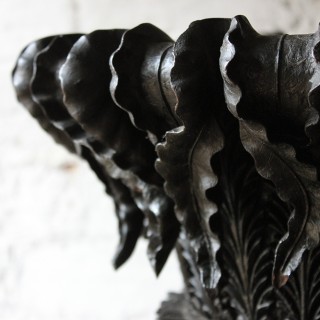 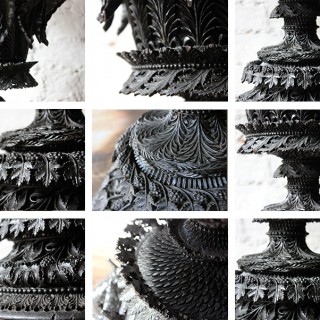 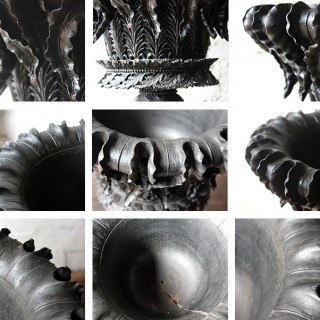 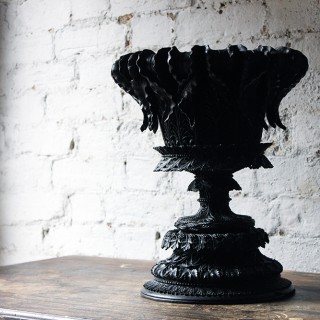 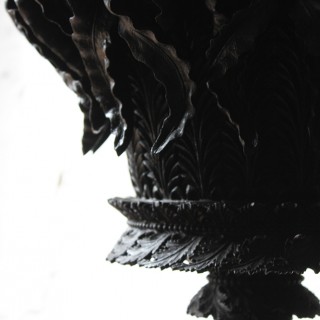 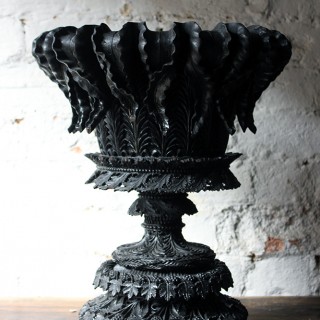 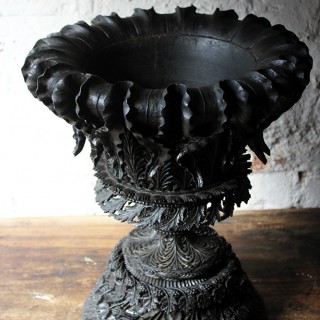 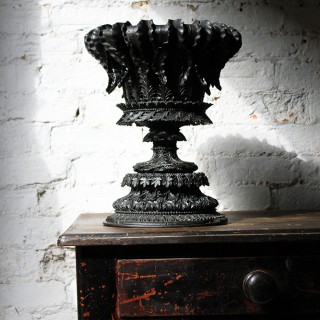 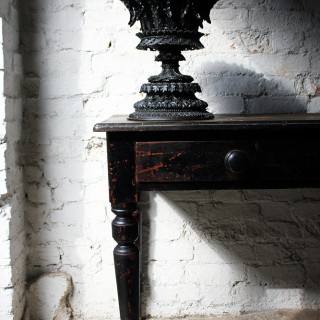 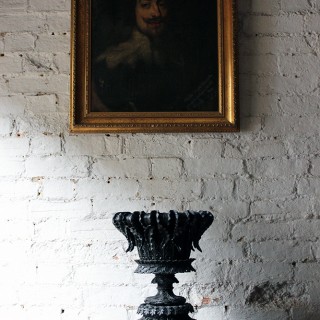 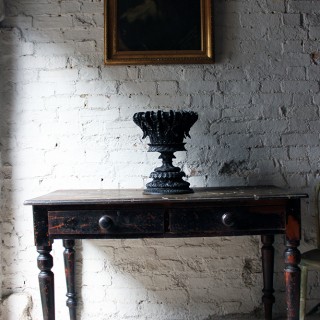 The hugely decorative, profusely carved and generously sized early to mid-nineteenth century Bombay blackwood centrepiece urn of Anglo-Indian origin, being campagna shaped, the bowl issuing acanthus leaves tapering to further naturalistic carving in the form of leaves and stylized berries, the circular socle base with gadrooning and stylized decoration, the underside carved as pineapple leaves, and the whole surviving from the second quarter of the nineteenth century.

The rich leaf work is reminiscent of similar work on Kashmir silver so it could be influenced from that region. This piece displays a level of craftsmanship and skill that is of a very high level, the whole carved profusely and it is not naïve or primitive and would have cost a large amount to commission at the time. It more thank likely acted as a centerpiece for a table either at banqueting or serving with it being able to hold flowers or fruits. We cannot find a comparable urn and it is likely it was made on commission for a wealthy westerner in India at the time.

The group of furniture termed ‘Bombay Blackwood’ was produced over a period of four decades from the mid-nineteenth century. Bombay Blackwood, is so called after the dark hues of Malabar teak and rosewood from which the furniture was made, was a rage among the city’s elite in the nineteenth and early twentieth centuries. The furniture was was of large scale so you needed equally as large estates to hold them. Whilst the designs were British, the craftsmen were predominantly Gujarati and Parsi immigrants from Surat and Ahmedabad; many of them were experienced in shipbuilding, a major industry in Surat, and they were skilled carpenters.

Gradually the designs acquired locally flourished when artisans starting adding Indian touches such as elephants in their carving, which had previously only had typically British floral motifs and this led to Bombay Blackwood being exported to England and the US. The carved chairs, cabinets and tables became a rage in England after they were displayed at The Great Exhibition in 1851, an expo of design and technology from all over the world. After 100 years of Industrial Revolution, handmade objects appealed to the crowds greatly.

A rare object of huge quality and with its decorators scale it bears real showpiece winning style.

The condition of the whole is relatively good. There are three sections of loss to note, which include two small leaves absent, some tips to the ancanthus leaves lost and some loss to the base. Overall approximately 90% of the carving remains in tact and she is very attractive in her entirety. There is a lovely patina present, particularly to the basin and issuing leaves.