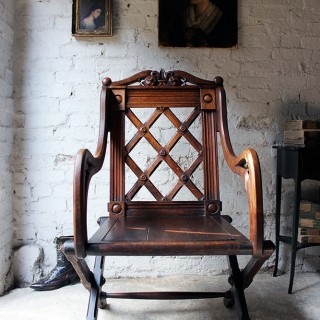 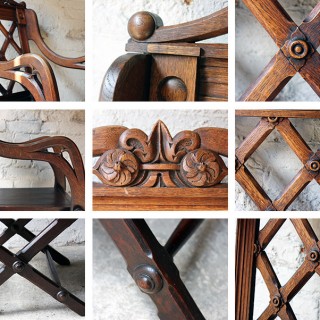 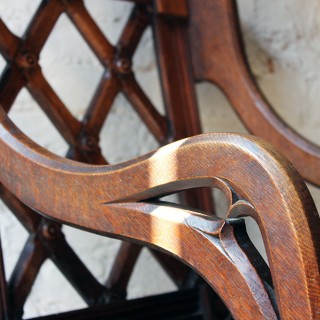 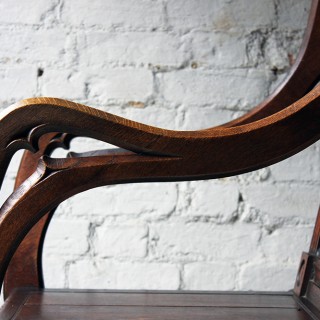 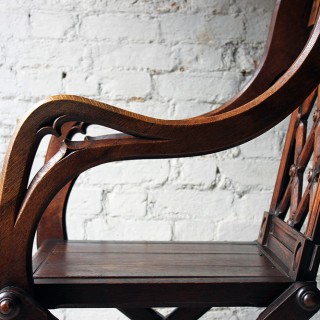 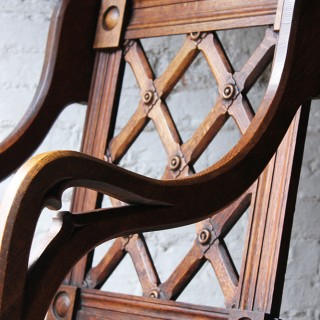 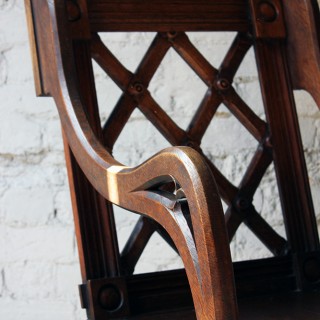 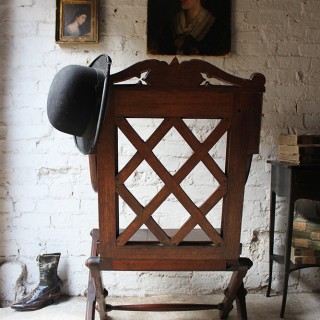 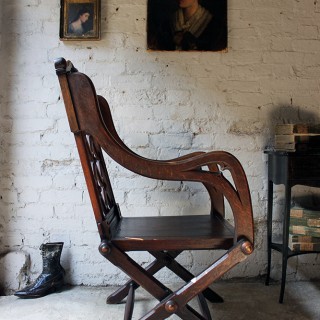 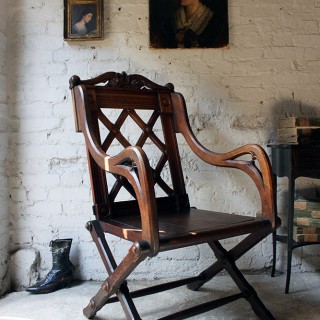 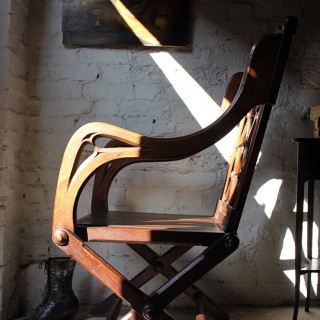 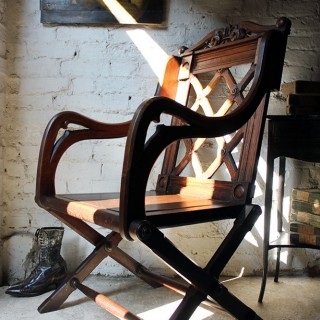 The ecclesiastically inspired ceremonial armchair in English oak having a pierced lattice splat with carved rosette roundels, surmounted by a scrolled and pierced ornament with carved rosettes between a reeded framed border with four large cabouchon mouldings, the pierced and attractively shaped Gothically designed open arms to a three plank seat sitting on X-frame legs and stretchers with further roundels, the whole surviving from early Victorian period England and quite possibly designed by 19th-century English architect, designer and artist Richard Bridgens (1785-1846).

The chair is in very good to excellent overall order with a welcome lack of any form of restoration, there are no breakages or repairs to the legs or stretchers which is commonly found on pieces like this. There is a small section of loss to the rear of the x frame leg section though this is the only flaw we can find on the entire chair. The colour is rich and the oak if the best English quality.

Richard Bridgens (1785-1846) was a distinguished furniture designer for George Bullock, noted for his Gothic designs for Battle Abbey, the home of Sir Godfrey Vassall Webster. Bridgens is also known for his designs in the Baronial style, which was inspired by Scottish Renaissance architecture and relied on the use of dark, heavily carved woods. He also worked for James Watt furnishing such residences as Aston Hall in Birmingham, and Abbotsford House, home of Sir Walter Scott, whose novels encouraged a romantic view of Scotland bolstered support for the new national architectural style.

Among the pointers to Bridgens work we find on this chair are plate 12* showing a ‘design for an armchair, or sofa, anda couch and footstool’ where the roundels are very similar, plate 16 the ‘marqueterie table’ also show the very same employed and a similar surmount to plate 41 the ‘Elizabethan chair’ showing a similar splat back whilst the pierced Gothic tracery shown in plate 59 in the ‘gothic sofa’ is similar to our example.

All plates from “Furniture with Candelabra and Interior Decoration – Primary Source Edition, Richard Bridgens” of 1833.

This chair simply sings quality, it is truly the best of its type having a wonderfully timeless design, perfect in its balance between simplicity and the ornate, made from the best material, possibly designed by the best and certainly executed by the best of the time.