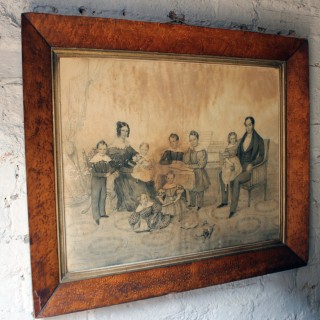 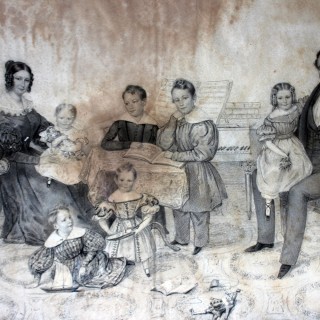 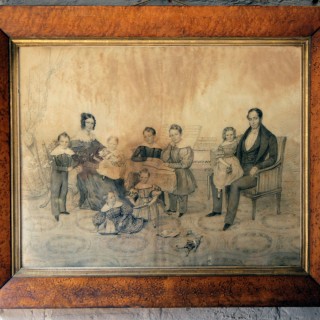 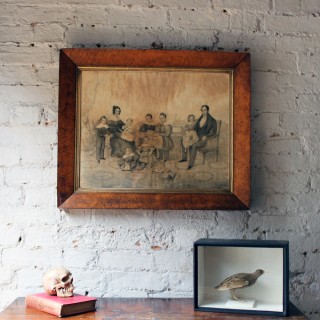 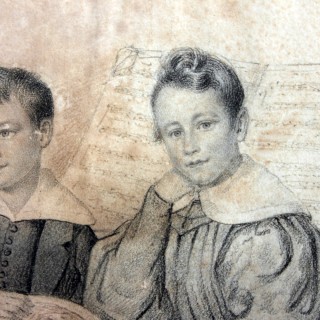 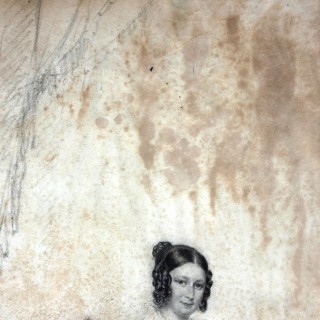 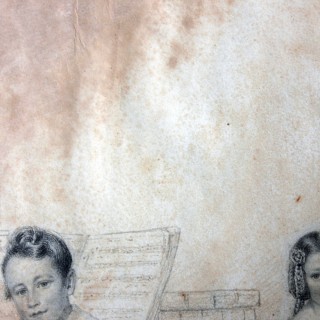 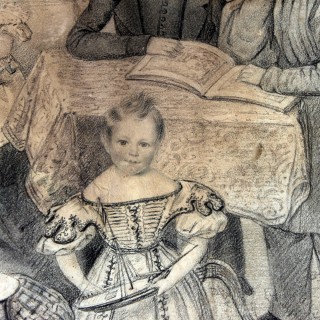 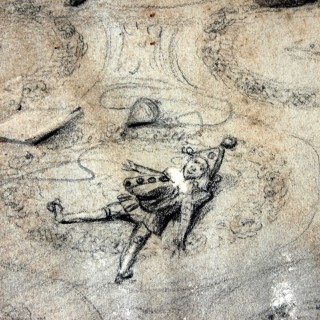 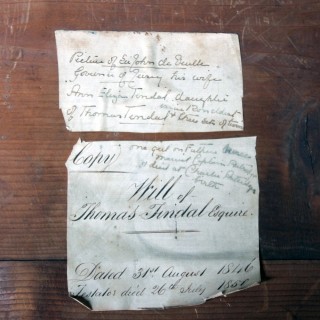 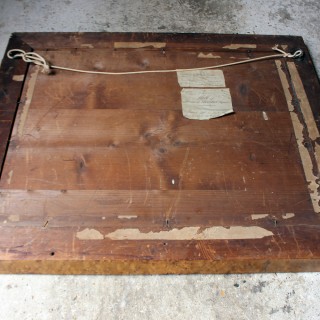 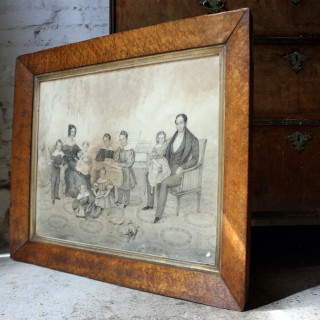 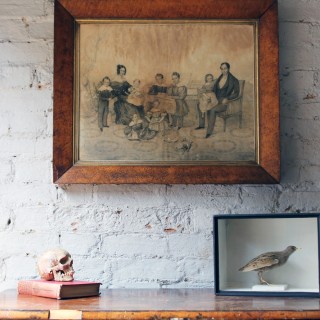 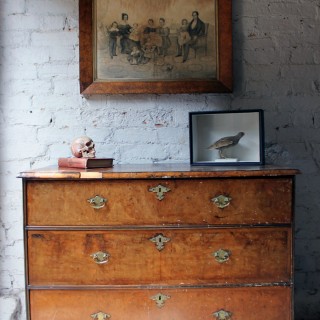 The well depicted study of good size executed in pencil and charcoals showing the family of Sir Jean de Veulle – Bailiff of Jersey 1831-1848 who married Anne Eliza Tindal bearing nine children, here showing seven, shown full length in a drawing room aside a piano, two armchairs and a pedestal table, the children with toys and books, the good and original burr maple frame with gilded slip having labels verso, surviving from the second quarter of the nineteenth century.

‘Picture of John de Vuelle, governor of Jersey his wife Ann Eliza Tindal, daughter of Thomas Tindal, ?? eldest, and three sets of twins, one girl on ?? married Captain Partridge? Died at Charlie ?? birth’ … followed by a label for ‘The will of Thomas Tindal Esquire – Dated 31st August 1846 – dies 26th July 1857’

The execution here is really very good, with small details like the aubusson type carpet and curtain both being more swiftly executed giving a nice juxtaposition between that style and the more precise detail of the family itself. The toys are charming especially the jester to the middle lower.

The large family of Sir Jean de Veulle – Bailiff of Jersey 1831-1848, who married Anne Eliza Tindal, bore nine children, being five sons and four daughters. This drawing depicts seven, so we presume two were lost at birth or that this work was executed before their arrival. The children were named as follows:

The only Bailiff of Jersey known to have fought a duel, Jean de Veulle was born on 25 April 1799, the son of Greffier Jean de Veulle and Elisabeth Messervy, daughter of Lieut-Bailiff Nicolas Messervy. He qualified as an Advocate and was admitted in 1819, but seldom practised. In 1827 he was elected Jurat without opposition, and two years later he married Anne Eliza Tindal, daughter of Thomas Tindal, Treasurer of Buckingham and niece of Lord Chief Justice Tindal. The family connection was to prove advantageous because when Thomas Le Breton (who was painted by Sir by Sir Thomas Lawrence), resigned as Bailiff in 1831, Tindal secured the appointment for de Veulle, along with a knighthood.

Although he was to hold the office of Bailiff for 17 years, Sir Jean was not really suited to it. He had been epileptic from his early years and did not really have the strength of character to stand up to the Advocates in his Court, nor even his own Jurats. In 1832 he described a petition presented by Charles de la Garde, Colonel of the East Regiment of the Militia as “the works of a few restless agitators” and was challenged to a duel. He accepted the challenge, although duels were against the law, and shots were fired at Jardin d’Olivet, although neither man was injured. A few months later political leader Advocate Francois Godfray clashed with the Bailiff in the States over his report of a delegation to England and each accused the other of inviting a duel. Godfray was suspended from his role as Advocate and the Privy Council heard an appeal, reversing this decision but criticising both men.

Later that year de Veulle refused to appear as a witness in a case involving Godfray and the Lieut-Governor, Sir William Thornton and was imprisoned for contempt of court by his own Jurats. By 1848 he was prepared to resign, but died of a fit at his father-in-law’s house on 1 June and was buried at Aylesbury.

An obituary in the Chronique summed up the views of most:
“His disposition was upright, and his integrity beyond suspicion, but he had not enough energy or courage to punish or even to reprimand subordinates less scrupulous than himself”.

A picture of good unusual size for its type, showing the beautiful intricacies of a prominent and large family.

The condition of the drawing is fair to good. There is darkening and yellowing to the paper, mainly to the top, so the picture does appear in aged condition though there are no tears, rips or attempts at restoration or cleaning. There is a section to the mid-left with some small-flecked losses. The frame has a two losses to its edges and general wear. Please view the photographs for visual reference.