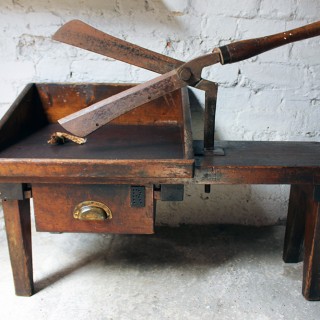 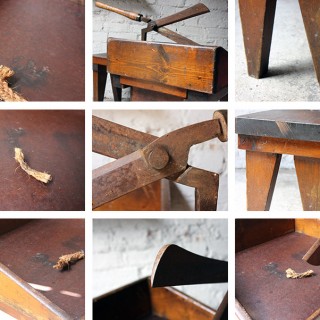 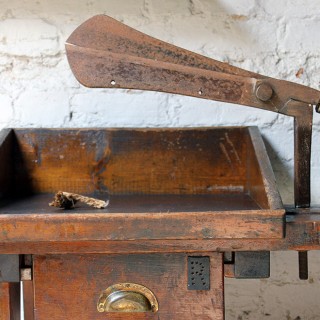 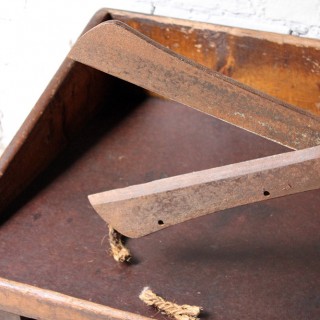 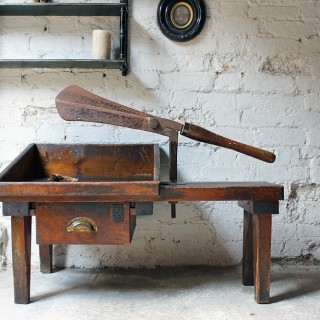 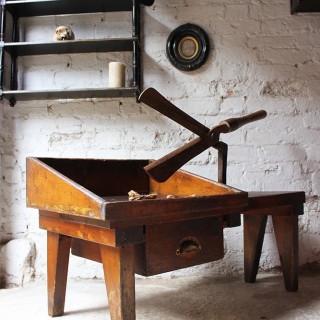 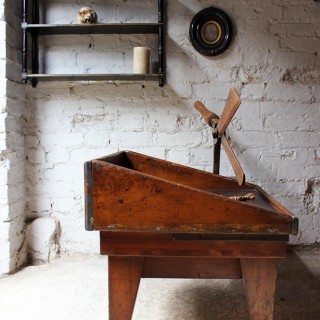 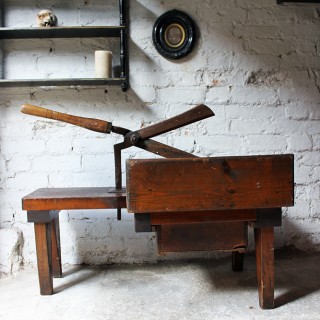 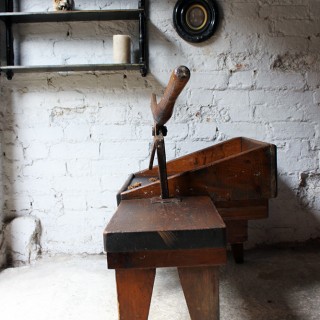 The unusual, and unique, workbench table constructed primitively and primarily in pine, for the cutting of leather or raw fibres, the construction similar to that of a cobblers bench with galleried cutting section, large integral Regency period iron shears with iron mounts, lower frieze drawer with original cup handle and makers initial in leather; ‘R, the whole sitting on tapered legs with a wonderful colour through heavy use at Lancaster Moor Hospital, formerly the Lancaster County Lunatic Asylum, in the Victorian period.

The condition is very good overall for its age with a pleasing colour and superb crusty patination to the handle of the shears, the top surfaces and the drawer front in particular. It obviously has the signs of daily use and wear to the extremities. The shears still operate and the drawer slides nicely. The handle is original with a nice green patination (though dented) and helps to further date the piece. There are no losses or repairs. There are some wooden blocks, small pieces of rope, iron fittings and other associated item inside the drawer.

Lancaster Moor Hospital, formerly the Lancaster County Lunatic Asylum and Lancaster County Mental Hospital, was a mental hospital in Lancaster, Lancashire, England, which closed in 2000. It was opened in 1816 in a building by architect Thomas Standen; a further building, known as “The Annexe” was opened in 1883, designed by Arnold W. Kershaw in gothic style and is grade II listed, as are its walls, railings, and gateways. The hospital’s chapel was built in 1866 by E. G. Paley and is grade II listed. The Asylum is a quadrangular building of stone construction, with a grand front, relieved by pillars of the Doric order, and at one time could hold up to 3,200 patients.

The Lancaster County Lunatic Asylum played a crucial role in the development of the treatment of the mentally ill not just in Lancaster, but throughout Lancashire. For hundreds of years there was a lack of understanding with regards to mental health, even far into the 1900’s. However, the change that occurred between treatments in the Early Modern era and those used in the Victorian and Modern era developed greatly. Despite its contribution to development, it is still difficult to ignore the negative feelings and memories attached to the Moor Hospital. It carries a stigma of mistreatment, like many other asylums, that is hard to remove.

Nevertheless, the hospital was a pioneering site for the humane treatment of the mentally ill. The writer Alan Bennett describes his mother’s treatment in the hospital in his memoirs.. Since the hospital’s closure in 2000, the Annexe and chapel have been converted into apartments, and houses are being built in the grounds. This piece was removed at this time.

Indeed, this piece has come directly from a vendor who sourced it at the time of the asylum’s closure in 2000. The story that accompanies the piece is that the workbench was essentially part of occupational therapy for the patients in late Victorian times, with the Glasson dockyard only six miles away from the site there was the opportunity to work at the docks, if and when, rehabilitation was achieved. It might well have been used for cutting up lengths or strands of old rope that were then unravelled (by the ‘lunatics’) to use as oakum for the caulking of deck seams on wooden sailing ships. This was a common form of employment in orphanages and work-houses, especially around ports (and Lancaster was a port in earlier times). This gave the patients the training they needed in case they ever found work in the docks. The used rope in sailing ships were a captain’s perk and sold (hence the phrase “money for old rope”) either to remake into ropes or unpicked for oakum. Alternatively it may have been used for leather-work or in an in-house cobblers (these existed in some asylums) and the initialed ‘R’ to the frieze is made from punched leather so this may be a clue.

The primitive construction, materials used and the punched leather rectangle for the maker ‘R’ to the frieze all point to a piece made for use inside an institution. The maker ‘R’, would have been suitably proud of his contraption and he or she was probably a recovering or part recovered patient that could be trusted to use and handle the equipment. There is no other explanation for a piece of this kind and we can be 90% sure of its provenance and intended use. The piece could be further researched and we feel there is enough information in existence to prove its provenance beyond doubt.

We also cannot find any other table like this anywhere having been sold whereby shears are integral to the table. One would surmise they are integral simply because if they were a separate entity they could be used to maim or kill which would make total sense in this type of establishment; therefore they are attached with bolts to the underside. The shears are stamped ‘Gambia’. This was a company based in Sheffield in the 18th Century located on Pea Croft. In 1787 Abraham Greaves was a shear maker marking them “Gambia.” George Greaves was a manufacturer of garden, tailor, tinman and brush shears and his mark “Gambia” was recorded at 54 Scotland Street (Gells 1825).

Some case notes for a patient at the Lancaster Asylum in 1840 prove harrowing:

Admitted this day 8th April 1840:
A vagrant from Wigan aged 48 no cure.
Says she is married and has had seven children, much excited and violent and spits.
Born in Drogheda Ireland . She is swarthy with a low forehead.
Religion Roman Catholic she says she can read and write she is in good health mind a little impaired and very seldom spits at anyone,
incapable of being employed has dirty habits. Employed in sewing.

MARCH 26th 1844
For a length of time attentive to her habits complexion clearer and quit left of spitting tolerably .Neat in her person constantly employed
in the wash house where she is very industrious though less rambling in her conversation than formerly is now sometimes heard to talk absurdly.

FEBRUARY 17th 1851
No change in mind talks incoherently about her past life and confuses people and places. States that she has been at the battle
of the Nile, Trafalgar, Corunna, Waterloo and Valencia . Is practically and industriously employed in the washhouse

MARCH 28th 1857.
Has been failing in health since time appraisal legs odenatious and has lost much flesh.

APRIL 4th
Unable to leave her bed and is very weakly.

APRIL 11th
Scarcely to take any liquids less power of observation has a sore over sacrum.

APRIL 18th
Died this day of old age and debility…

Now, we don’t know about you but we are transfixed…