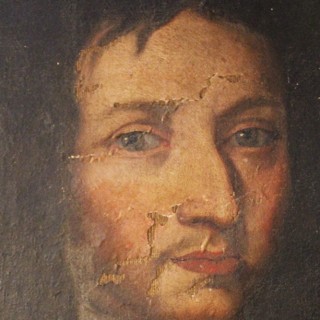 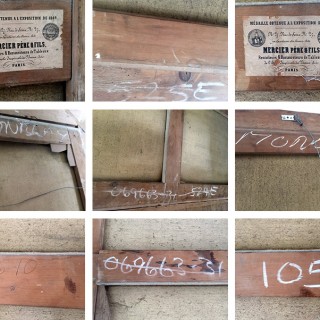 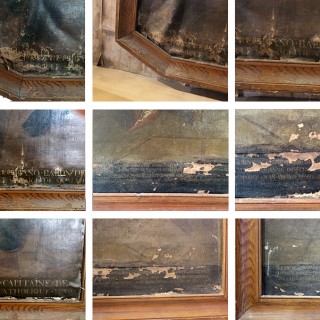 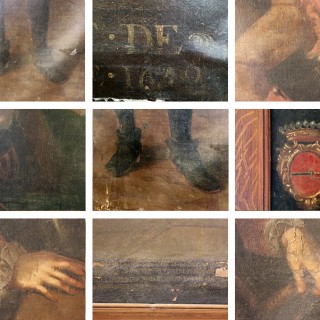 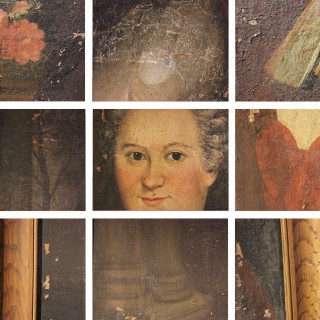 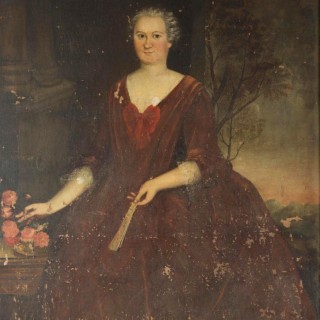 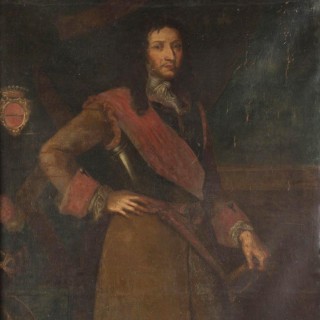 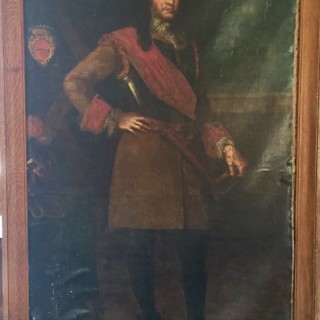 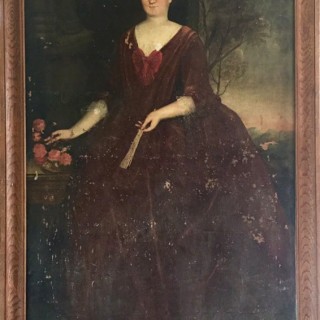 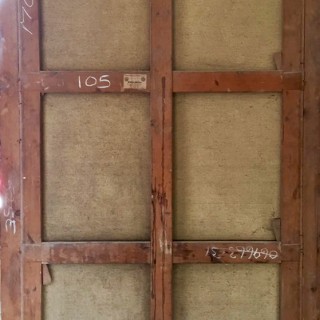 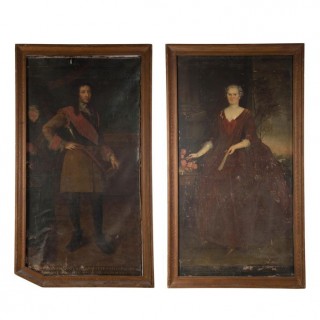 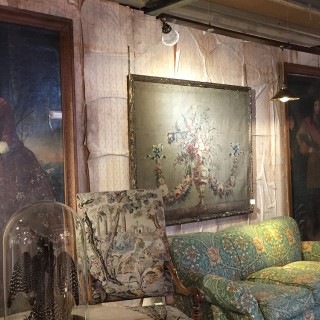 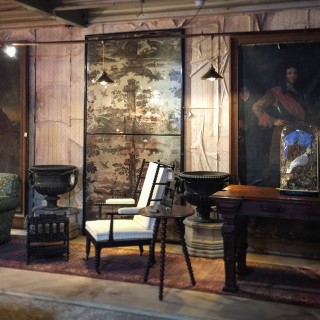 The very large French School oil on canvas portraits at approximately eight feet high each, in faux grained painted frames, depicting the Comtesse de la Rochelle and Rene Ferdinand de Precipiano, Baron de Cuse, both in their splendour, amongst country house settings and both surviving from the second quarter of the seventeenth century, and from the Fonthill Abbey estate in Wiltshire, UK.

Fonthill Abbey, Wiltshire (Possibly from the Collection of William Beckford

The gentleman, stands full-length, in armour with a lace collar holding a cane, a plumed helmet at his side, before a stone pillar and a view to a landscape beyond and there is his crest and coronet also on show. The lady, also full length, holds a fan and a bouquet of flowers, in a scarlet dress with a woodland landscape beyond and two stone columns to the other flank.

There are a few inscriptions to the stretchers verso, one being ‘Mowbray’ along with other numeric inscriptions. There are also labels to each for the exposition of 1849 in Paris; the labels reading: “Medaille Obtenue A L’Exposition De 1849… No. 27 Rue De Seine en face la rue des Beaux Arts.. Mercier Pere & Fils, Rentoileurs & restauratuers de Tableaux de L’ecole Imperiale des Beaux arts..Paris” . It is likely that this father and son business reframed the pictures at this time and gave them new stretchers in the middle of the nineteenth century.

The inscriptions at the bottom to each are written in French and tell us that the sitters are the Countess of De La Rochelle, France and the portrait of Rene Ferdinand de Precipiano, Baron de Cuse is dated to 1639. There is much that is rather illegible to both of the inscriptions but with careful study and possibly some light restoration the full text could be deciphered easily enough.

The first appearance of a house at Fonthill comes in 1533, when Sir John Mervyn purchased the estate and lived in a house surrounded by a park. A hundred years later Fonthill House, sometimes called Fonthill Antiquus was owned by Lord Cottington, Chancellor of the Exchequer in Charles I’s reign. The house and estate was sold to Alderman William Beckford, Lord Mayor of London, in 1745. He altered the house which was known as Fonthill Redivivus redesigned the lake and built a temple and a pagoda. Interestingly there is a John, Lord Mowbray in William Beckfords bloodline so the name on the back of the canvas may well be a reference to this decendent. William Thomas Beckford was an English novelist, a profligate and consummately knowledgeable art collector and patron of works of decorative art, a critic, travel writer and sometime politician and he resided at Fonthill for some decades.

These pictures were clearly hung in a very specific location due to portrait of the Baron having a canted corner, (possibly for hanging flush to part of a staircase or some such), and both pictures would have been hugely expensive to create at the time of their commission.

The provenance of these pictures is very intriguing, particularly if there are records of the pictures in the collection of William Beckford, and there is a huge amount of further research that could be carried out to fully realise the importance and value of this splendidly prominent pair of paintings.

The pictures and nineteenth century frames are both in undeniably decorative, primarily left untouched for at least approximately 380 years, there is a commensurate amount of craquelure across the canvas and the frame, with paint loss to the wholes, please see the photographs for visual reference. The pictures are dirty and if cleaned they would become something entirely different, but it is in this condition that we simply love, their faded grandeur speaks of both Italian and English country estates.