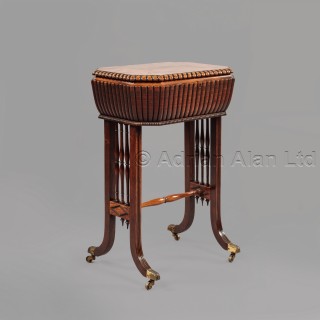 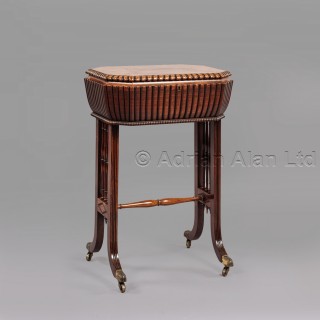 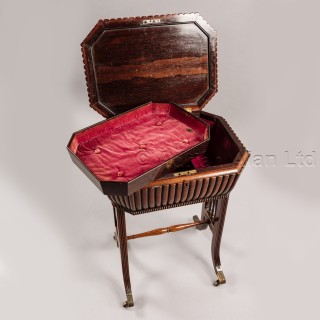 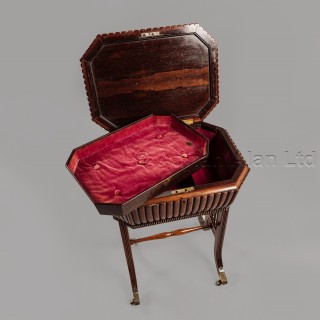 A Work Table in the Manner of Gillows.

The hinged lobed sarcophagus compartment enclosing a tray and compartments.

The name Gillows has been associated with the craft of furniture-making since the reign of George II. Gillows furniture is prized for its well chosen timbers and fine quality of craftsmanship. Furniture produced in the latter part of the eighteenth century shows a prediliection for elegant forms, while finely figured mahogany and robust design characterize furniture of the early nineteenth century. The history of Gillows, from the early eighteenth century to the early twentieth, encapsulates the history of English furniture and its manufacture.

Gillows was established around 1730 by Robert Gillow some 20 years before Thomas Chippendale, and was one of the most renowned British cabinet making firms. They developed first a national and then an international reputation as a supplier of quality furniture to the upper middle classes, the landed gentry, and the aristocracy. The company won commissions to furnish and decorate public buildings in Australia, South Africa, India, Russia, Germany, France and the U.S., and it also executed Pugin’s designs for London’s Palace of Westminster from 1840 onwards.

If Gillows is less of a household name than Chippendale, Sheraton or Hepplewhite, it is because the firm kept its pattern books, the Estimate Sketch Books, a closely guarded secret, for craftsmen and customers only. They boasted the widest stock outside London, and, uniquely for a provincial company in the eighteenth century, had workshops and showrooms in the capital on Oxford Street.

They often worked in conjunction with other cabinet making firms on large domestic furnishing commissions, such as Denton Hall, Otley where they worked alongside Thomas Chippendale during the late 1770’s, and Wokington Hall, Cumbria, from which examples of the furniture are at the Abbot Hall Museum, Kendal.

In the nineteenth Century Gillows were involved in several celebrated projects, most notably the furnishing of the Palace of Westminster throughout the 1850’s and 1860’s, for which they worked from Pugin designs; and the ‘Pet Sideboard’ to designs by the ubiquitous Bruce Talbert which won first prize at the London Exhibition of 1872. This sideboard was bought by the Victoria & Albert Museum, and is illustrated in Simon Jervis ‘Victorian Furniture’, p.59, pl63.

Gillow of Lancaster, also reputedly invented the Davenport for a Captain Davenport in the 1790’s.

Burkett, M and others. A History of Gillows of Lancaster.

Whitehead M., ‘The Gillows and their work in Georgian Lancaster’ in Catholic Englishmen, ed. J.A. Hilton, 1984.

in the manner of gillows