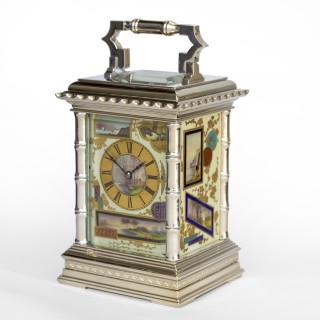 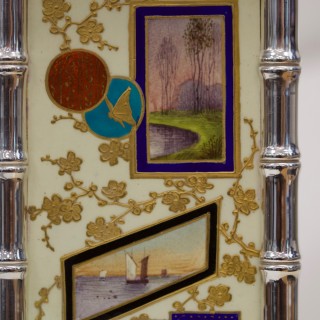 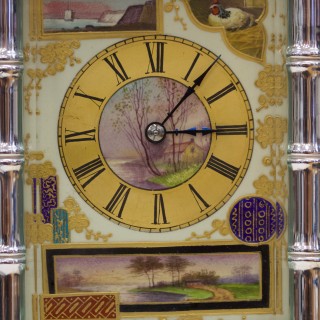 The eight-day gong two train gong striking movement has the original silvered platform lever escapement. It is stamped to the lower left hand corner of the backplate with serial number 138.

The three porcelain panels are painted in polychrome and gilt with asymmetric panels decorated with a Japanese-influenced design. Panels of hand-painted scenes are executed in exquisite detail. The front panel has a coastal scene, a river landscape and a country house, and a chicken roosting, each bordered in gilt and surrounded with gilt cherry blossom branches. Apparently randomly-placed turquoise and red rondels and rectangles add vibrance to the overall effect. The dial centre has a gilt Roman chapter ring and with blued steel spade hands.

The silver-plating of the case is in perfect condition. The case has bamboo columns over a moulded plinth base engraved with a geometric frieze. The case is surmounted with a caddy top moulding and scalloped cornice, and a Oriental-inspired design of handle, which folds back. An Aesthetic movement carriage clock with the identical case (and similarly influenced porcelain decoration possibly by the same artist) features on the back cover of Derek Roberts’ book, Carriage and other Travelling Clocks.

Examples of these bamboo carriage clock cases are rare, with the pagoda-style one such as this rarer still. Add to this the silver-plated finish, and I have never before seen another.

The base of the case bears a trademark A D within a diamond, the trademark of clockmaker A. Dumas who worked at 44, Rue Bonaparte in Paris, and probably Saint-Nicolas d’Aliermont. He is known for making carriage clocks with porcelain panels. The Revue Chronométrique,  June 1880 p.89, Vol. XI says that Dumas specialises in mignonettes which he makes very well.  [see Carriage Clocks, Their History and Development, by Charles Allix and Peter Bonnert]

The V&A describes the Aesthetic movement (1860-1900) as focused on producing art that was beautiful rather than having a deeper meaning – Art for Art’s sake. ‘A Japanese inflection – featuring asymmetry, flat patterning, simplified form and elegant surface ornament – became a hallmark of the Aesthetic vocabulary.’