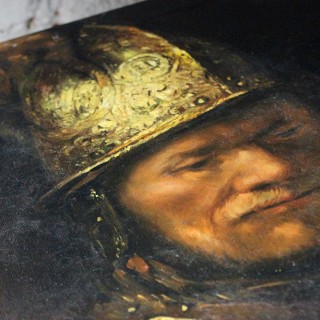 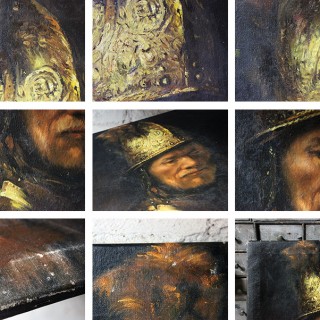 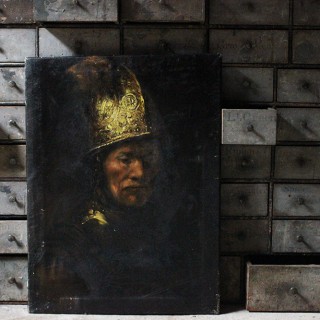 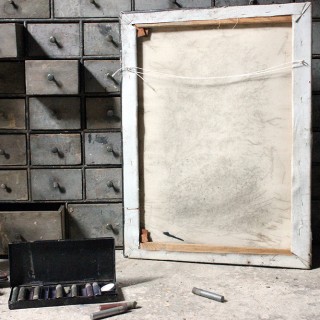 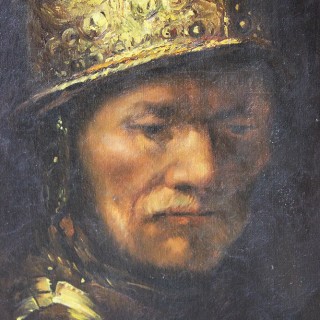 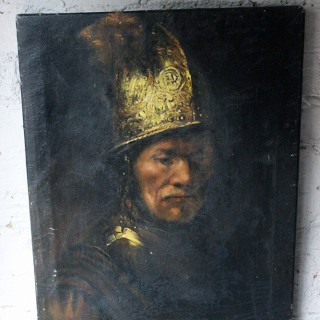 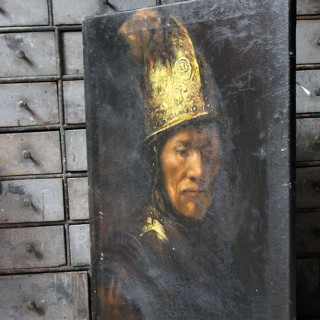 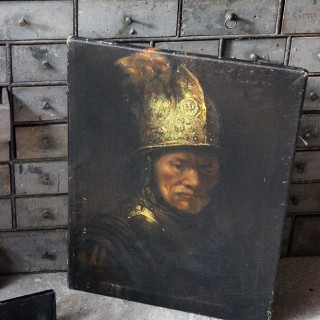 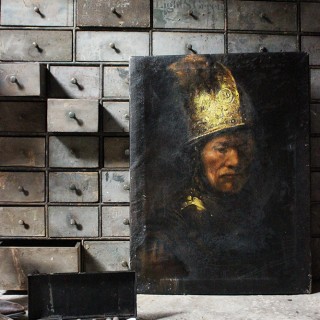 After Circle of Rembrandt; A Good 19thC Oil On Canvas; ‘The Man with the Golden Helmet’

Painted in typical Rembrandt style, with contrasting light and darkness, the work depicting half-length, the head and shoulders of an elderly man looking broodingly downward, dressed in European light armour with a neck plate and a plumed, golden helmet survives from the nineteenth century.

The Man with the Golden Helmet (c. 1650) is an oil on canvas painting formerly attributed to the Dutch painter Rembrandt and today considered to be a work by someone in his circle. It is an example of Dutch Golden Age painting and is now in the collection of the Gemäldegalerie, Berlin. Critics had have suspected for years that the painting was not a Rembrandt with some suggesting it might be 19th-Century copy in a style “more Rembrandt than Rembrandt.” Others thought it might be a Rembrandt original tinkered with during a restoration. The sitter is identified as Rembrandt’s brother Adriaen, but as Adriaen was a poor shoemaker in Leyden while Rembrandt lived in Amsterdam, and moreover, Adriaen van Rijn died in 1652 this sitter occurs in pictures of the year 1654, this identification remains unsure.

Our picture, which is competently rendered, shows the sitter is turned a little to the right ; his eyes are cast down and he wears a dark coat with purplish-red sleeves. On his head is a richly wrought gilt helmet with ear-pieces and a plume of short white and red feathers. The dark background contrasts with the strong light falling from the left at the top to the tin helmet and, touching the face as it passes, onto the breast.

An evocative picture in every sense, of the golden age of Dutch painting and of Rembrandts distinctive style, and painted by a deft hand too.

The painting is in unrestored and un-cleaned condition and is presented unframed. It could possibly benefit from being re-stretched and adding a stretcher as the canvas is a little slack. There are some fleck of paint loss mainly to the edges; please see the photographs for visual reference.

After Circle of Rembrandt; A Good 19thC Oil On Canvas; ‘The Man with the Golden Helmet’