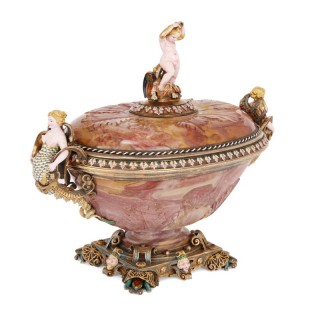 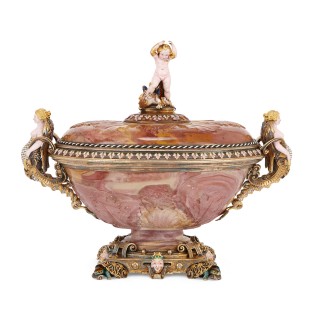 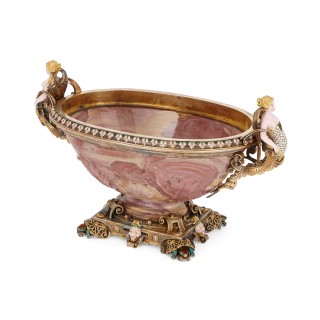 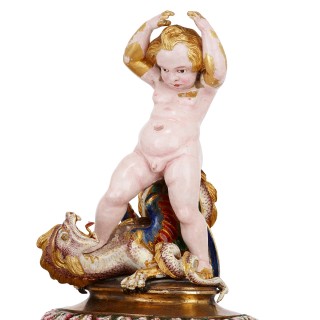 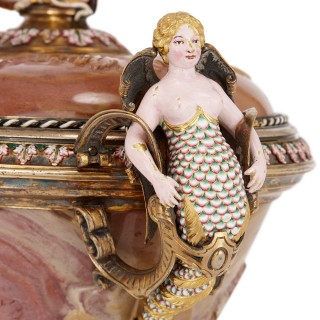 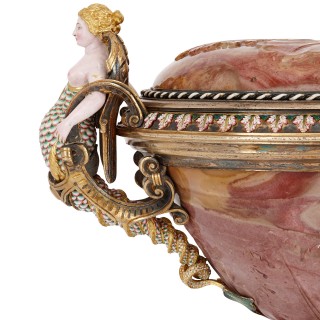 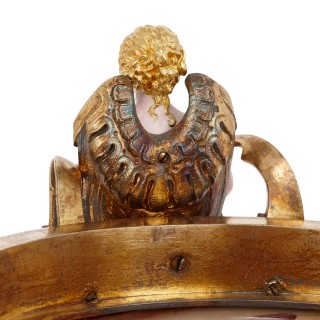 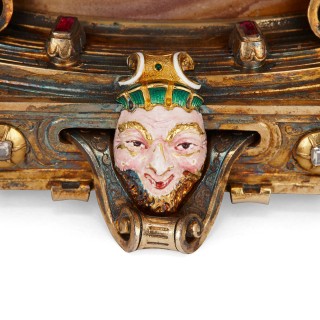 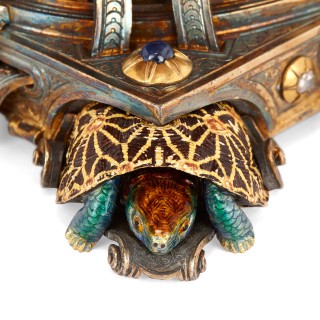 This exquisite work of art was created c.1836-40 in France by the acclaimed French gold and silversmith, Jean-Valentin Morel. Using only the finest of materials and with exceptional attention to detail, this magnificent piece is without doubt one of the finest creations within the field of decorative arts in the 19th century.

The body of the cup has been crafted from the pinky-red and orange gemstone, agate, and fitted with gold and silver-gilt mounts, which have, in some places, been jewelled and enamelled. Morel specialised in high quality hard stone cups, such as this, which were often inlaid and decorated in a 16th Century Renaissance revival style. The jeweller was highly-skilled and won awards for his work, including the Medal of Honour at the 1855 Paris Exhibition.

The cup is set on a square-shaped silver-gilt plinth, which rests on four feet. These feet take the form of turtles, who carry the weight of the base on their shells, their green and brown enamelled bodies projecting out slightly. The plinth is mounted on all four sides — in the space between the turtles — with masks, which are painted in flesh-tones and fitted with hats. The foot of the cup is secured to the plinth by scrolled brackets, which are accompanied by precious stones set into roundels.

Above, a slim, short moulded stem supports the wide cup bowl. This bowl is decorated with relief carvings of acanthus leaves, and is fitted, along its mouth, with a silver-gilt band. This is ornamented with a string of white enamelled leaves, set against a dark green ground. A second border, consisting of twisted a black and white rope form, rims the lid. The cup is set with two enamelled handles, which take the form of winged sirens, with golden hair, exposed breasts and long, twisting green, white and pink fish tails. This mouth of the cup is topped by a shallow lid, which, like the bowl, is decorated with acanthus leaf carvings. The lid is crowned by an enamelled finial, which has been modelled as a golden-haired putto, with his arms above his head and leg raised as he tramples down the dragon below him.

The plinth features the maker’s mark of Jean-Valentin Morel.