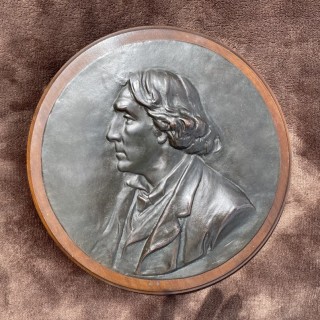 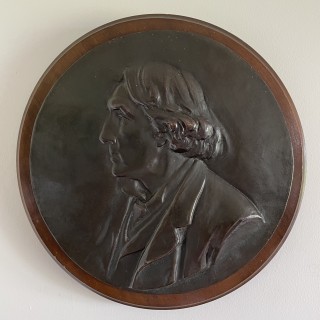 This is the large of Tofts two portrait medallions of the famous actor Sir Henry Irving. This plaque was originally sculpted in 1887 and re-cast in 1904, on the death of Irving, by the Alfred Barnard Foundry. Not bearing the foundry mark, this appears to be a later cast. A very similar version was recently sold in the Fine Art Society sale at Sotheby’s, 5 February 2019, lot 86.

A sculptor of the New Sculpture movement, Toft first trained at Wedgwood and attended art schools in Hanley and Newcastle upon Tyne. He won a scholarship to study modelling under Lanteri at the South Kensington Schools in 1881-3. He was a successful portrait sculptor who also produced decorative and architectural sculpture. He was elected to the Art Workers Guild and in 1938 was elected a fellow of the Royal Society of British Sculptors.