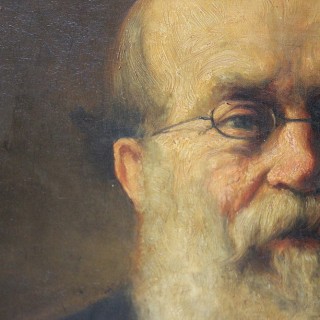 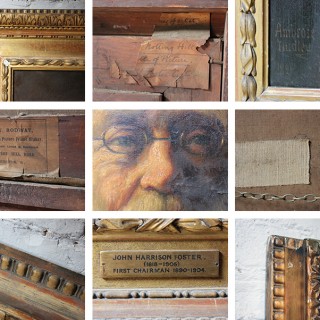 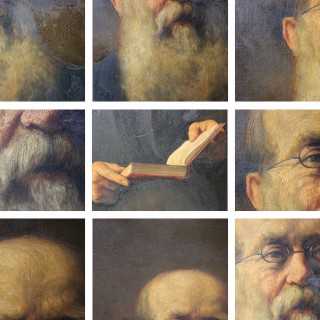 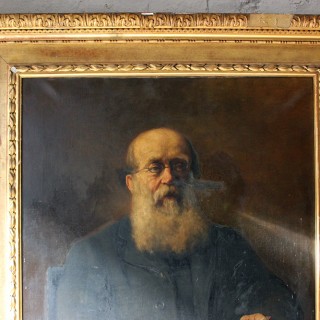 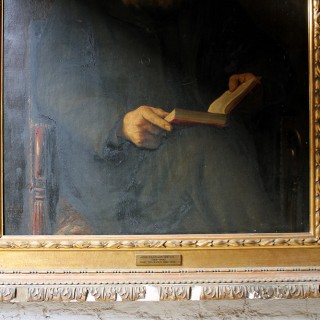 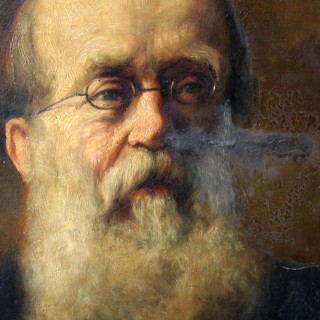 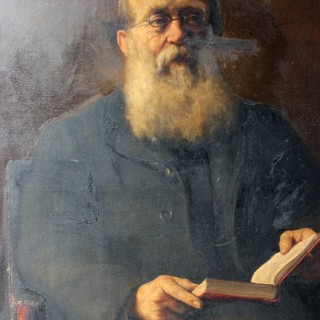 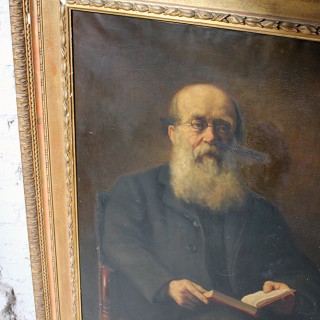 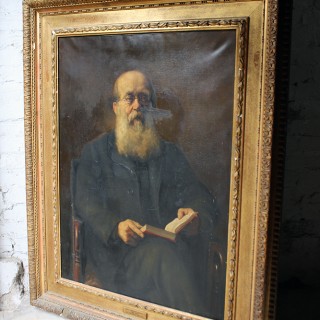 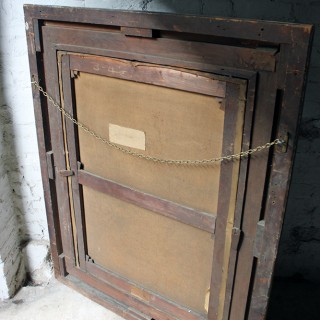 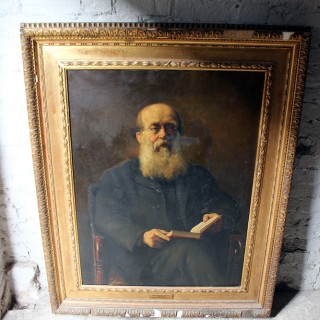 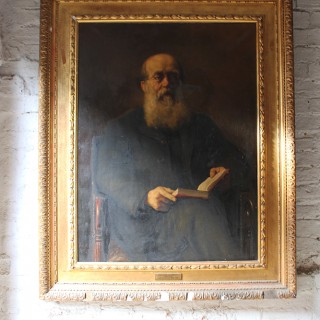 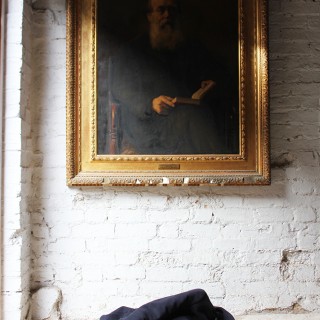 The large and well realised depiction in oils on canvas of John Harrison Foster 1818-1905 seated three-quarter length in a black coat holding a book in a period leather and mahogany armchair; the work signed and dated 1891 Ambrose Dudley, presented in the original gilded oak and composition Watts frame, bearing a plaque reading ‘John Harrison Foster (1818-1905) First chairman 1890-1904’’ and with a label Geo W Rodway, 152 Campden Hill Road, Kensington W attached to the stretcher, survives from the zeniths of Victorian England.

The level of skill seen in the painting is pretty high, especially for a 24 year old painter, the sitter being 73 years of age when depicted, and he is shown with a hint of a smile, his demeanor kind and warm, with a thick bushy beard and round spectacles, wearing a dark buttoned woollen overcoat, and perusing a book, the impression that here we have someone who was highly educated and liked to be considered so. The whites of his eyes are still apparent and are rendered well, and his apparent benelovent character is beautifully captured, we think.

With regards to the frame, George William Rodway (1866-1937) was born in Cheltenham but had moved to London by 1892 when he married in Kensington. In the 1901 census, he was listed as a picture framemaker (worker), age 34, living at 11 Holford Place Chambers, Kensington. On his trade label, Rodway advertised as carver, gilder and picture framemaker, offering to clean, line and restore pictures (label on Margaret Carpenter’s John Bird Sumner, National Portrait Gallery).

We do not know much of the sitter but the plaque reading ‘First chairman 1890-1904’ indicates he was a man of standing and we can find records of his family tree online.

The artist, Robert Ambrose Dudley, was born in 1867 in Kensington, London, the second son of the painter and illustrator Robert Charles Dudley and his wife Amelia. Little is known about his early years, although it is likely that Ambrose grew up in Kensington.

At the age of 24, in 1891, when he painted this very portrait, he was still living with his parents, and his occupation was described as “student-in-art”.

By 1901, Dudley – still living with his parents – was a full-time artist. At the time of the 1911 census he was visiting the home of Edward Shearburn Marshall in Taunton, Somerset. His book illustrations appeared over a period of at least 30 years, and Dudley was also a landscape and portrait painter whose work was exhibited at the Royal Academy. He died in Kensington in 1951, aged 84.

The picture and frame are both in undeniably decorative, largely left untouched, there is a commensurate amount of craquelure and dirt across the canvas and the frame has losses to the mouldings as photographed with the attractive pink bole showing through the gilding in many areas. There has been one repair to the mid-right centre with a patch to the rear and some over-painting to this repair. There are also remnants of a paper label verso which indicate that the sitter lived in Notting Hill, London.