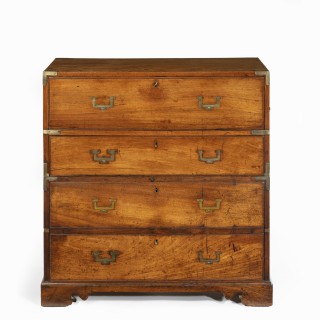 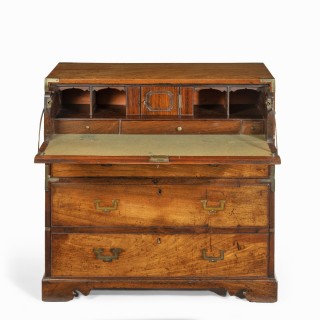 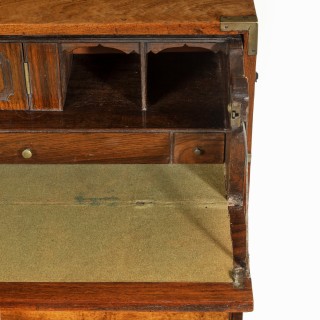 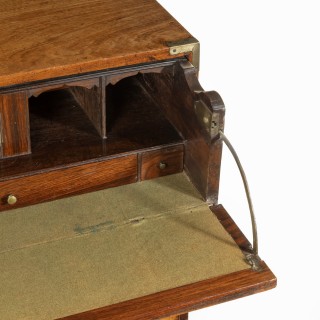 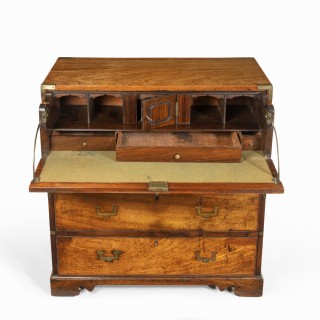 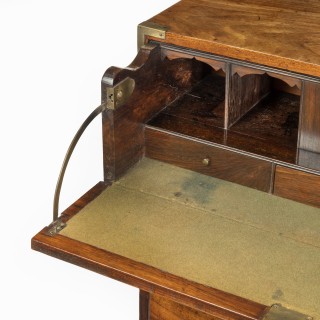 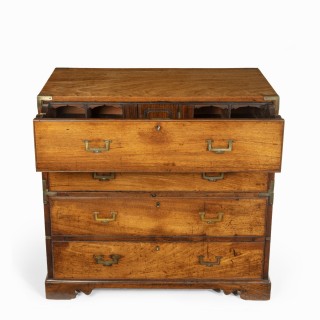 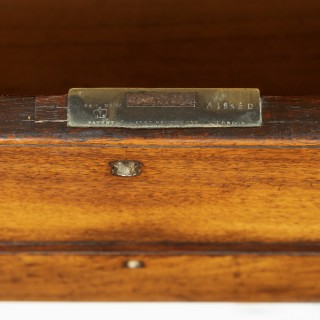 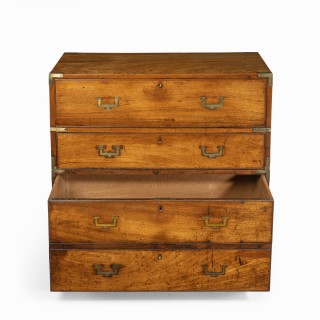 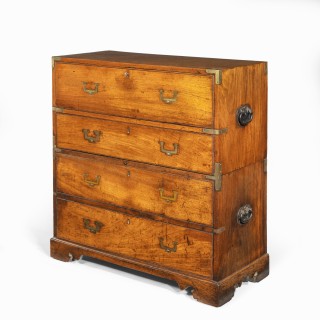 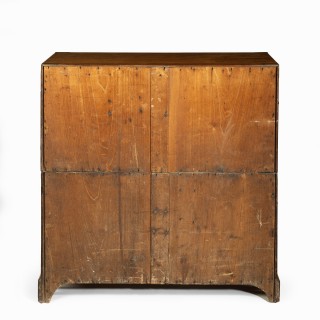 An Anglo-Chinese hardwood naval officer’s campaign chest. This chest (probably padouk) is of typical rectangular form, in two brass-bound sections with black-painted carrying handles on the sides. The top section has a fitted secretaire drawer above a single long drawer in rosewood or hardwood with mahogany drawer linings. The front opens to reveal pigeon holes and small drawers, including a hidden drawer behind a small door with a single hinge. The lower section has been adapted so the two drawer fronts disguise a single drawer deep enough to accommodate a naval officer’s hat. The drawers have flush handles and English locks stamped ‘Chubb’s New Patent A1845D, 27.St Paul’s Churchyard, London’. Together with three tobacco pouches found in the secretaire, one inscribed in pencil, ‘S E Lark, Lieu Paymaster R.N, 11 Woodland Terrace, Plymouth’. Chinese, circa 1820.

According to handwritten notes accompanying the pouches, S. E. Lark, aged 34, was assistant paymaster on HMS Royal Adelaide in 1881 in Davenport. Subsequently, according to the ‘Annals of Tristan da Cunha’, he was paymaster, under Captain R J Fortescue, on HMS Swallow (1885-1904) when she visited Tristan da Cunha on 31st January 1890. However, the entry in the ‘Navy List of Pursers and Paymasters’ has a differing history for

Carl L. Crossman, The Decorative Arts of the China Trade, Suffolk, 1991, p. 227, pl. 80 shows an earlier chest, with a similar secretaire drawer, but made as one piece, which ‘is replaced by the more practical two part campaign chest/desk’ in the 19th century.

Charles Chubb (1779 – 1845) opened a hardware business in Winchester before moving, with his brother, Jeremiah, to Portsea, in 1804. He opened the company’s London Office at 57 St. Paul’s Churchyard in 1820 and by 1823 had been awarded a special licence by George IV and had become the sole supplier of locks to the General Post Office and to Her Majesty’s Prison Service. In 1851, he designed a special secure display case for the Koh-I-Noor diamond for its appearance at The Great Exhibition, London, 1851.