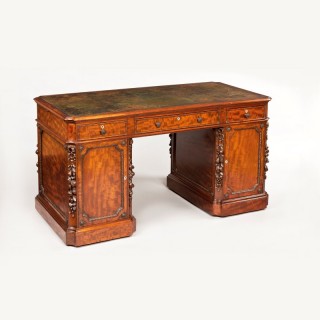 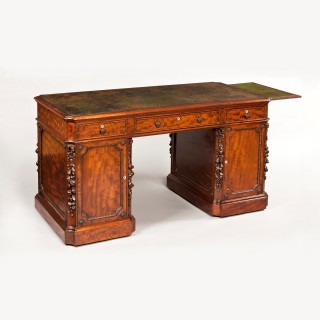 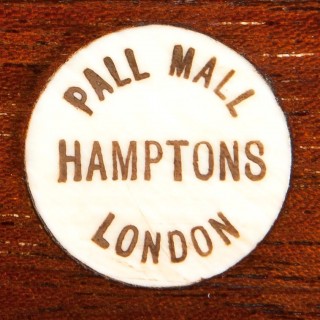 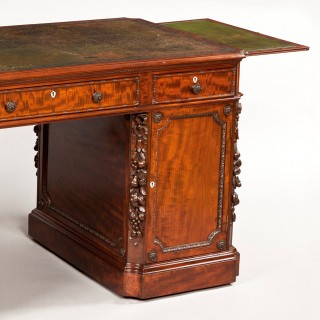 A Pedestal Desk of Superb Quality by Hamptons of Pall MallOf free standing double sided form, constructed in a fiddle back mahogany of superb colour and patination; rising from a plinth base with incurved radiiused corners; of the four fielded panel lockable doors, two have internally fitted banks of eight drawers, with chased brass handles, and two reveal shelved interiors; the upright stiles at the angles and kneeholes are richly carved with fruiting foliates; three lockable drawers in the frieze, fitted with ovolo and dart mouldings and circular carved wood knobs, and at each end, extensible plan slides; the writing surface a tooled leather hide. Throughout, shield shaped ivory escutcheons and Hobbs locks have been employed for all keyholes. The central drawer bears an inset circular plaque with the makers name, ‘Hampton of Pall Mall’. Circa 1870

Hampton and Sons Ltd of Pall Mall East, Trafalgar Square LondonEstablished in 1830 in Cranbourn Street, Leicester Square by William Hampton, later being joined by his sons, George and William, the company moved to 8 Pall Mall East, adjacent to Trafalgar Square, in very large premises, trading as builders and surveyors, estate agents, ‘antique and modern furniture dealers’, general furnishers, upholsterers, plumbers and electricians. Their commissions included, inter alia, the furnishing of the Royal Yacht Britannia, the liners Queen Mary and Queen Elizabeth, the Theatre Royal in Drury lane, and the palaces of the Nizam of Hyderabad and the Maharajah of Kashmir. An incendiary bomb destroyed the building in 1940, after which they moved to Kensington High Street, where they traded until 1960.