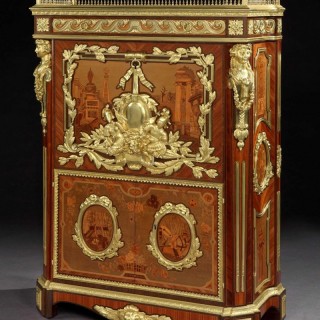 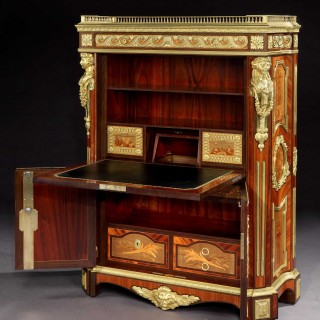 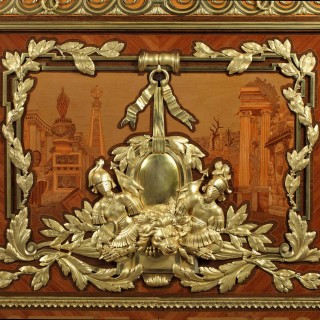 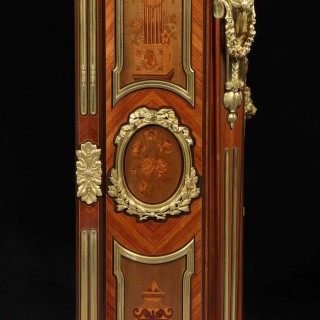 An Antique Secretaire by Maison Rogie of Paris

A Truly Magnificent 19th Century Secrétaire à Abattant by Maison Rogié of Paris After the original in the Wallace Collection, made in 1777 by Pierre-Antoine Foullet.

Constructed in kingwood, cross banded in tulipwood and purpleheart, having contrasting specimen woods used in the marquetry inlay, extensively dressed with gilt bronze mounts of the highest quality; the bracket feet conjoined by a shaped apron, sporting a centrally sited ormolu winged male profile, and incurved sides; the canted front angles dressed with female caryatids; the upright concave sides having centrally sited elliptical floral marquetry panels enclosed within ormolu frames, with panels of marquetry inlay depicting architectural subjects within shaped serpentine frames; the lower compartment having two doors veneered with elliptical panels of marquetry within conforming gilt bronze frames, centred in a field of floral marquetry, arising from a bouquet, enclosing an interior fitted with four marquetry worked drawers and a pigeon hole; the upper compartment, a counterweighted and lockable drop-front is veneered with panels of pictorial marquetry depicting classical architecture framed within an ormolu leaf cast frame, incorporating a pendant trophy flanked with two helmeted cuirasses either side of a lion, whose head projects over a central bracket; within the fall front are shelves and two marquetry inlaid drawers, four secret drawers and a leather tooled writing surface; the upper apron is dressed with ormolu Vitruvian scrolls with square paterae at the angles, and over, a three quarter baluster gallery enclosing a Carrara marble top. One bronze mount stamped ‘Rogié’.
French, Circa 1880

A French Noble Family from the Loire Valley.
By oral family tradition and repute, our secretaire was purchased from the estate of the Parisian apartment of Sultan Abdulhamid the Second by the grandfather of the vendor, in approximately 1910, when the Young Turks usurped the last members of the dying Ottoman Empire, confiscating their possessions. Tradition further stated that it had been originally purchased from Maison Rogié, a name unfamiliar to us, and at one time, we were advised, the documentary evidence of the purchase invoice, including other objects, was extant, but although missing, might re-appear. During the conservation of the piece, an ormolu mount was noted to have the name ‘Rogié’ on the reverse, verifying a major part of the family tradition. The Wallace Collection, collated in 3 Volumes by Peter Hughes, published by Trustees of the Wallace Collection, Manchester Square 1996
Pierre Kjellberg; Editions de l’Amateur, ‘Mobilier Français du 18th Siecle
Ref 8114

Pierre-Antoine Foullet received as Maître on 11th April 1765
This celebrated secretaire by Pierre-Antoine Follet, dating to 1777, had at one time in the early 19th century been in the collection of the d’Hane-Steenhuyse Family of Ghent, and was acquired by the 4th Marquess of Hertford before 1870, appearing in the Rue Lafitte inventory of 1871. Exhibited at Bethnal Green from 1872-1875 (when, presumably, access was granted to prepare the ground work for the Maison Rogié piece). In 1898 it was recorded in the Hertford House inventory as being situated in the Canaletto Room. At present, it is on display in tandem with our piece, a wonderful and probably one –time opportunity to see these pieces together.

An Antique Secretaire by Maison Rogie of Paris