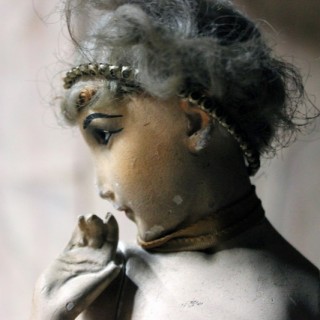 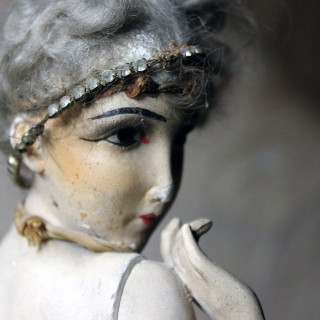 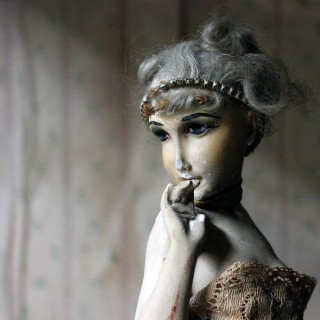 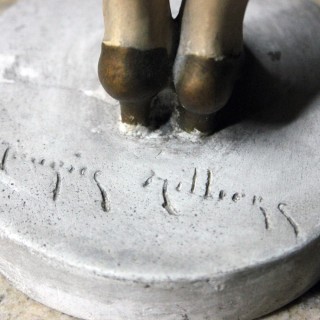 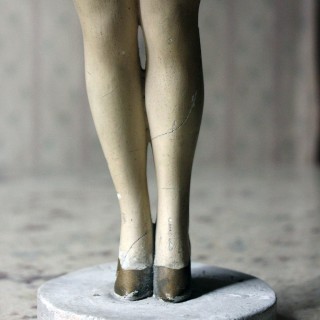 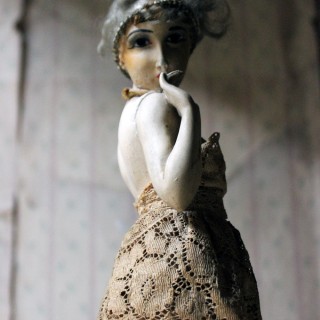 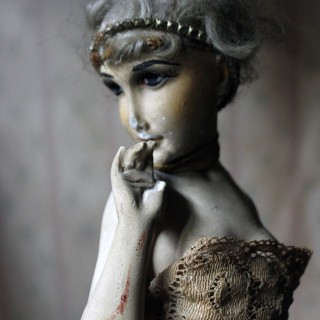 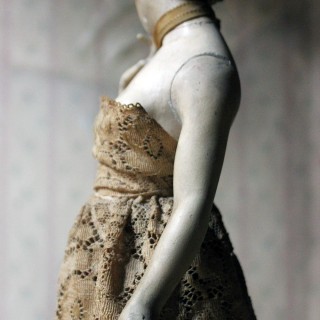 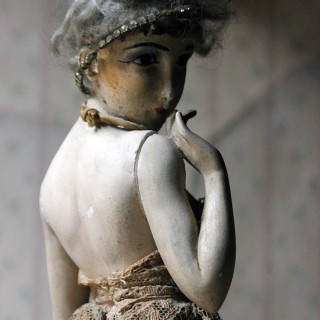 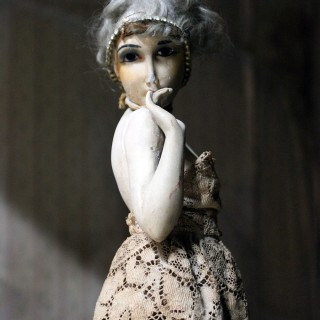 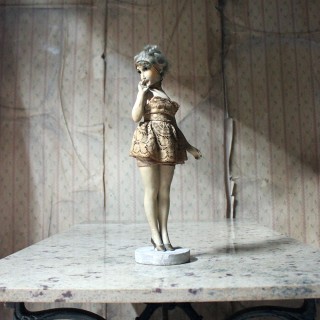 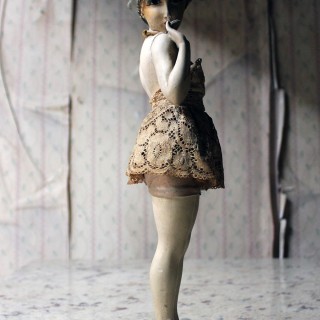 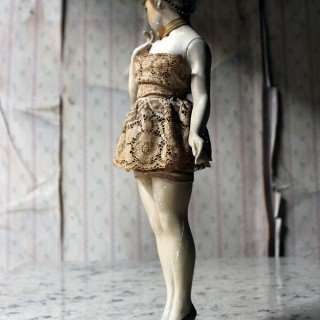 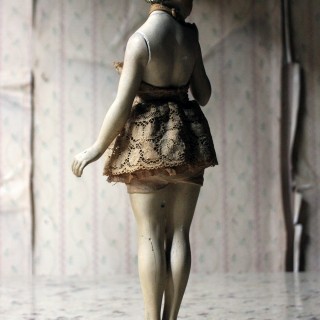 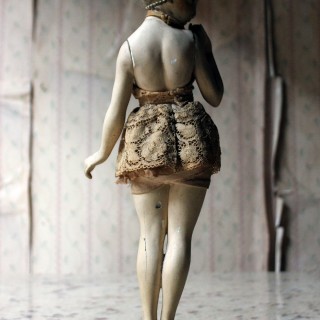 The hand decorated plaster boudoir doll or figure, standing upon a plaster chalk base modelled as a demure, yet coquettish fashionable flapper girl, her head turned to the side, dramatic painting of facial features and eyes, mohair wig, jointed arms, one arm posed bent at the elbow with finger held to lips, high heel posed feet with gold painted shoes, wearing her original flapper-style lace dress and diamante headdress, the base signed Maurice Milliere and surviving from the first quarter of twentieth century France.

Unknown.An unmistakable symbol of the ‘Roaring Twenties’ is the rebellious flapper; her dress flowing wildly, her hair chopped and bobbed, her knees exposed; flappers were essentially a generation of young Western women in the 1920s who wore short skirts, bobbed their hair, listened to jazz, and flaunted their disdain for what was then considered acceptable behaviour.

During the early 1900s, there was a fad for pretty plaster ladies, often dressed in real materials, even if it was just a filmy lace chemise. Perhaps the best known of these chalkware coquettes are the charming plaster poupees designed by the famed French Boudoir artist Maurice Milliere (1871-1946). The French artist is noted for his stylistic etchings of fashionable women, in the genre known as boudoir art. He was born in Le Havre to upper working class parents; his father was a merchant’s clerk. His early artistic interests are not known, but he completed his secondary education at the Ecole De Beaux Arts in Le Havre before travelling to Paris in 1889 to continue his studies at the l’Ecole des Arts Decoratifs and l’Ecole des Beaux-Arts.

He was a contemporary of Louis Icart, although some his early etchings (from c1907) predate those of Icart. Milliere served as an early inspiration to Alberto Vargas and Enoch Bolles and was undeniably a commercial success. In addition to his original works of art such as the oil paintings and etchings, he was a prolific commercial illustrator, being commissioned to create images that were used in magazines such as La Vie Parisienne, Le Sourire — reprinted in US during the 1920s — and Fantasio, on postcards, posters, menus and product packaging. He was awarded Medaille d’Or at the L’Exposition Coloniale. Millière died in 1946 at the age of 74.

These figures were generally named and inscribed as such – this one has no name and suggests it may be an earlier than most example; she is perhaps most similar to the figure named ‘”Naiade”.

A scarce piece by a desirable artist and one that very much encapsulates this period.

The figure is in as found condition, being fair, and completely original, with some grubbiness, small fissures and chips, as per the photographs to the leg, neck and chips to the face and fingers. The jointed arms are slightly loose, with a newer elasticated fabric attachment, with the head-dress needing to be re-aligned and with a small red tarnish mark to one arm.