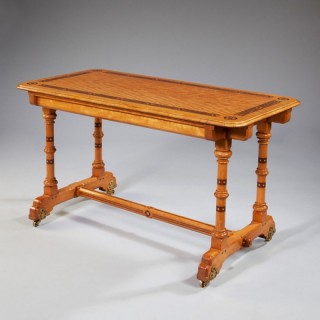 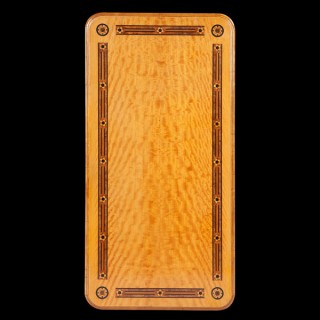 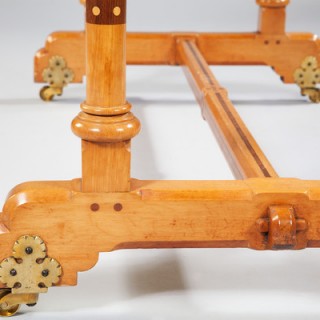 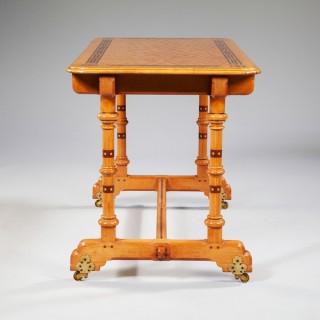 AN ARTS AND CRAFTS SATINWOOD WRITING TABLE BY MARSH AND JONES

An Arts and Crafts satinwood writing lavishly inlaid with stylised foliate ornament and multi layered cross banding. The table is supported on turned columns joined by a stretcher supported on a scroll ends, terminating in trefoil brass casters.

By and bearing the label for Marsh and Jones with the craftsman’s pencil signature.

This desk is en-suite with a group of pieces made and supplied by Marsh and Jones for the Mill owner Titus Salt. John Marsh and Edward Jones purchased in 1864 the old established Leeds business of John Kendell. They established a showroom in London in Cavendish Square. The commission from Salt, to celebrate his recent marriage, came in 1866, early in their career and it must have been very significant for them as it encompassed and entire furnishing right down to the soap for the wash stands. The furniture was designed by Charles Bevan and many pieces were illustrated in contemporary magazines and widely appreciated as very ‘modern’. The commission was installed first at Baildon Lodge near Shipley, Yorkshire; but in 1872 it was moved to their new home at Milner Field, Saltaire, Yorkshire, where it was used during the celebrated visit of the Prince and Princess of Wales in 1882. From here it passed by decent until it was acquired by the Nation and installed in its current home at Lotherton Hall.

The suite is very distinctive having a blond wood base wood and multiple exotic woods used to make geometric foliate ornament. The casters are an unusual form being trefoil and the blacked screws form an ornamental addition rather than being mere fixings; these can be seen on other pieces in the suite. The details of the marquetry can also be observed in other pieces in the suite. It is therefore almost certainly the case that this desk formed part of the original group.

AN ARTS AND CRAFTS SATINWOOD WRITING TABLE BY MARSH AND JONES