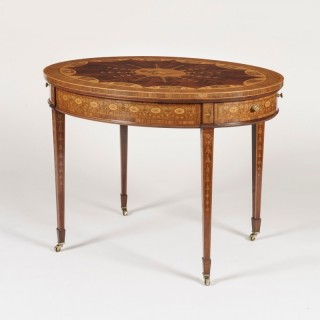 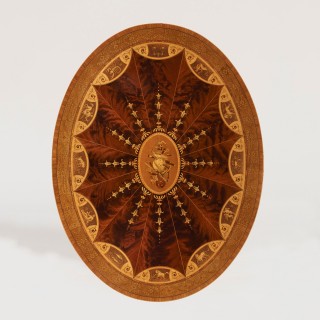 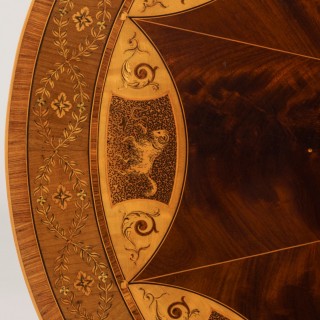 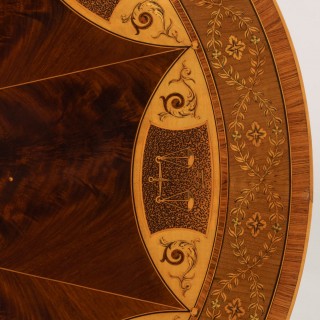 Constructed in very finely figured mahogany and satinwood , and having marquetry inlay of superior quality, rising from square-taper legs and spade feet on castors supporting the oval top; a central cartouche housing astrological instruments, set within radiating segments inlaid with bellflowers pendant drops and terminating in a twelve-lobed band of semi-circular segments containing the signs of the Zodiac; all set within a floral border of specimen wood composition and satinwood crossbanding. The apron and legs similarly inlaid with fine marquetry of geometric floral oval inlays and continuous swags.
Circa 1890

Founded in 1841 by John Maple, manufacturing and retailing from the hub of the furniture centre in London’s Tottenham Court Road, and through the founder & his son’s drive and excellence of the products of the company, expanded greatly, to have further workshops and points of sale in both Paris and Buenos Aires, and later, a shop in Smyrna. Clientele included Queen Victoria, King Edward V11th, members of the Royal Household, the King of Siam, and the Nicholas, Tsar of Russia. Later, Maples would furnish the Royal yachts, the QE1, QE2 and the Queen Mary, as well as hotels in Nice, London, Paris and Siam.