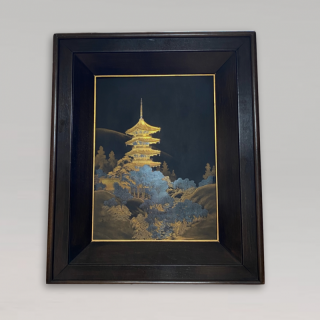 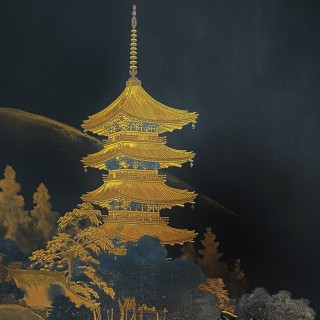 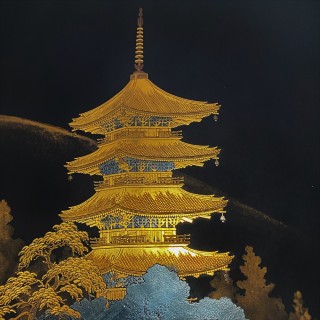 A stunning iron panel decorated with gold inlay depicting a five story Pagoda or Gojunoto. (It is possibly The Gojunoto at the Kofuku-ji Temple at Nara Park.)
In a dark wood frame, this is a wonderful piece worth viewing. Our photographs do not do it justice.
For more information or to arrange an appointment, please don’t hesitate to contact us.

The Japanese pagoda used to function as reliquaries or shrines, they were important in the Buddhist faith but over time have lost their function. They are not often seen in more modern temple compounds, but are still and iconic Japanese image. They can be made of wood or stone and range from about a meter tall with a single story to thirteen levels and 14 meters tall the largest being in Nara.

Originally established in 668 in what is now Kyoto, Kofuku-ji temple was moved another two times before being moved to it’s present location of the city of Nara. It was built by Kagami-no-Ōkimi as a wish for her husbands recovery from illness. It was once one of the powerful seven great temples of Nara and is currently the headquarters of the Hosso School Buddhist sect.