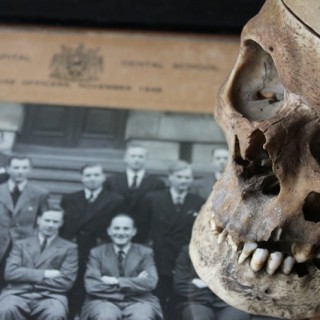 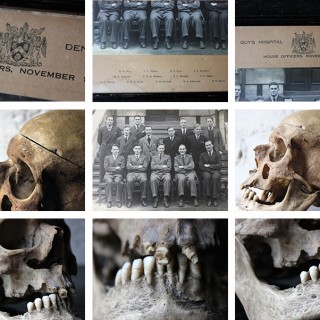 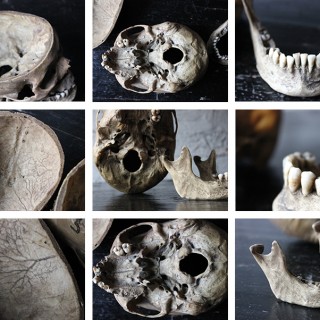 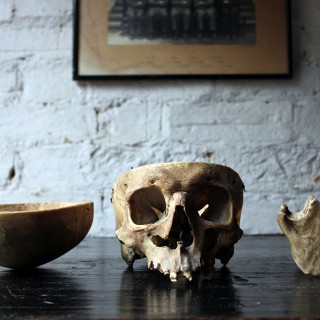 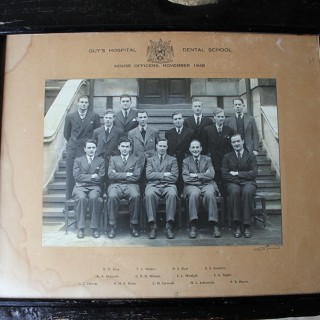 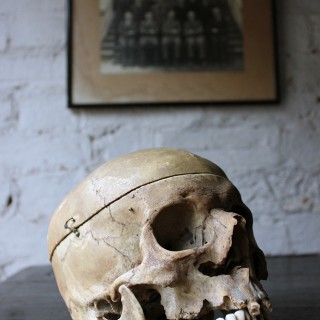 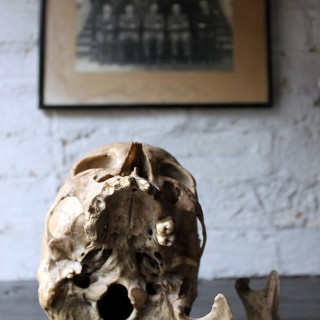 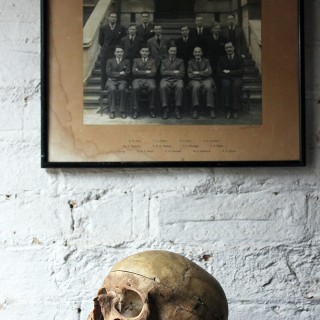 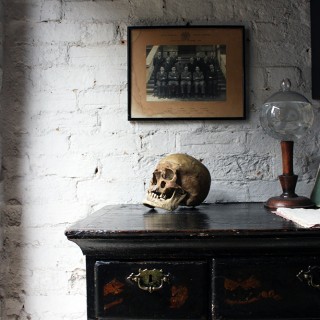 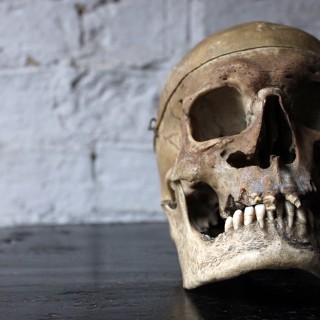 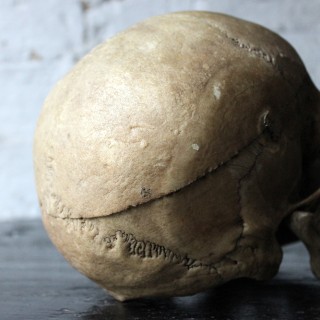 The largely in-tact human skull dating to at least the early twentieth century, having bee used for odontology and medical study together with a black and white photograph of Guy’s Hospital Dental School House Officers, taken in November 1948.

This skulls main purpose would have been for forensic dentistry or odontology, being the study of the structure, development, and abnormalities of the teeth. However it may well have been used for phrenology and for other medical purposes throughout its life at Guy’s hospital. There is a possibility that the skull is late nineteenth century, and Victorian in date. Based on the idea that as the skull takes its shape from the brain, the surface of the skull can be read as an index of psychological aptitudes and tendencies, skulls such as this were part of the jigsaw of Victorian medical study.

It was believed that by examining the shape and unevenness of a head or skull, one could discover the development of the particular cerebral ‘organs’ responsible for different intellectual aptitudes and character traits. For example, a prominent protuberance in the forehead at the position attributed to the organ of Benevolence was meant to indicate that the individual had a “well developed” organ of Benevolence and would therefore be expected to exhibit benevolent behaviour.

The photograph shows the officers of Guy’s Hospital Dental School in 1948 and the names that are present on the photograph read as: Gray, Walker, Dyer, Saunders, Robinson, Watson, Woolgar, Taylor, Farow, Rowe, Furnivall, Lefcovitch, Morris.

Guy’s Hospital is a large teaching NHS hospital in the borough of Southwark in central London, founded in 1721 by Thomas Guy, a publisher of unlicensed Bibles who had made a fortune in the South Sea Bubble. It was originally established as a hospital to treat “incurables” discharged from St Thomas’ Hospital. Guy is interred in the crypt of the Chapel of his foundation. The Tower Wing (formerly known as Guy’s Tower) is the world’s tallest hospital building, standing at 148.65 metres (487.7 ft) with 34 floors. Guy’s Tower is divided into two sections of which the top floors (floors 18-30) represent the dental school, where students of King’s College London Dental School study and practise, and the lower floors (Ground-18) represent the medical departments.

Guy’s has expanded over the centuries and is home to the largest dental hospital in Europe. Its services include routine dentistry, dental surgery, oral medicine and specialist dentistry. In addition Guy’s also provides emergency dental services, and oral and facial surgery with the majority of work being performed by students. This skull was probably handled by dental surgeons, as well as dental nurses, dental hygienists, dental therapists, dental technicians and medical photographers; all of which are equally important to the efficiency of the hospital’s dental care services.

Human skulls are relatively rare in the first instance though when they do appear they very rarely carry any sort of provenance and so this example is scarce and as such proves desirable.

The skull remains in sound overall order. The lower jaw is loose to the whole and the skull-cap is hinged so that it can be removed. There is a well established patination to the entire surface. The skull has about 50% of its teeth still in tact and in place. There is a cavity to the front cheekbone which is possibly how the person died.