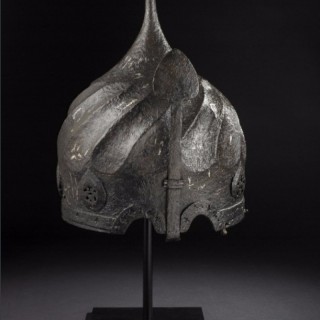 The skull of one-piece construction, formed as an ogival dome drawn up to a separate slender iron finial, the latter involving a globular moulding pierced with a band of minute holes , with a band of spiral broad flutes encircling the middle of the skull, and with arched cut-outs over the eyes. Fitted with an encircling row of small lugs or vervelles just above the lower edge of the base for attaching an aventail, a narrow iron band attached by rivets and also encircling above the vervelles, continued in two additional pieces about the contours of the ocular arches and decorated throughout with a running pattern of pierced quatrefoils punctuated by very small circular holes. The lower portion of the skull fitted with an encircling row of six iron decorative bosses, drop-shaped and each with convex centre pierced with a decorative pattern. Retaining its original adjustable nasal-bar passing beneath an iron staple, the skull retaining traces of Arabic pious inscriptions arranged in bands damascened in silver, and in un-restored condition throughout, with lightly conserved heavily oxidised surfaces.

This helmet compares closely with another in the Metropolitan Museum of Art, New York (Inv. No. 04.3.460) which retains its engraved ornament and is consequently attributable to the late 15th century Turkman style: it follows, therefore, that the present example should share this attribution, and the attribution also to a possible Istanbul workshop.

Within this Turkman category of helmets the addition of the pierced decorative iron bands riveted about the base of the skull bind the present helmet to a much smaller sub-category, to which the example cited above belongs also. Further examples of helmets possessing this uncommonly seen characteristic include three in the Askeri Müzesi, Istanbul, one in the Musée de l’Armée, Paris, and one in the Museo Nazionale del Bargello, Florence (see Damiani and Scalini 2002). The further addition to the present helmet of six decorative bosses is of additional rarity for an example from this period.

For an account of the helmet in New York and for a brief survey of the known examples within the sub-type to which it belongs, see Alexander 2015, cat. no. 27, pp.80-81.

Provenance: Almost certainly the Ottoman arsenal in Istanbul, which existed prior to the Ottoman capture of the city in 1453 as the church of St. Irene. The arsenal was cleared of much of its armour and weapons by order of the Sultan Abdülmecid I in 1839-40, whereupon armour such as this was released to the European art market. 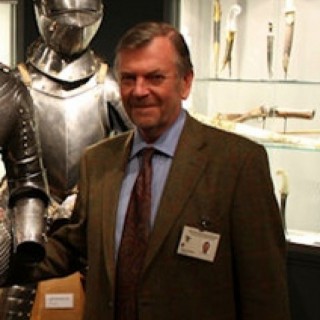