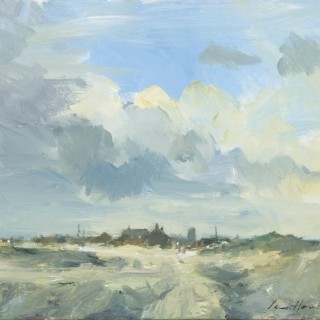 'An East Norfolk Village' Mixed media on canvas by

Ian was born in Gravesend in Kent in 1934. A talented musician, he studied at the Royal College of Music in London from 1950. Soon afterwards he began a part time painting course at St Martin’s School of Art and found he could combine promising careers as both concert pianist and professional painter.

He began exhibiting his work in London in 1956 and a year later while showing at the wildlife specialists Rowland Ward Gallery he met the artist Edward Seago. At the time Seago was a celebrity artist, equally popular with the man in the street and the Royal Family, he had recently returned from accompanying Prince Philip as a friend and ‘tour artist’ on a trip to the Antarctic in HMY Britannia. Seago saw great potential in the young Ian Houston and offered him encouragement from the start, in much the same way perhaps that Munnings had encouraged the young Seago. It was Seago who persuaded Ian to concentrate on landscape painting, a remarkably unselfish suggestion as it was his own speciality. Ian tells us that “Ted was enormously generous and such a nice person. He used to give me a box of paintings to copy.”

In 1964 he moved to North Walsham in Norfolk with his wife and family, where he taught art at the town high school. With Seago as an artistic godfather it was natural to gravitate to the county that had made the great man’s name and whose distinctive ‘flat’ landscapes inspired centuries of artists to subordinate land and man to its towering skies. Solo shows soon followed in Lincoln and Norwich, the latter with Mandell’s in 1974 the year of Seago’s death. The success of the Norfolk exhibition allowed him to buy the sea-going Thames Spritsail Barge “Raybell” in which he subsequently gained his Master’s Certificate. Apart from the pure pleasure in sailing it, the Raybell allowed him to immerse himself in the weather off shore around East Anglia. Particularly sea weather and traditional sail in action, adding an enormous authenticity of experience and knowledge to the depiction of his subjects that so many of his followers now lack.

His paintings have been collected worldwide for many decades and he has held solo shows Melbourne, Australia to Hong Kong. His private collectors include HM The Queen and HRH The Duke of Edinburgh and his work is held in the corporate collections of Barclays Bank plc, Mercury Asset Management, Norwich Union, Robert Fleming Holdings Ltd, The Australian Government, The State Bank of South Australia, The Usher Gallery, Lincoln and Windsor and Newton amongst many others. He became a member of the Guild of Norwich Painters in 1994 and recently became the group’s president.

Ian is described variously as an impressionist or post-impressionist painter, he is the last in a long line of British twentieth century landscape painters that lead directly back to Munnings and Priestman, although through his association with Norfolk painting he is the spiritual heir to the more ancient heritage of Constable and the Norwich School. We are enormously proud to be associated with an artist of Ian’s artistic stature, a great living painter with a page in British painting history secured.

'An East Norfolk Village' Mixed media on canvas by