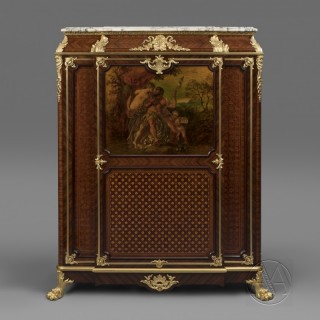 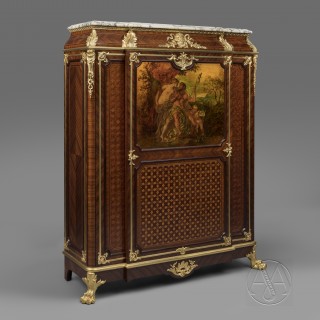 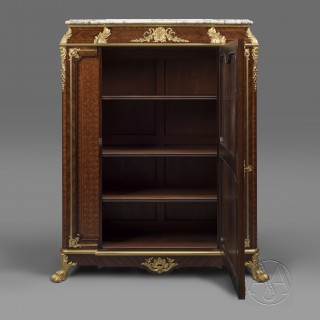 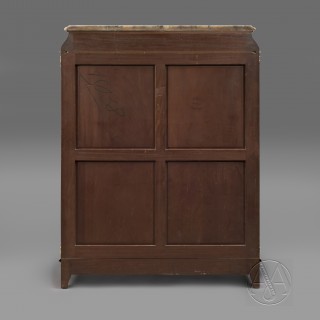 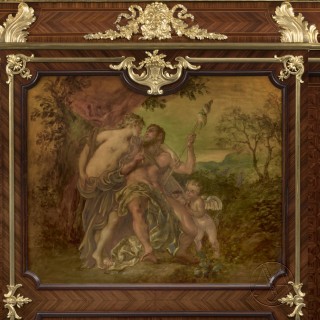 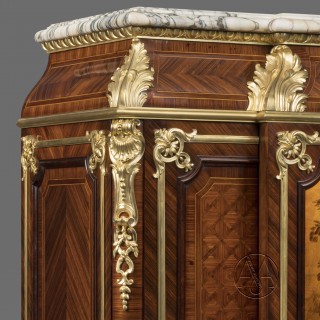 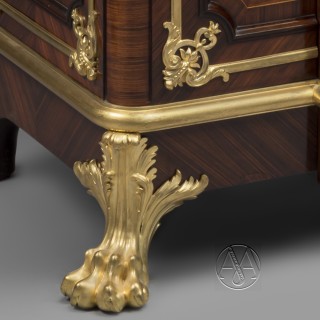 Stamped to the carcass ‘KRIEGER’ and stencilled to the back ‘KRIEGER 74 Faubourg St Antoine Paris’. The lock plate signed ‘Mon KRIEGER Ameublement Paris’.

Of shallow break front form this fine parquetry side cabinet has a shaped grey-veined marble top above a concave frieze with acanthus mounts to the angles and centred by a fine mask of Hercules wearing the pelt of the Nemean Lion. The central door is mounted to the upper section with a superb vernis martin lacquer panel depicting ‘Hercule et Omphale’ after Francois Lemoyne and with parquetry lattice work to the lower section. The cabinet has a shaped apron centred by a fronded acanthus mount and is raised on square section legs to the rear and fine gilt-bronze acanthus cast paw feet to the front.

The exceptional gilt-bronze mask of Hercules to the centre of the cabinet’s frieze can be related to the mask by François-Antoine Vassé on the chimneypiece at the Salon d’Hercule at Versailles.

The superb vernis martin panel is after Francois Lemoyne’s painting ‘Hercules and Omphale’ from 1724, currently in the musée du Louvre (M.I. 1086). It depicts the myth of the Roman god Hercules, who was serving Omphale, the Queen of Lydia. In order to atone for the murder of the prince Iphitus, Hercules had to spin wool for the queen for one year. During this time, they fell in love and Queen Omphale released him from his sentence and the couple were married.

Francois Lemoyne (1688 – 1737) was one of the most celebrated rococo artists of the 18th Century. In 1728, he was commissioned by Louis XV to paint the ceiling of the Salon d’Hercule at Versailles, which he worked on from 1733- 36. The work received great praise and ultimately Lemoyne was appointed Premier peintre du Roi on September 30th 1736.

An interesting letter accompanying this exceptional side cabinet survives from Maison Krieger to Madame J. B. Derangeon of 120 Avenue de Wagram. Dating to 6th January 1913, this letter confirms the subject matter of the fine vernis martin panels as being after Francois Lemoyne’s painting ‘Hercule et Omphale’, which the letter states as being on display in the salle Lacase of the musée du Louvre.

Maison Krieger exhibited at the 1849 Exposition des Produits de l’Industrie in Paris and at the Universal Exhibitions of 1851 in London and 1855, again in Paris. At the 1851 Great Exhibition in London Krieger were awarded a medal for an exhibition oak sideboard made for a client from the Ottoman Empire. Maison Krieger created numerous furniture styles, and the firm exhibited at all the major exhibitions of the nineteenth century up to and including, the 1900 Paris Exposition Universelle.