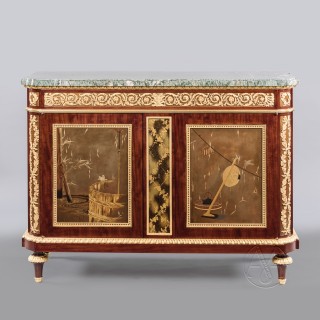 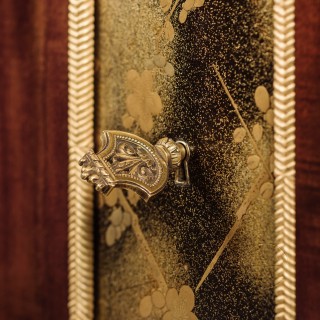 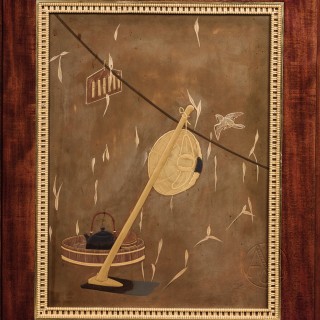 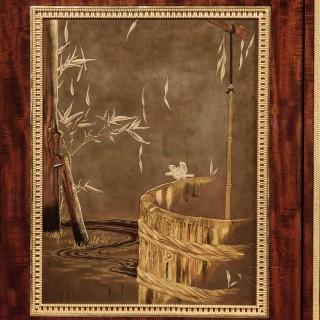 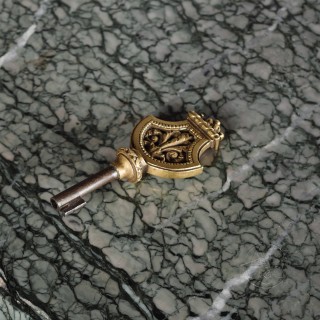 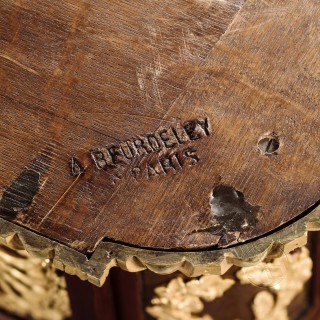 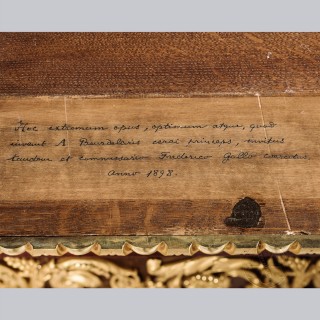 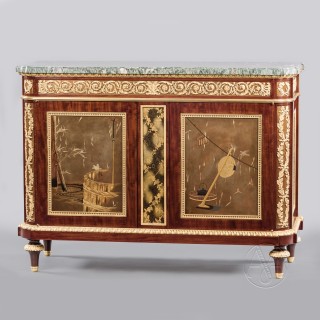 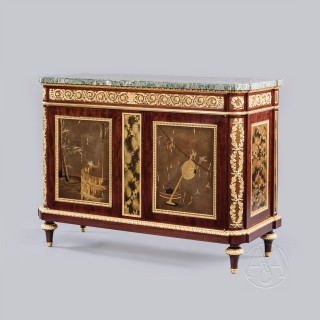 Stamped to the carcass with a ‘marque au feu’ for ‘A BEURDELEY A PARIS’.

This elegant and sophisticated mahogany commode à vantaux or meuble à hauteur d’appui is of exceptional exhibition quality, sumptuously mounted with gilt-bronze and adorned with high quality 18th Century lacquer panels. It is a superb example of the meubles de luxe created by arguably Paris’s best maker at a time when France was at its apogee of cabinet making, pre-eminent in the world.

The commode has a shaped verte de Campan marble top above a frieze drawer with a finely cast and chiselled gilt-bronze frieze of scrolling acanthus set against an Aventurine background; the drawer is spring loaded and opens with two push button releases to the interior. Below are a pair of cupboard doors inset with rare Edo period Japanese lacquer panels, opening to an interior fitted with a shelf and flanked by chamfered uprights embellished with ribbon tied gilt-bronze laurel leaves; the sides are inset with lacquer panels of lattice cherry blossom and the whole raised on acanthus cast toupee feet.

The superb quality of Beurdeley’s mounts led contemporary commentators to often compare them to those of Gouthière. The mounts to this commode are characteristic of his very best work with superb attention to detail in the chasing of the bronze and impressive Mercury gilding.

The principal lacquer panels are mid-18th century, Japanese Edo period (1603-1868) with ‘hiramaki-e’ and ‘takamaki-e’ (low and high-relief) decoration and would have originally formed part of a screen. The panels with their strong agrarian symbolism including a flowing stream and well/pump to one panel and a rice farmers hat ‘sugegasa’ and a hoe to the other, suggest that the screen, from which they were taken, may have originally depicted the ‘Rice Cultivation through the Four Seasons’ or a comparable agricultural motif. The farmer at work was a time-honoured theme in Japanese art, evocative of the seasons and of annual ritual cycles. In keeping with Confucian values, the shogunate promulgated the image of Japan as an agrarian society, with rice the predominant symbol for wealth.

From the mid-18th Century, the demand for lacquer-mounted furniture in France was so great that Parisian dealers, the ‘marchands-merciers’, who specialised in the creation of furniture and objets d’art for a sophisticated and aristocratic clientele would re-use lacquer panels often appropriated from screens and boxes. The lacquer panels were then mounted onto furniture constructed in France and enriched with sumptuous gilt-bronze mounts. In the mid-19th Century, Empress Eugénie’s appreciation of Louis XVI furniture from the ‘ancien régime’ stimulated a fashionable revival for French Royal furniture and the leading makers produced elaborate replicas of some of the most famed pieces from the end of the preceding century.

Beurdeley used high quality Oriental lacquer on much of his finest furniture, for example on his gold medal winning cabinet exhibited at the Paris 1867 ‘Exposition universelle’. His use of lacquer, exceptionally rich and with thick gilt decoration, takes the late 17th and 18th Century practice of displaying Oriental lacquer to new heights. It is interesting to note that Beurdeley, a noted collector, was willing and indeed able to sacrifice an 18th Century Japanese lacquer piece to veneer his own work. By contrast, a generation later in 1908, François Linke sent a commode of Louis XV style, a copy of the celebrated model by Joseph Baumhauer, to Japan on the Trans-Siberian railway, to be lacquered by Akatsuka Jitoku (1871-1936).

Beurdeley was celebrated for his outstanding facsimiles of important royal furniture and objects from the ‘ancien regime’ but he also created new forms and adapted designs for extant models to create ‘meubles de luxe’ of great innovation. The origins of the design for the present commode can perhaps be found in the work of 18th century ‘ébéniste du Roi’, Jean-Henri Riesener and in particular his commode made for Marie-Antoinette in the 1782 for her cabinet at château de Marly. A related commode, identical in form and with the same mounts as the present example, signed ‘A. Beurdeley à Paris’ and ‘Garnier’ is recorded. This commode however incorporated the more familiar marquetry panel of Riesener’s original, instead of the expensive 18th Century lacquer panels.

The top of the present commode contains an interesting inscription in Latin dedicated to the auctioneer Maitre Lecocq, dated 1898:

“Hoc extremum opus, optimum atque, quod invenit A. Beurdelaris ærei princeps, invitus tandem et commissario Frederico Gallo coercitus” (Here is the latest piece, even more remarkable, that A. Beurdeley, the master of the art of bronze, has created, despite the constraints put on him by auctioneer Frederico Gallo. Year 1898).

After ceasing production in 1895, there was a sale of Beurdeley’s stock, which was sold by auctioneer Maitre Lecocq. Due to the large scale of the firm, it took 7 sales beginning on October 19th 1897 and ending on October 18th 1898.