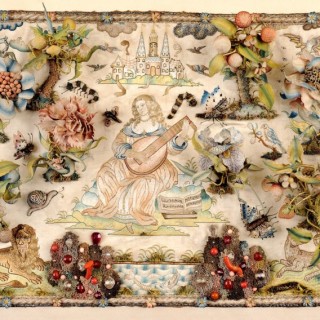 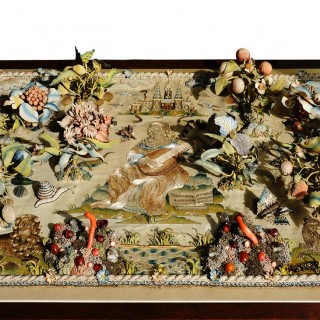 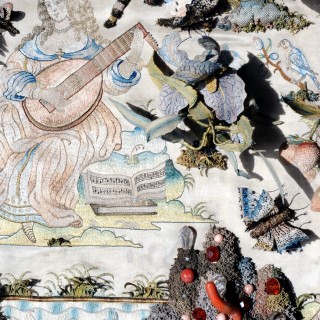 English embroidery worked from the late sixteenth and through the seventeenth century has long been regarded as amongst the most important and appealing of the domestic decorative arts. This example of mid seventeenth century raised work not only reflects the culture, religious belief and aesthetics of the period but also exemplifies the contemporaneous belief in the creative, virtuous and morally beneficial nature of embroidery indicative of female accomplishment.

The exceptionally raised flowers and fruiting trees, the finely detailed insects, and the rocky pool depicted in this embroidery, reflect the seventeenth century popularity of flower gardening and the natural world .The floral and plant forms found in Stuart embroidery were often based on the close descriptive observations of actual plants and flowers found and reproduced from the primed herbals of the day. Individual flowers were often chosen and used as a metaphor for human love, whilst the assemblage of different flowers and oversized fruits all found sprouting from the same stem, not only reflected the contemporary interest and experimentation with the grafting of fruit trees but would have also been recognised as a metaphor for the bond between man and God . Not only could society enjoy the flowers and plants for their purely secular meanings and aesthetic appeal but they also were able to understand them as an illustration of the theological Protestant interpretation of nature as God’s creation, an embroidered Garden of Eden.

Seated at the centre of this embroidery is a female figure playing a lute, with her open sheet music propped up upon a closed book. This figure is seen on a number of Stuart embroideries and represents both harmony and hearing. The convention of the senses personified by women was one well established by the mid seventeenth century, and followed on from the popular allegorical prims produced and sold in England from the 1620s, perhaps best known of these is the series produced by Wenceslaus Hollar.

The inclusion of the figure of Harmony, is found on a number of casket and cabinet lids in museum collections around the world and it may well be that this panel was intended as either the lid or to sit inside the top of just such a casket. This example is highly unusual and noteworthy because of not only the height of the raised work, but also because of the delicacy of embroidery, making it not only one of the most decorative examples to have been offered on the open market but one of the most technically challenging examples of seventeenth century raised work embroidery that we have had the privilege of owning.