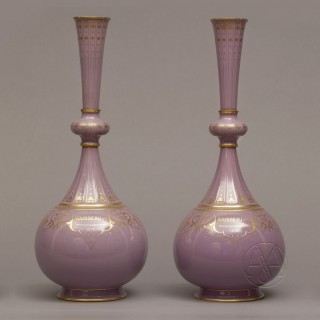 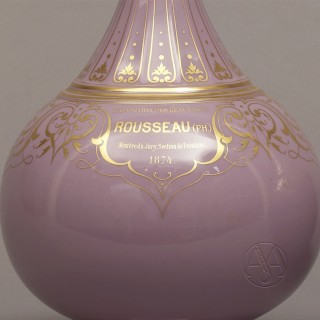 The incised initials almost certainly refer to François-Alexandre David, gilder and painter at the Sèvres manufactory between 1844 and 1882.

Each vase is of an unusual pale lavender colour, the distinctive ‘bottle’ shape with elongated faceted necks derived from early Persian metalware. They are described in the Sèvres records from 1874 as ‘Vase Bouteille Persanne’.

The Salon, the official art exhibition of the Académie des Beaux Arts in Paris, was generally thought of as the most important annual exhibition in the world. As well as being a showcase for established artists, the exhibition gave up-and-coming artists the chance to present their work to discerning viewers. In April 1874, a group of artists, the ones rejected by the Salon jury, opened an exhibition independent of the Salon as the Société Anonyme des Artistes, Peintres, Sculpteurs, Graveurs. This was to be the first true exhibition of Impressionist art; the contributing artists included Cézanne, Pissarro, Renoir, Degas, Monet, Manet, and his sister-in-law Berthe Morisot.

It was not until 1756 that it moved to the village of Sèvres, west of Paris, strategically placed en route to King Louis XV’s palace of Versailles. Here it was also adjacent to Louis’s mistress Madame de Pompadour’s own château at Bellevue. A great lover of Sèvres porcelain, she was delighted with the factory’s new location – as she knew she could entice Louis to take a greater interest in it when it was so near to their own residences.

Indeed, the King became such a keen patron of the factory that when in 1759 it ran into financial difficulties, he bought out the shareholders and became the sole proprietor. The factory remained a royal enterprise until the French Revolution, when it was nationalised. Sèvres’ position at the beginning of the nineteenth century was extremely precarious. No longer a royal enterprise, and having lost much of its clientele during the revolution, its funding reflected the ruinous state of the French economy. However the Manufactory rose to this challenge, achieving the remarkable accomplishment of staying continuously in the forefront of European ceramic production despite the myriad changes in technology, taste, and patronage that occurred during this tumultuous century.

The vast and diverse production of the Sèvres factory in the nineteenth century resists easy characterisation, and its history during this period reflects many of the changes affecting French society in the years between 1800 and 1900. Important designers and influential artistic directors were always at the forefront of Sèvres’s innovation.

Famous artists who designed for Sèvres have included Louis-Simon Boizot, Théophile Fragonard, Hector Guimard, Serge Poliakoff , Auguste Rodin and Louise Bourgeois. One of the most influential artists was Albert Ernest Carrier-Belleuse who became artistic director in 1876 and was famed for his designs.