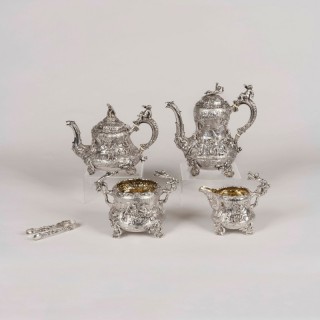 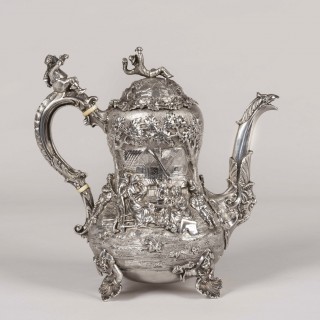 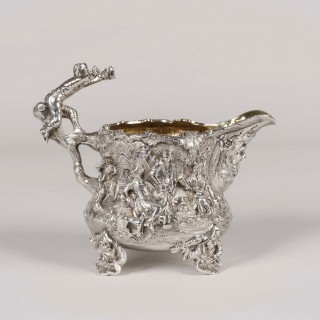 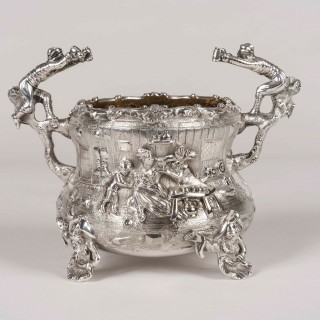 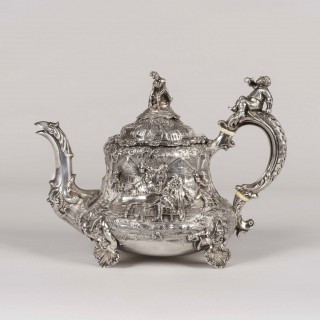 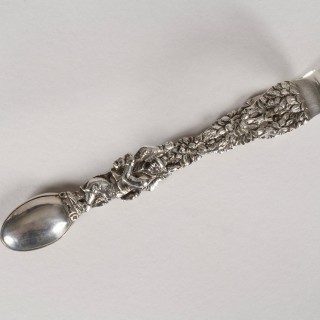 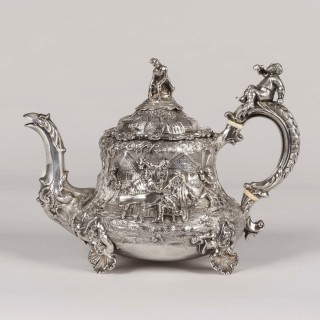 Assayed in London in 1852/3, the solid silver 4-piece service in the manner of Edward Farrell decorated in high relief with scenes of merry-making and tavern interiors in the style of David Teniers. The handles and lids having free-standing jovial figures perched atop. Each piece bearing the maker’s mark of Joseph Angell as well as the retailer’s mark of “Thomas’s of Bond Street.” With later associated solid silver sugar tongs. The whole set housed within an oak box marked “Goldsmiths Alliance Limited.” Several pieces by John Angell dated to the mid-19th century are in the permanent collection of the Victoria & Albert Museum.
English, circa 1852/3.

The firm of Joseph Angell and Son was one of the largest and most important silversmithing and jewellery, manufacturers and retailers in London in the mid-19th century. Its origins can be traced back to the late 18th century when Joseph Angell was apprenticed to Henry Nutting, goldsmith of Noble Street, on October 5, 1796. Joseph Angell entered his first mark as a plateworker at the London Assay Office on October 7, 1811. At first the firm established by Joseph Angell began as manufacturing silversmiths to the trade, supplying Rundell Bridge and Rundell and Hunt and Roskell amongst many others. It was only ca. 1849 that they opened their own retail premises at no.10, The Strand. On the retirement of Joseph Angell (senior) in January, 1848, his son, Joseph Angell (junior) continued the family business under his own name (and with his own mark). Joseph Angell junior participated at the 1851 Great Exhibition (he was awarded of a Prize Medal for his enamelled articles), the 1853 New York Exhibition (bronze medal) and the 1862 International Exhibition (another medal).