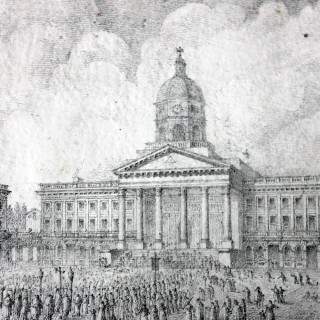 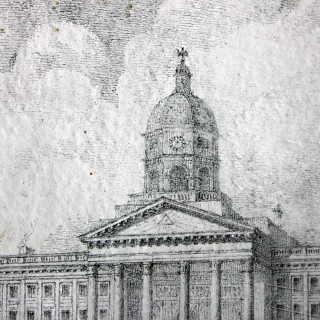 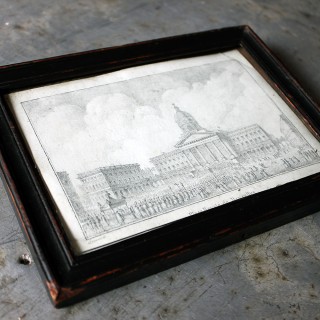 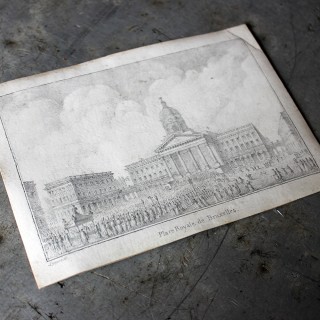 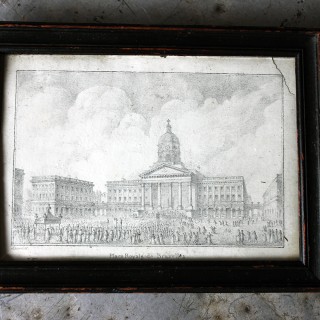 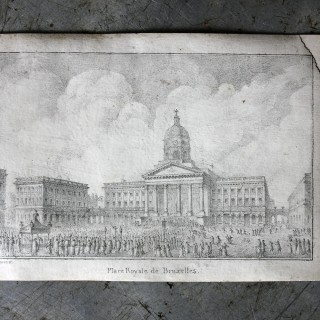 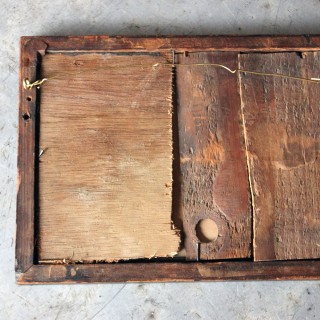 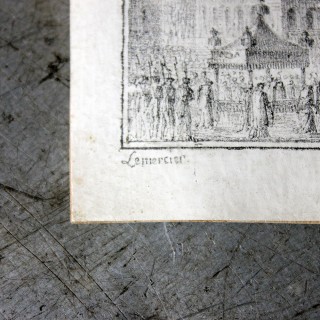 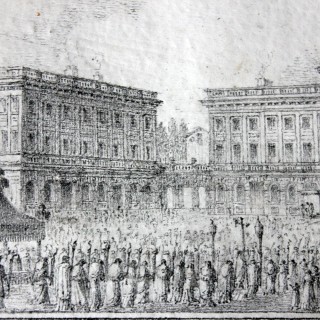 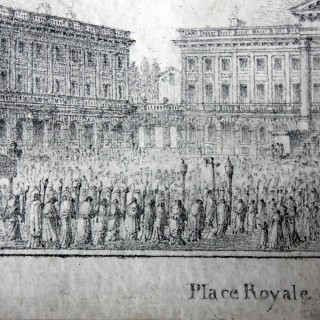 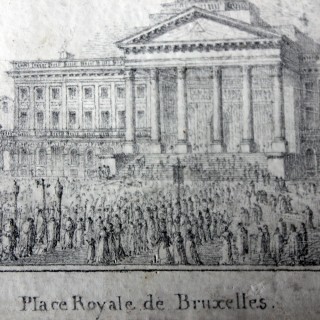 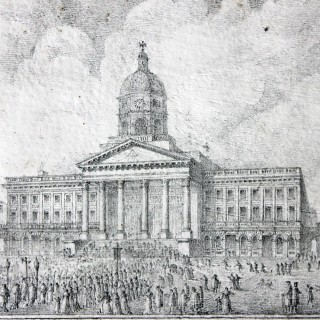 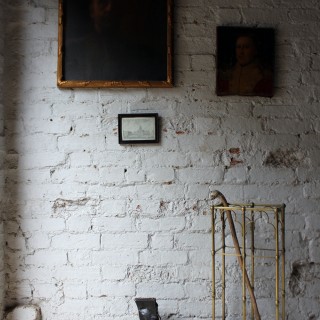 The very fine and highly detailed French school study of the Place Royale de Bruxelles executed in pencil, almost certainly depicting the coronation of King Leopold I in 1831, the work backed onto card and presented in the original ebonised moulded frame and surviving from the Luois Philippe period, drawn by Rose-Joseph Lemercier (1803–1887) and signed lower left to the margin as such.

This drawing depicts the bustling activity, almost certainly of the coronation of King Leopold I in The Place Royale (French, “Royal Square”) or Koningsplein (Dutch, “King’s Square”), which is a historic square near the center of Brussels in Belgium. The original palace burned down during a fire that took much of the original royal complex on the night of February 3, 1731 with construction of the new buildings around the square taking from 1773 to 1780, using the design of French architect Barnabé Guimard, who received that commission in 1769. The square is almost an exact replica of the Place Royale in Reims.

In 1831, the coronation of King Leopold I, Belgium’s first king, was held in the place, which is almost certainly what is depicted here as we can see the Royal throne being carried. On 17 July 1831, Leopold travelled from Calais to Belgium, entering the country at De Panne. Travelling to Brussels, he was greeted with patriotic enthusiasm along his route. The coronation took place on 21 July on the Place Royale in Brussels. A stand had been erected on the steps of the church of Saint Jacques-sur-Coudenberg, surrounded by the names of revolutionaries fallen during the fighting in 1830.[12] After a ceremony of resignation by the regent, Leopold, dressed in the uniform of a Belgian lieutenant-general, swore loyalty to the constitution and became King.The coronation is generally used to mark end of the revolution and the start of the Kingdom of Belgium and is celebrated each year as the Belgian national holiday.

There are two similar drawings by Lemercier in the archives at the Met Museum, one for the design for a triumphal bridge and the other for the palace of Neptune.

Born in Paris (Seine) on July 6, 1803 Rose-Joseph was a printer, artist and lithographer in Paris. The son of a basket-maker, an “old soldier of the Republic and of the Empire” he became a basket-maker himself at the age of fifteen. Four years later, he was hired as a “graineur or man of pain” by one of the only Parisian printers-lithographers Lenglumé who trained him in the trade. Two of his brothers – the family has 17 children – Gabriel (1807-1889) and Ambroise (1817-1889) exercise the same trade. In 1824, he married Marguerite Drancy of which they bore two children that sadly died in infancy. Rose-Joseph Lemercier obtained his lithographic printer’s license in 1828 and settled in his own company, first at 55 rue du Four Saint-Germain and then at 57 (or 55) rue de Seine in a former gambling hall; the company would be named Lemercier et Cie which became a huge Parisian firm of lithographic (and later photogravure) printers. At his death in 1887, it was his nephew Alfred who succeeded him until 1901. He was appointed a Knight of the Legion of Honor in 1847, and promoted to officer in 1878. “The lithography of M. Lermercier is the rendezvous of the first artists, who like to entrust to him the reproduction of their inspirations ” it was said. He was interested in photography since 1839 and he then developed lithophotography in 1852.

An exquisite study by the very hand of an important figure in the history of print, lithography and, indeed, the art world itself.

The condition of the drawing is relatively good and is in as original order as you would want to find it. There is darkening and yellowing to the paper and some foxing throughout so the picture does appear in aged condition with a small tear to the top right, with no attempts at restoration or cleaning. The ebonised frame is original and shows some nice decorative wear.